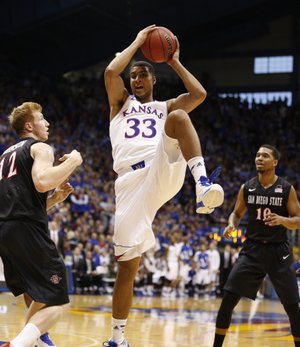 It seems that Self will rotate Mickelson/Lucas at the 5 with Alexander mainly at the 4 spot. Self has all the other guys, including Ellis, working on their perimeter game. We are going to need the length, along with toughness, to compete with UT, KY and others. It’s Lucas’ time and after 3 years prepping, he should be ready to contribute.

The starting line up will be Alexander and Ellis in the post, Oubre, and Selden on the wing, and whoever wins the PG job. Traylor will be the first big off the bench, and Lucas and Mickelson will be fighting to be the 4th big the rotation.

Aaron we play that starting lineup first game of the season, we will have another 10 loss season. You are expecting Perry and Cliff to protect the rim and rebound, sorry that is just not going to happen, they will isolate Cliff and Perry is soft. We have at least 7 games, probably 11 against tall talented teams that will pound it inside without a 6'10" player in there. Maybe in conference play those guys will start together but I would rather have someone that can protect the rim without fouling, then Perry and Cliff in there.

2 of the 3 most successful teams in the Bill Self era did not not have a rim protector in the starting line up. The national title team had Jackson and Arthur as the starting post and the 2010-11 team had the Morris twins start. So, please tell me why KU can't be successful this year without a rim protector in the starting line up? Bill Self has always started the two best post players regardless of their 4/5 designation and always will. Christian Moody is the only exception to this trend at KU.

You may be right. Self is probably trying to build in flexibility and options. We'll see how the pieces come together in October- December.

We start your 5 and we will have issues all year long, especially against taller teams. Perry is not Jackson or Arthur on defense, not even close please. Morris twins, seriously you are using them as examples as great defenders? Even with that said they were better than Perry on defense too. Perry is soft and disappears at time. If we leave him in there Cliff will help out and pick up fouls, which will reduce his presence in games. If he doesn't foul we will be chasing games again from being behind. Self will play the guys who can defend first this year. Perry is not top 5 on this team with his defense. You are dreaming if you think there will not be a much stronger emphasis on defense since his team is shorter than usual. Perry played with two great shot blockers, this year he is going to need to play better at defense to start. He will not have a swatter behind him to clean up the mess. Hunter has a chance to start if he can protect the rim, Same with Lucas. Perry and Cliff and Kelley together yikes that sounds like a train wreck.

Mickelson is something of an X-factor right now. He's proven as a shot-blocker and he's had good reviews in practice in the past, but we haven't heard anything about him all off-season. Coach has billed him as a shot-blocker and a pick and pop guy since he signed with KU, but if he's not ready to start by November then Alexander will likely start as a 5. I expect Alexander to have serious foul troubles early on though especially if tasked with protecting the rim, similar to a young TRob and just about any other young post that Self has brought in. In which case we probably will see a rotation of guys (Cliff, Traylor, Mickey, Lucas) playing alongside Ellis in the post trying to protect the paint.

Because of his length, I thought that Lucas should've played more in the Stanford game.

I hope like Traylor last year, this is a breakout year for Lucas. He showed signs last year. Now he needs to build on it, and if so he will provide quality minutes.

Ellis is strictly a 4. Coach Self had him practicing on the perimeter on defense - primarily because some clubs, such as Iowa State, will require that our bigs roam out to defend their outside shooters.

It doesn't always matter who starts, but a lot can ride on who's playing well, providing good defense, and match ups. I see some good diversity in this team, and experience that was lacking last year. We won the big 12 title with a lot of new players. This year that's not quite the case. I trust Self.