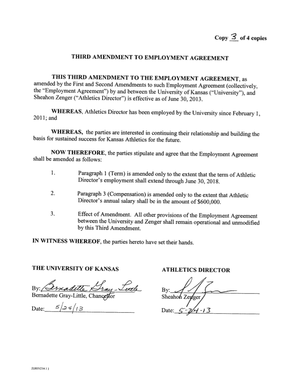 Zenger, who took over at Kansas in February of 2011 as the replacement for Lew Perkins, made $450,000 annually during the first two years of his initial five-year contract, but has received a 33 percent raise to an annual salary of $600,000. The new contract also extends Zenger’s agreement through June 30, 2018.

The increase brings Zenger’s salary into the middle of the pack of 10 Big 12 athletic directors and is $116,000 less than the average salary of the conference’s ADs, according to numbers obtained and reported by ESPN.com.

According to a spokesperson from KU Chancellor Bernadette Gray-Little’s office, two-thirds of Zenger’s salary is funded by private, non-taxpayer, non-tuition funds, and the remaining $200,000 is paid by the state because Zenger is a state employee.

The raise and extension come on the heels of one of the most successful department-wide stints KU has had in recent memory. During Zenger’s first two years in charge, the women’s track team won a national championship last spring, and the men’s basketball team won its eighth and ninth consecutive Big 12 titles and played for a national championship. In addition, the women’s basketball team made back-to-back Sweet 16 appearances, and the volleyball and soccer teams are coming off NCAA Tournament appearances as well.

He also led a coaching search that landed football coach Charlie Weis, who kicks off his second leg of a five-year, $12.5 million contract at 6 p.m. Saturday against South Dakota at Memorial Stadium.

Say what you want. Z's pretty awesome. Just to keep all of the "players" in play coaching wise... and fire Gill in a $$$$$ losing situation, not to mention hire one of the best QB coaches in the history of football to replace him.. Hats off.. I'm happy with him.

Yeah, and if Weis really turns the table the next couple of years and Z is able to keep him, he will get an even bigger raise. This will be a case where the retention bonus is paid to the AD instead of the coaches. One for keeping Self, one for keeping Weis. Of course, they will get the longevity bonuses. And the Chancellor gets a bonus for staying out of it altogether.

Unbelievable! The wheels were in motion for all of the successes mentioned long before Zenger became AD including Bonnie's teams continuing to under achieve. Last I checked the football team won one less game last year than it did the year before. That is the REVENUE sport that is needed to pay his salary! It (his salary) should be last in the Big 12 at least until we can win a conference game!

As for hiring "..one of the best QB coaches in the history of football.." all I can say is WHAT? That has nothing to do with anything! Ok, so let Weis coach the quarterbacks. I might be ok with that but let's get a head coach that knows how to win college football games. I don't care about putting QB's in the NFL while we are stuck at the bottom of the Big 12.

its about more than just football. he is the athletic director, not the advisor of football operations or what ever. he is doing good things for the athletic department and if you can't see that, then maybe you should think about the long term and not the short term.

the rock chalk park, renovations to AFH and Memorial, among other things are all helping the Jayhawk brand. he is doing a great job and I am glad that we have him.

You are right the football team did win one less game than the year before. But you obviously didn't follow the team very close. Last years team was so far a head of either of Gills teams. Weis took a crappy team removed 30 players and made them worse. Yet he some how got them to play and play hard. They may have only had one win but they had many close games that had Gill still been the coach we would have probably lost by 40. I'm excited about this season he has the kids believing. RCJH.

They did not look like they played that hard in the last two games last year versus ISU and WV.

Yes you are right about those two. They were ugly.

The QB position is the most crucial on the field... So by your name, I'd guess you rather have Mangino back... he wasn't half the recruiter that Weis is.. I liked MM and all, but he kinda fell into the perfect storm with a bunch of great Recivers, an immensley talented, overlooked Texas QB (Reesing) and happened to have a pro-bowl level CB playing for him. MM did develop some talent, sure, but the recruiting classes in his last two years were absolute turds.

You made the ridiculous statement that he was the best QB coach in history. Let's give him credit for what he really is. Loser at Notre ND. Loser at Florida. Road skirt tails at the Patriots. Had one lucky year with the Chiefs. That constitutes a $2.5 million per year contract at KU? Sorry, but this is Zenger's win or lose hire. Just offering Bill Self the most money of any college coach doesn't really speak to an AD's ability to sell a program.

A bit premature. I would have waited to see how the Charlie Weis stock does in the coming season.

Zenger is a good fit for this job. He is much more personable than his predecessor, which is essential towards building relationships with alumni who are the ones that provide much of the revenue to keep the athletic program competitive in the Big XII. He is clearly driven to make all sports at KU more competitive as demonstrated by changes in coaching, including football, golf, and tennis, since he took over. He is willing to make the hard decisions with a view towards putting KU on the map at sports other than just men's basketball. For the first time in a long while the KU women's athletics finished in the top 10 (#8 with 72 points) of the NCAA Capital Cup in 2013 (clearly helped by a national championship in track but also by improvement in basketball, soccer, softball, and volleyball). In comparison the men finished tied at 63rd with Appalachian State (both with 9 points) (clearly KU suffers by having fewer men's teams than other schools but more importantly by poor performances nationally outside of basketball). Hopefully, Zenger can continue the effort to build a nationally recognized athletic program at KU, which will help promote philanthropy and more importantly maintain a strong student body.

While I think Zenger has done a decent job, I find a 30% raise to be excessive given that most everyone else at the university has hardly seen a raise. I do know that the athletics department has not turned a profit during his tenure. He will be judged on what the football team does. He hired Charlie Weis. At this point, I'm not sure that was a slam dunk hire but be needs more time and will get every opportunity to succeed.

Umm...the Athletics Department is a non-profit.

I'm OK with this - he should make what other B12 Athletic Directors make. If Weis turns it around and we win 8 games in a couple years, he absolutely deserves his money. And think about the crooked, horrible situation he inherited.

Zenger took the job at less than HALF of what his predecessor made--and it is clear his predecessor wasnt HALF as talented as ZENGER. He is still paid less than the Texas AD--the Oklahoma AD etc, and STILL makes way less than the prior KU AD.The predecessor brought scandal --Zenger brings class, motivation and and accessability. They better pay him what he is worth to the tune of what Texas and Oklahoma pay or he will eventually work for them as a matter of pure economics.

So all of the people who were furious that our Chancellor got a $60,000 bonus from private funds are just fine with this salary? Really?

Im fine with the 60k bonus for the chancellor as well. You cant expect to buy and keep a Ferrari for the price of a Pinto--and you cant expect to keep and retain the top talent by paying less than what the market calls for.

The bump in salary puts him on par w/ other ADs in the conference. No issue with that. Going forward, any increase should include how the revenue producing sports are doing. As much as I love KU hoops and Allen Fieldhouse, nothing beats 50k seats in Memorial from a $$ standpoint.

Zenger is a quality guy, no question. And he's worth whatever ... pay him his annual salary. The issue that has bit us on the butt ... time and time again isn't the annual salary, it's the long term contract terms. We have paid $20 million dollars to Mangino, Perkins and Gill (including their staffs) to NOT work at KU. This is BEYOND their annual salaries. Zenger had a 5 year deal, if we want to increase his annual comp, fine. He had 3 years left on his contract ... so, give him a raise. There's no reason to give him a new 5 year deal. If you disagree, ask yourself if this same exact strategy with our previous regime was a good idea. If you say, "yes", then YOU can send YOUR money to the Williams Fund. It's easy for AD's to give long term deals to coaches. Apparently, it's easy for Chancellors and other university officials to give long term deals to AD's. My take is ... pay 'em what they're worth, don't guarantee them long term deals ... we've paid $20 million dollars in penalties because we've done that in the recent past ... as someone who gets solicited for money each year, I'm tired of it.

Great..lets extend the contract of a guy that has taken some football and basketball games away from Kansas residents. Get ready for the blackouts...Thanks greatly Z.