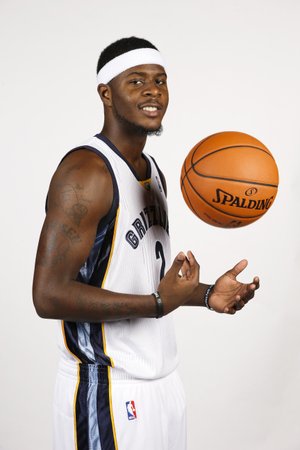 Cleveland — The Cleveland Cavaliers on Sunday released former Kansas University guard Josh Selby, whom they acquired in the deal with the Memphis Grizzlies that also brought Mo Speights and Wayne Ellington to Cleveland. Selby was immediately assigned to the NBA Development League’s Canton Charge and never appeared in a game for the Cavs.

Selby was selected 49th overall by the Grizzlies in the 2011 draft. He averaged 2.2 points, 0.9 assists and 7.8 minutes in 38 NBA appearances in two seasons.

The Cavs now have an open roster spot, but are expected to use it as a tryout for players on 10-day contracts. It won’t be used on Greg Oden, who is leaning toward waiting until the summer before signing with an NBA team.

Should not have left so early. He didn't have the chance to develope for an entire year. Still, he made some good money and can continue to build on that overseas. I just hope he has and will spend wisely.

In hindsight, he should have stayed in school. This is what happens when players are ranked Number 1 out of High School. They believe the hype, and too many leave for NBA, when they are not quite ready. His best game at KU was unfortunately his first game. He was always compared to Kyree Irving. Now it seems that he is not able to be Kyree Irving's back up in Cleveland. I guess now it just depends on how much he wants it? Josh is extremely talented and I believe he will land on his feet. The NBA is not just basketball. It is a job. Hour upon hour of film study, weight training, and practice. There is always someone looking over your shoulder and trying to take your place. Good luck to you Josh!

Would've only been a junior

Most likely, he would have been pretty good as a sophomore and jumped. He could have been a nice addition to last years team... A team that lacked depth and a 3rd scorer!

He will land on his feet - somewhere like Istanbul, Seoul, or Panama City.

The NBA is not the place to go if you are not fully prepared and brimming with confidence, especially a guard. Michael Jordan used to destroy guys fresh out of college (Phill Sellers, etc) that thought they knew it all but were unprepared.

Although BMac should stay another year to improve his ball handling skills, being a top 5 draft choice indicates those teams will work to develp him. With the possible exception of Noels, none of those KY players should try for the NBA and should provide guidance for Wiggins and Randall's selection choices.

Sure wish he would have remained another year as it would have helped him tremendously. However, he and his mom chose to leave. Really hope he can do well.

Xavier Henry is another top recruit who left after 1 year, and is languishing on the bench in New Orleans..

There is no "hindsight" about this at all. Selby was an absolute fool for going early and most knew it at the time. He had a few moments but never conquered the college game. He was the number one recruit out of high school who had star written all over him but stars need seasoning. I have no doubt that he is more talented than many of the star guards in the NBA, but it takes more than talent to succeed. I root for all Jayhawks, including Selby, but most saw this one coming a mile away. An absolutely terrible decision.

I pray I am wrong, but if the same people who told him to jump early are the same ones who are influencing his spending, the kid is heading towards bankruptcy.

Mclemore is NBA ready now, though I could find it in my heart to watch him again next season.

On the other hand, it's a tragedy that Xavier Henry and Josh Selby will never be solid NBA players. The biggest reason is leaving early. Sad.

Kind of interesting as they cut him and aren't even looking to do much with the spot - "Eh, we'll fill it with a 10-day contract guy."

Honestly, I think the Cavs were already doing well at both G-spots though, both for starters and even with their backups. I didn't like him leaving what was a better situation in Memphis for one that seemed tenuous at best in Cleveland. I remember Washington dealt away Jordan Crawford for L.Barbosa who's out for the year. Maybe, he could catch on w/ the Wizards who are pseudo-near his hometown of Baltimore.

Isn't it amazing that so many of those "one-and-dones" are doing very little at the next level? The NBA needs to 1) go the same draft rules as baseball and 2) establish a real, minor league system, perhaps only one or levels worth.

The reference to Greg Oden reminded me that Kevin Pritchard was the Portland GM at the time that Portland picked Greg Oden over Kevin Durant in the draft. Has Kevin ever said whether that was his idea or owner Paul Allen's idea?

I remember at the time of that pick, the obvious thought went through my mind: Sam Bowie redux. Poor Portland; first they pass on Michael Jordan, then Kevin Durant. Talk about blowing your opportunities!

Oden was the better pick at the time. Nobody could have foreseen the injuries. When he played, he was very good. It's not like he was a Kwame Brown type bust.

Please. Oden had size and that is what had all the GM's drooling. Durant was going to be a star, everyone knew that. What was not as certain, was that he was going to be a superstar. But watching him over the course of one year, you knew this kid was the "can't miss" prospect. Oden was a gamble BECAUSE of his size. Big guys tend to have problems with their knees and feet. And that is exactly what happened.
Whoever in Portland decided to pass up Durant deserves to be out on his a$$ w/out a job because passing up a sure fire all-star for a maybe is idiotic

On the bright side, coaches like Self can hopefully use Henry and Selby as examples of what not to do. Throw in Julian Wright for good measure. Point out that the difference between a LeBron James, Kobe Bryant, John Wall and Kyree Irving and the next best guards are real and measurable. You can play on their team, but you aren't in their league. Most of the prospective players need to see themselves as players who developed great skills, rather than they were born with them. And maybe some of these AAU coaches deserve to be "bad mouthed" for over hyping these kids and filling their heads "with visions of sugar plums.

Josh Selby and Xavier Henry are both a few days shy of reaching their 22nd Birthday. 22 Years old! Their adult lives are just beginning. It remains to be seen what the future will hold for these young men. As long as they keep seeking self improvement, I think they both have an excellent chance for success playing professional basketball. I wish them both the best, on and off the court. Getting cut by an NBA team does not mean life is over, it just means lace em up and try harder. That's life.

Selby and Henry were both so clearly not ready for the NBA. They were rarely,, if ever, even the best player on the court in college. Julian Wright is another example of should've stayed...although he was more ready than the previously mentioned guys. Nobody on here will agree with this next statement but oh well.....McLemore isn't ready either. Here's why I say this. He is a ghost away from the field house. His confidence just seems to disappear. He can certainly go to the NBA and will probably even have success, but to be really bangin right out of the gates, another year of honing skills under Self would really help his transition. To be honest, the fact that he is considered the #1 shows how weak the draft class is. McLemore is amazing and has had some big games, but he has not been a dominant player. Even in those 30+ pt games he is kind of a silent killer, not a stone cold killer like other #1s. He is not anywhere near the level of D Rose, Durant, LeBron, etc when they went pro. The opposite argument could be considered when you think of Kyrie Irvin

Here's wishing Selby well. He did nothing, at least nothing egregious, to spite KU, and most people mention his name here with some varying degree of disgust. As Greg Anthony put it at halftime of the WVU game, basketball is a game of mistakes. Yes, he would have been drafted higher had he stayed longer, but everyone must make his own mistakes. And who knows, he may have still been cut had he stayed on longer. Sure, we won't cherish him as we do this senior class, and seniors who came before them. Look at Cole - who doesn't like him? He's essentially anonymous in the NBA, but we don't begrudge his decision to leave early. Etc, etc. Remember Selby's game against USC and how excited you were he chose KU, however fleeting.

I think those blessed with advantage of hindsight, should cut the kid a break. He is from an impoverished background and had a chance to make millions. It is understandable that he decided to take a chance on dream of an NBA career and forgo the remainder of his college career. There are going to be many J. Selby-like players to come through KU and every other top program. It is a fact of life. There are going to be one-and-dones. Some will flourish in the NBA, some will flounder and then kick around the D-league and Europe. It is unnecessary to kick them while they are down, because things do not turn out quite like they hoped and dreamed. Just because you leave after one year, doesn't mean you are not a Jayhawk and that they don't deserve the support of the fan base. I would love to see every kid stay the full four, but that is for selfish reasons (no pun intended). If we want 5-star recruits, we cannot complain every time one doesn't stay as long as we like. And, flounder or flourish, we should support them after they go. It is immaterial now, whether Selby was ready or not when he decided to enter the draft early. He went. We should respect that decision and support every former Jayhawk after they leave.

Sorry to be "all by my lonesome" on this but I'd just as soon the Selbys, Henrys and McLemores never came to KU. I'll be asked to eat my words if we win the NCAA tourney and probably choke on them. But here's the thing. Ben and the others took up space on the roster that may have gone to another athlete that was talented and could have developed into a first-rate player--one that would stay for four years and help the team to a title.

A better recruiting method would be to require all recruits to commit to stay 4 years and prevent him from playing in the NBA or elsewhere until his class "graduates." Yes, KU could do it; its a matter of contract law. And yes, we'd lose out on some prospects, but not on ones that are interested in a degree.

If you don't think a degree is important, you should watch the televised program on just how many professional athletes are in bankruptcy shortly after they leave their sport.