Lawrence mother Shelly Howard is pictured with her 2-year-old son, Manning, and her newborn daughter, Reesing. The children are named after Jayhawk basketball great Danny Manning and current quarterback Todd Reesing. Howard and her husband, Doug Urish, have even decorated Reesing’s room with a giant version of the Jayhawk logo.

Two of the littlest Jayhawks fans in Lawrence have some big KU names to live up to.

Do you have a child who is named after someone famous? 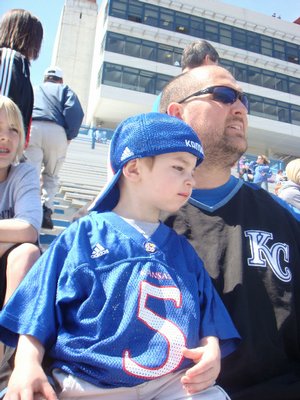 Manning Urish wears a Todd Reesing No. 5 jersey at the 2009 spring KU football game at Memorial Stadium. He was at the game with his father, Doug Urish. 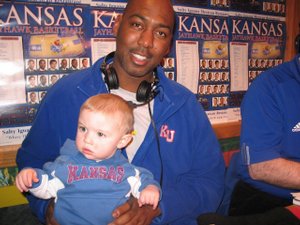 Manning Urish met Danny Manning in January 2008 at a “Hawk Talk” event at the Salty Iguana in Lawrence. Manning was 1 year old at the time. He also has an autographed basketball from his Jayhawk namesake.

Prominent features: “She has very tiny hands,” Mom says of her daughter and, come to think of it, Todd Reesing. “They already have some similarities.”

Two of the littlest Jayhawks fans in Lawrence have some big KU names to live up to.

And proud parents Doug Urish and Shelly Howard are very much looking forward to it.

The dyed-in-the-crimson-and-blue couple’s two children are destined to carry their parents’ Jayhawk loyalty for life, as their first names are taken from the last names of two of the greatest players ever to don KU uniforms.

“It is a lot of pressure, but we hope they can handle it,” Howard said of their two children, Manning and Reesing.

Manning, who is 2 1/2, takes his name from basketball legend Danny Manning — All-American, Player of the Year, national champion, top overall NBA draft pick and now assistant coach for the Jayhawks.

Reesing, born two weeks ago, is named after Todd Reesing, who so far has won an Orange Bowl, set passing records and has quarterbacked this year’s football team to a 4-0 start.

“A lot people think we’re crazy,” admits Howard, who works at Golf Course Superintendents Association of America and is completing her communications degree at KU. “We don’t think we’re crazy. We love it. If we were really forcing it — like, naming them ‘Bill Self’ or something — then that’d be different.”

The kids won’t be missing out on many opportunities to follow their elder namesakes. Urish takes young Manning to “Hawk Talk” radio shows, the spring football game and Late Night at Allen Fieldhouse, and the smiling boy obliges by waving the wheat, saying “Rock Chalk Jayhawk” and wearing seemingly every KU fashion available.

In his bedroom, a signed souvenir basketball above his bed even carries the written blessing of the man whose name he shares:

The recently arrived Reesing, meanwhile, will grow up with a less-subtle reminder of her folks’ favorite quarterback. In her room, Urish has painted “REESING” in dark pink letters — yes, in KU’s signature Trajan font — that stretch from ceiling to floor.

Across the room is a giant Jayhawk, to go along with her Jayhawk onesies, pants, tops, ribbons and everything else.

“From the day she was born, she’s had a Jayhawk on,” Howard said.

The proud parents say they’re looking forward to continuing to share their own love for KU with their children, as they grow up around Mount Oread and the athletic excellence that surrounds it.

And if they happen to have a third child in the months or years ahead, Urish is ready to add the name of another KU legend to their familial roster.

And he’s not hesitating to think big.

“If we have another kid,” he said, “it’s probably going to be Chamberlain.”

Man, am I proud to be the first poster on this one!

I am guessing ESPN will opt out of covering this best news item of late, but I'll keep my fingers crossed.

Why do you think ESPN should cover this? If you can give me a legitimate reason, I'll find a way to make it on the front page of ESPN.com.

I guess its a good thing that Danny last name was not "Moonbeam".

ESPN might cover it because it involves both sports. Both sports are currently nationally ranked and it's a good human interest story. What better story considering all the negative publicity lately.

So, now we know the origin of the scuffle. Reesing was whining ,as infants do. Manning told her to shut up, as big brothers do. Then Reesing, without the ability to form words, as football (sorry), infants do,as a response, took a big smelly crap in her diaper. Of course, Manning had been dissed and it was on! Manning's playmate, TT, came over and Reesing ended up head butting him on the thumb after he told her she was a poopie-head. And that's how it all started! See how things get so twisted in the media!

Eat your heart out Bedore.

(Nick Krug had photos, but they were removed due to inappropriate content.)

ESPN is not going to cover this. Sorry to burst your bubble.

Probably every major sports team has a similar story. Cute for local coverage, not ESPN.

Wow. :D No bubble burst, re-read the original message. Répéter s'il vous plaît: "..I am guessing ESPN will opt out of covering this..." 100 times. :D

Here is that link:

With all due respect, I am going to avoid the names Allen, Mason, Valesente, and Gottfried. Mason was a coin-toss, but he did leave for Georgia.....I mean Minnesota.

Allen, as in Terry, not Phog. Phog. Hmmmmmm. That has a nice ring to it. Does anyone have a son named Phog??

When I get married and have kids I'm naming my first Giddens...

I think these parents did a great job of naming their kids. Kuddos to them. This is a very nice story.

jayhawkinmullen: I hate to be the grammar police, but please look up the difference between "there" and "their". There are some of us who find it painful to read posts riddled with this error.

I'm sorry were these your children. I would hate to go there their the're though. Come on man this is not published work just stop.

On what planet is your little story remotely relevant?

I find your ridiculous choice of subject matter disturbing and revealing.

I suggest that you resist any future urges to post anything so offensive.

I named my kids Giles and Giddens.. It was a good idea at the time..

It's not relevant at all you are right, niether is this story. I was simply stating that people name kids what ever they want why make a story out of it. I'm not sure how it was offensive unless you feel the parents should have named the child Hitler in which case I find you offensive sir.

I hope Lew doesn't read this or he will sue the family for using the names and painting a Jayhawk on the wall.

How about a deal where Lew copyrights all proper nouns related to KU basketball and its players; then Lew licenses use of the names for a fee to KU fans wanting to name their children accordingly?

I think this could raise some money for KUAD.

So what happens if the kids grow up and want to go to Mizzou???

murph - a good point. But by then it may become a friendly rivalry.

If they would ever want to go to Mizzou, I'll bet their names will be legally changed by their parents. I'm guessing the new names would be something like Cletus and Emmy Lou. You know, something more appropriate.

yeah, right.."a friendly rivalry"! That will happen right after monkeys fly out of my butt!

How working class of you people. I bet you wear those sweatshirts with the foot tall lettering.

By the way, they are people, not pets. They'll want to kill you some day.

Pretty sure he was being sarcastic about ESPN covering this. Not sure if Reesing wants to see his name in big, pink letters but hey, maybe he does.