Lawrence Journal-World sports editor Tom Keegan sits down with former KU runner Jim Ryun, who has held the Kansas Relays record for the one-mile run for 42 years with a time of three minutes and 54 seconds. They discuss the mile and the potential of Ryun's record falling this year - all in 3:54. 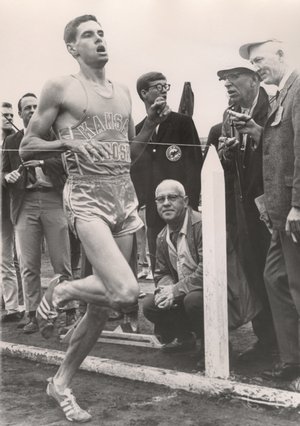 Former kansas runner jim ryun still holds the Kansas Relays record for the mile with a time of 3:54.7. Ryun will be on hand to watch the mile race Saturday.

Comedian Will Ferrell, over-actor Paul Giamatti and tattoo model Pamela Anderson weren’t yet famous when the Kansas Relays mile record that still stands was set by Jim Ryun. In fact, they all were in their mothers’ wombs.

With the help of the Kansas Turnpike Authority, Ryun ran a mile in 3:54.7 in the 1967 Kansas Relays.

At the age of 61, Ryun will serve as official starter at Saturday’s Glenn Cunningham Mile. He is scheduled to pull the trigger for the featured event of the meet at 12:55 p.m. Ryun lives with his family in Washington, D.C., has a ryunrunning.com Web site and also runs summer running camps at Gettysburg College and Colorado State University. He has been in town for the week promoting the Relays.

Alan Webb, who in 2001 broke Ryun’s high school mile record that had stood for 36 years and holds the American mile record with a time of 3:46.91, will have at least one KU graduate rooting for him to break the Kansas Relays record.

“Forty-two years is too long for a record to stand,” Ryun said. “I’m hoping he does a great job.”

Saturday’s forecast calls for on-and-off rain and temperatures in the 60s. Ryun, who twice set the world record in the mile and whose best time was 3:51.1, remembers well the conditions on the day he set the Kansas Relays mile record.

“I remember that it was rainy, which is typical for the Kansas Relays,” Ryun said. “That morning it was wet enough that coach (Bob) Timmons went out to the Kansas Turnpike and borrowed their asphalt dryers, their flame throwers, and had to dry the track out. In those days, it was a cinder track, and when you’re standing in water, you can’t run a fast time. But he got it fixed up great, and it turned out to be a great day. ... A few days later, the track was like brick because he had dried out all the moisture.”

During his competitive days, Ryun looked to be pouring everything he had into every stride, often looked to be struggling. Webb has a different style.

“I had a lot of head wobbling early on,” Ryun said. “Alan’s a very comfortable runner. He’s one of those guys you can watch. He’s a pretty runner in that sense.”

Ryun said he watched Webb break his high school mile record on television. He did it in the Prefontaine Classic in Eugene, Ore., clocking a 3:53.43 to break Ryun’s mark of 3:55.3.

“At that time, he’d been running well enough that I thought he would do it,” Ryun said. “He’s gone on since then and run well. He’s made the Olympic team. He’s set some American records. He’s got a very bright future. He’s a very young (26) runner. He still has a chance to mature and get faster.”

Ryun said one reason he would like to see Webb break his 42-year-old mark is that it would help revive the Kansas Relays because the mile is an event with which most can identify, particularly locally, given KU’s history of accomplished milers.

Asked if he could select a few Kansas milers to compete against in their primes in one race, Ryun cooperated.

“One of them, of course, would be Glenn Cunningham,” Ryun said. “His story to me is inspirational. As a child, being burned, and having to learn to walk, and he eventually was able to run and became the only silver medalist besides me from Kansas at the distance of 1,500 meters. Wes Santee, an incredible competitor, a guy you knew would take the race out and push hard. Bill Dotson, a guy who was our first sub-four-minute miler at Kansas, 1964. He helped me with a lot in training. He came in on the late-evening runs and helped out.”

How, Ryun was asked, would he go about trying to beat that field?

“The strategy, I guess, would be just to hang on to those guys,” said Ryun, who would have the best pure speed of the field. “They’re all tough competitors, very fine runners, knew how to set a blistering pace, and they were mentally tough enough they would punish you along the way. If you were going to win, they wanted to make you pay the price. It would be a very exciting race. Who would win would be anybody’s guess. It’s the kind of race, as an athlete, you’d want to participate in. You’d like to test yourself against those really great runners to see what you could do, and the outcome would be anybody’s guess.”

Anyone else notice "Nanny" Duver in the photo?

Yeah. I noticed Nanny. He was my football coach at Central Junior High.

Who was Jim running for in the picture? The name under Kansas doesn't appear to be Jayhawks.

Also, extra props to Jim for the record, since it was on a cinder track. Not nearly as fast as today's synthetics.

60's and moisture in the air is what coach use to tell us was world record weather for the distance events. Maybe not as much for the others, but hopefully a great relays none the less.

The name on Ryun's singlet would be "Kansas Frosh". He was an inspiration to me in high school, at KU and beyond...

But I'll give TK the benefit of the doubt.