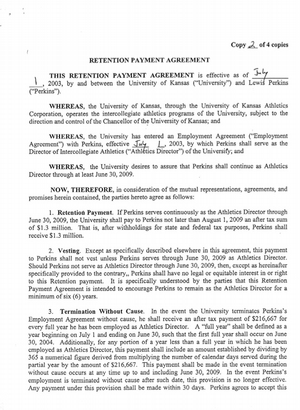 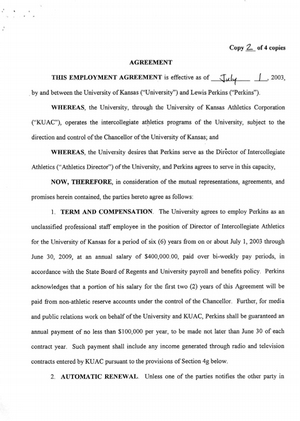 Kansas University’s athletics director could be in line for $750,000 more this summer than originally planned in his contract.

KU added the amount to a retention payment due to Lew Perkins this summer after he declined efforts made by another university in June 2006 to recruit him as its athletic director, said Lynn Bretz, a KU spokeswoman.

That university had notified both KU and Perkins that it was interested in recruiting him away, Bretz said Tuesday.

Perkins will earn the payment if he remains with KU through June 30 of this year. The money would be payable by Aug. 1.

The bonus rewards Perkins for remaining with KU for six years, and is being paid with nonstate funds from Kansas Athletics.

Bretz said the action to increase the amount of the payment came at the recommendation of Chancellor Robert Hemenway and was not triggered by any specific clause in the original contract.

Neither the university nor Kansas Athletics officials would identify the university that recruited Perkins. But in June 2006, Perkins confirmed he was contacted by University of Iowa officials about the athletic director’s job there.

Perkins, an Iowa graduate, said at the time: “Obviously, the University of Iowa is dear to my heart. I evaluated it. I took emotions out of it. This is where I want to be.”

The original clause in Perkins’ contract was included as a reflection of the university’s desire that he remain as athletic director for at least six years, Bretz said.

I say pay the man!

Pay it. He and the rest of the Athletic Dept. are worth every penny they are being paid.

I second jross' comments in addition to baseball now being nationally ranked. All other sports seem to be be doing well.

He's made us 750k several times over! Pay him his share and let him continue printing money for KU...

I just wonder what kind of debt the department will be in when he's gone.

Is that all Lew makes? All kidding aside... you could probably pay him much more and it would still be worth it. He has taken the program to new heights during his tenure while KSU has been stuck in the mud and also should have invested when times were better. I like to think of Lew as the "Warren Buffett" of college basketball because he struck while the iron was hot and it continues to burn at a scorching level.

I remember when Lew was dumping college football at WSU and making several enemies during that time. Mention his name around anyone in their 60's and they will give you a piece of their mind. Charles Koch has more money than any donor at KU last time I checked but he isn't loosening the purse strings enough to reconsider football because they don't have anyone with a reputation like Lew selling their alumni base. I hope he continues to work for KU for several years but I will understand when he decides to retire.

I have spent so much money on Adidas gear, Final Four tickets, floor seats at AFH, bowl games, etc. and I feel like I've gotten my money's worth each and every time. It's good to be a Jayhawk fan and I give him the majority of the credit. I would also like to thank Drue Jennings for bringing Self to KU and I am very happy to have Mangino as well. Could it get any better? Sure could but I will never forget these past few years no matter what happens in the future.

Thanks for everything Lew!

we gotta keep this guy.

The University is laying off workers.....

Lew's yearly take is around 900 grand, give or take some.

Where have you been? Since January I have been looking for your well thought, accurate posts. In my book you are well respected. And on this subject I agree with your post.

As depressing it is sometimes to hear about the big wigs getting another huge bonus as the average joe is laid off, Lew is worth every penny of the raise in what he brings back to our athletics department. Hopefully he's gonna be here for many more retention bonuses.

Is is possible for anyone to be more angry and bitter than Ryan Greene?

KU Athletics is more profitable than ever before and Ryan makes up crap about debt? With that kind of integrity, it's a miracle Ryan is able to get a job anywhere. Clearly, he will write anything he can to stab anyone in the back that he can.

Thanks for sticking around Lew. Let's win a few more championships!

Lew has done so much for the University athletic dept. and I agree, pay the man! what we pay him is significantly less then what he has brought!

5Decade, KU Athletics is not profitable at all.

It makes a lot of money, but it spends every bit of it.

To clarify my point for 5DecadeHawk, who doesn't know as much as he thinks he does:

"KU Athletics generated about $53 million in revenue for the 2007-2008 school year, according to the department’s annual report. But Marchiony said expenses are near the $53 million mark as well."

Greene's point is, once Lew Perkins hangs it up, the revenue is going to go down for a number of reasons, one being that Lew is good at what he does. What's going to happen to the expenses, especially those Lew mortgaged?

5DecadeHawk: i nominate arthur schopenhauer (1788-1860) as possibly more angry and bitter than ryan greene (or almost anyone else for that matter). i've reproduced below a few quotations from our heroically depressed friend for your consideration:

--"A man must swallow a toad every morning to be sure of not meeting with anything more disgusting in the day ahead."

--“Life swings like a pendulum backward and forward between pain and boredom.”

--“To marry is to halve your rights and double your duties.”

--"That human life must be some kind of mistake is sufficiently proved by the simple observation that man is a compound of needs which are hard to satisfy; that their satisfaction achieves nothing but a painless condition in which he is only given over to boredom; and that boredom is a direct proof that existence is in itself valueless, for boredom is nothing other than the sensation of the emptiness of existence."

--"Console yourself by remembering that the world doesn't deserve your affection."

as far as i can tell, lew has done a fantastic job at KU. admittedly, i'm by far most emotionally invested in the men's basketball and football programs and i don't really keep up with the other programs (so i don't have a holistic perspective), but those two programs anyway have performed phenomenally. i assume stability in the athletic department is part of what keeps coach self and coach mangino happy at KU, and i'm all for doing what it takes to keep those two guys around...

In the business world, it's all about "return on investment". Lew is worth every penny.

Congratulations Lew! Keep up the good work. We appreciate you and your continual striving for excellence!

... wins men's conference title in a "down" year, has two super stars returning, likely the pre-season #1

... played in WNIT title game, set all-time conference attendance record, lost only one starter, has a player who can dunk

When these four programs get to firing on all cylinders, the potential revenue and impact on facilities and recruiting will be absolutely mind boggling!