A jury trial has been scheduled in the civil lawsuit filed against KU basketball player Sherron Collins. 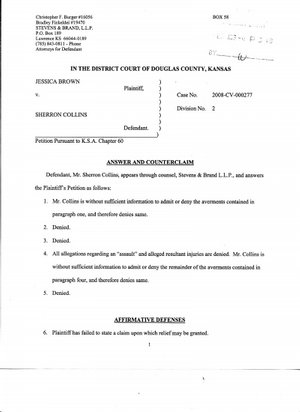 A civil lawsuit against Kansas University basketball player Sherron Collins is scheduled to be heard by a Douglas County jury on April 15.

Jessica Brown filed the lawsuit against Collins, in reference to an incident reported to have occurred at the Jayhawker Towers on the Kansas University campus.

In the lawsuit, Brown accused Collins of exposing himself and rubbing against her despite being told repeatedly to stop. She said the incident occurred May 18, 2007, in an elevator at Jayhawker Towers, where she worked. She seeks damages in excess of $75,000 for mental and physical problems.

Collins, a KU junior point guard, denies the allegations that he assaulted the woman. In a counterclaim filed last week, Collins seeks monetary damages from Brown accusing her of defamation and extreme and outrageous conduct. Collins maintains that Brown's allegations are false and made with the intention to make the public think less of him.

On Aug. 1, a judge set aside a default judgment he had previously issued when Collins did not respond to the lawsuit filed in May. An attorney for Collins filed a response to the lawsuit Aug. 4. On Monday, a district court judge scheduled the jury trial.

He has bad knees so he'll have to continue taking the elevator. Maybe the team can assign an escort for him.

Whoopie! Perfect date...now we can get through the entire season with out this distraction being discussed again.

WilburNether, Distraction - The diversion of attention of an individual or group from the chosen object of attention onto the source of distraction.Accusations true or false, IT IS A DISTRACTION. Source: http://en.wikipedia.org/wiki/DistractionEnough of this politically correct bull$hit already. Fact is, it could take attention away from the season, or worse, Mr. Collins future. It may have an affect on his state of mind which could lead to a less then acceptable season. AKA, DISCTRACTION.I'm not saying anything negative against the women making the claim nor in favor of Sherron. But you need to understand that it is in fact a distraction. So if your trying to be "Politically Correct", well then, by the deff of the encyclopedia, in all terms, it is a distraction. Keep your "Jock" itch and name calling to yourself. Kufan, RckChalkJeff, Carry on gentlemen

Lawyers and judges opting for this kind of delay appear to create another problem. The new problem seems likely to be that MANY are going to speculate ad nauseum about a likely negative outcome in the Collins assault case.Choices of deferring an undesirable event are often driven by the expectation of a negative outcome; that will be the speculation.Ad nauseum through out the season. The biggest selling souvenir this season in other arenas may be a Collins Assault T.Frankly, the powers that be may have just made the worst choice they could have made for all concerned, except the souvenir venders.Does KUAD get a cut of those sales, or something?

If they'd have done it sooner..maybe we could have gotten it out of the way and not had the distraction for Sherron all season.

Sounds like Wilbur had someone rub their crank on him at some point in his life. Get over it.

Hey WilburNether...Get over it and go back to studying in your scholarship hall ! ! !

I wonder how she plans on proving any of this. Any "DNA evidence (AHEM)" would have long ago disappeared, I would think. And since they were in an elevator, wouldn't it just be his word versus hers? Pretty sure one person's version of a story doesn't convict anyone, let alone someone with Collins' abilities (yes, of course he'll be treated special). If I were him, I'd say that I always take the stairs for conditioning purposes and then mention that I've been having issues with a stalker that tries to dress and act like me on campus.

Somebody, please, just make sure he SHOWS UP!!!

I hope none of it is true. He seems like a good guy, and I'd hate to think that there's any validity to her allegation.

jcsmith,It is disgusting that you and people of your ilk are more concerned about the effect of a serious manner on the level of concentration of a basketball team. Too bad you weren't out on the road in front of the drunk-driving jock Carmelo Anthony. I'm sure you would not mind if your death were dismissed as a "distraction," and we wouldn't want the Nuggest to be "distracted," now would we.As I said, that attitude is absolutely disgusting, and you just proved my case.

Sherron must be an okay guy, or he'd be a locker room problem. That said, not too many things pop out of inner Chicago like a daffodil in spring. I'm not making excuses for him, but can you imagine the culture shock of going from Crane Tech Prep on the West Side, to Lawrence?This may help to understand.http://outside.in/places/crane-technical-prep-high-school-chicagoAll things considered, I think Sherron has acclimated with amazing composure. I'd like to see WilburNether try a couple years at Crane without a hand gun and a bodyguard.Here's hoping that Sherron finds some temporary solace from all this by focusing on his game and his health.

The man got drunk and made a mistake. He is not a horrible person, he shouldn't be punished more because he is an icon. The man made a mistake just like all of you have done. Get over it. I've seen far worse and haven't had "Major Mental and Emotional Stress" because of it. Where's my 75K? I'll just be glad when this is all over with and we can show the world how good we will be this coming season. Rock Chalk!!!