Kansas University basketball coach Bill Self just had to put Sasha on the spot Monday at Self's basketball camp in Horejsi Center.

It wasn't the 6-foot-11, 245-pound Sasha Kaun from Tomsk, Russia, that all the campers were gawking at. Instead, it was a 5-4, 100-pound camper with the same name, albeit a slightly different spelling - Sasha Kahn.

The coincidences don't end with the names.

Kahn, a 12-year-old Leawood resident, was born in Slyudyanka, Russia, a city located in Irkutsk Oblast in southeastern Siberia - 827 miles from Tomsk.

"Isn't that unbelievable? He spells his K-A-H-N," Self said of the camper who attends The Barstow School in Kansas City, Mo. "He has the same name, same nickname Sasha and comes from Russia."

It wasn't a situation where Kahn tracked down Self to boast about having the same name as one of the KU players.

"When I was taking pictures with coach Self he said he recognized my name (from a name tag)," said Kahn, a first-time participant at Self's camp.

"It's a Russian diminutive of Alexander," said Kahn, whose first name is Alexander - just like the KU post player.

The two Sashas had actually met a few weeks back when Kaun worked Jeff Boschee's basketball camp in Kansas City at which Kahn was a camper.

"What are the odds of that happening? It's pretty cool," KU pivot Kaun said. "My deal is a little different because I was grown in Russia then came here and he grew up here." 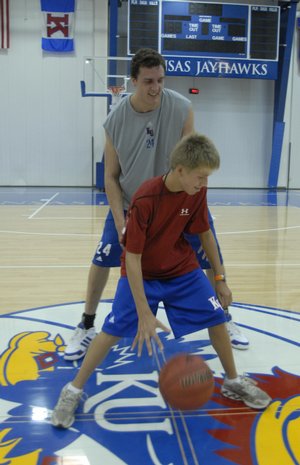 Kansas University player Sasha Kaun takes a turn guarding his namesake, Sasha Kahn, during the Bill Self basketball camp. The two Russia natives squared off Monday at the Horejsi Center.

That "little difference" includes the fact Kahn was an orphan in Russia before being adopted at the age of 3, moving to the United States and subsequently given the last name of his adoptive father: Kahn.

It was through his father watching Jayhawk basketball games on the television that turned the younger Kahn into a huge Kansas fan - and an even bigger Sasha Kaun fan.

"I didn't know until I was in, like, fifth grade, and that's when he came to the team and that's when I knew about him and everybody at school was shocked," said Kahn, who is planning to return to Russia this summer to see the sights of Moscow.

The 7th-grader-to-be at Barstow wasn't the only one of the two Russians having to deal with classmates in regards to the similarity in names.

"I told some of the guys and they (KU teammates) wouldn't believe me at first and I said, 'Go ask him what his name is' and stuff," Kaun said. "They'd come back and be like 'No, that's got to be a joke or something.'"

But why wouldn't they still be skeptical of Kaun?

After all, he's laid back to the point that he's even letting his hair grow out this summer.

"It's nothing. I'm just too lazy to get a haircut. It's the summertime, so I'm just letting it go for a little bit," Kaun reported.

Fortunately for Kaun, his teammates were present when Self informed the campers of the special similarity between the player and the participant.

"We didn't believe it until we saw the nametag 'Sasha Kahn,'" Sherron Collins said. "But some of us still didn't believe him because we thought Sasha just put a name tag on him and put the name on it. Until coach really said it was his real name we started believing him."

And what was their reaction when they did start believing their teammate?

Bill Self's usual roster of 14 jumps up to about 800 this week for Bill Self's Summer Camp.

¢ Self attended Game One: Self, who is good friends with San Antonio Spurs general manager R.C. Buford, watched the Spurs defeat Cleveland, 85-76, in Game One of the NBA Finals last Thursday in San Antonio.

"I think they look pretty good," Self said of the Spurs. "I do believe Cleveland will win one or two back home. The way the Spurs are playing, I don't think they (Cavs) will be able to play with them in San Antonio at all."

¢ McDonald in town: Phillip McDonald, a 6-5 senior-to-be from Cypress Springs High in Cypress, Texas, is on an unofficial recruiting trip to KU with his dad.

McDonald, who is Rivals.com's No. 75-ranked player, also is considering Oklahoma, Oklahoma State, Florida State, Texas A&M, Texas and others.

McDonald told Rivals.com he is "still wide open and plan to take some more visits."

KU: Birthplace of the Russian Revolution of Round-ball.

Self maintaining that Chicago connection that he worked so well at Illinois. Good to see. Lots of talent comes out of that city every year. (Garnett, DWade, Michael Finley, Ju Wright, Sherron, Dee Brown, etc)

Actually Jaron doesn't, because he has a bad reputation so they didn't hire him.

I forgot Madeline Kahn... damn, that would've opened the door for a Frankenstein reference too!

I think it's interesting that young Sasha goes to the Barstow school... Boschee and B Rush's brother coach highschool b-ball there...