Keegan: Kansas’ Stuckey has it all

The 330 best and brightest NCAA athletes are invited to the organization's five-day leadership conference in late May in Orlando, Fla. Talk for five minutes to Darrell Stuckey, starting safety for the Kansas University football team, and it's easy to see why he was chosen.

Smart, funny, outgoing, mature, confident, team-oriented. Stuckey has the whole package. On second thought, there is one thing he doesn't quite have a handle on.

An all-state center fielder as a junior at Washington High in Kansas City, Kan., Stuckey proved during Sunday's annual spring intrasquad game at Memorial Stadium just how much more difficult it is to field punts than catch fly balls.

"Can't say I didn't give him a chance," Mangino said with a smile. "One of them missed his body. (Assistant coach) Earle Mosley said, 'I don't mind you missing a punt, but you're at least supposed to make contact.' As long as he does a good job back there at safety, we'll take it."

Last fall, during his red-shirt freshman season, Stuckey started the final four games, missing five games due to an ankle fracture. He looked just fine returning an interception 37 yards for a touchdown for the Blue in a 48-0 washing of the White.

Stuckey studies communications at Kansas, and communicating is what he does best. To use a word he loves saying, Stuckey would be "phenomenal" in the broadcast booth. 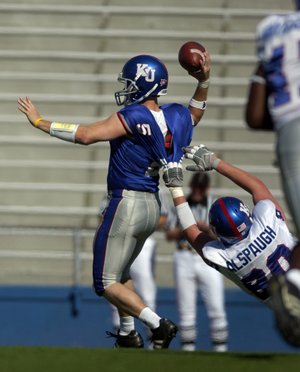 Asked about receiver Marcus Henry, the star of the game with 150 receiving yards and three touchdowns, Stuckey said: "It doesn't surprise me at all because he's phenomenal, and his work ethic is very consistent. I've just been waiting for us to call more plays for him. I think the reason there haven't been more plays for him is because he's so quiet. He's not one of those guys who's always saying, 'I'm open. Give me the ball. Give me the ball.' He's so quiet his nickname is Mute. ... Mute's the exact opposite of Terrell Owens."

Stuckey is neither quiet like Henry nor obnoxious like Owens. Making plays from his safety position is Stuckey's second-best skill. Making his mother, Michelle Foulks, proud is his best.

"She loves everything my sister and I do," Stuckey said. "My sister's quite an athlete."

A healthy full season from Stuckey, the addition of junior-college transfer Kendrick Harper at cornerback and an improved pass rush should keep Kansas from having a repeat of 2006, when the Jayhawks' pass defense ranked last in the nation.

He might never be given the chance to get better at fielding punts. Maybe it's just not his thing.

It is good to see kids like Stucky succeed. My wife teaches at Washington High in KC and said the Stuckys were some of the nicest kids and had supportive parents. Another former Washington HIgh grad about 4 years earlier who did well was Ivan Harrison. Like Darrel, he was on the small side so I never thought either of them would play at the Div I level, let alone excel. Both did. Ivan was one of the leading ball carriers for a couple of years with the Wyoming Cowboys.

I taught at Washington and was the head coach there for 4 years before moving to Texas. Stucky started games for me as a freshman when Ivan Harrison was a senior. Ivan went for 400+ rushing yards against F.L. Schlage in a game during the 2001 season and Stucky was his full-back. I have watched both of them play college football games. It is great to see two young men from the Wyco area make it big and do it with quiet class!