"I was like, 'Great win.' They were like, 'No, YOU won,'" Bowman exclaimed after catching 13 passes for a school- and Big 12-record 300 yards and four touchdowns.

The 6-foot-4, 220-pound junior receiver from Chattanooga, Tenn., who sat out last season after transferring from the University of North Carolina, surpassed his previous personal best of seven catches for 166 yards against Houston earlier this season.

His 300-yard total was the 11th-best performance in NCAA history and the top effort against a KU defense.

"My cell (phone) is on the bus. I have to go check it. I might have a call from my mom,'" said Bowman, who once had 308 receiving yards in a game in high school.

"It's like a dream come true. This happens like, what, once a year for a guy? I'm glad to be the one it happened to." 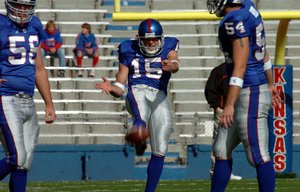 Bowman scored two touchdowns in the third quarter - on receptions of 54 and 25 yards from quarterback Bobby Reid. He had two more in the fourth, on strikes of 55 and 64 yards.

"I just told him, 'Keep it goin', baby.' He kept it goin,'" Bowman said of sophomore Reid, whose 411 passing yards (completing 23-of-35 with five TDs) were the second-most in a game in OSU history. Current head coach Mike Gundy passed for 429 yards against KU in 1989.

Reid's 457 yards of total offense are most by a player in OSU history. The previous mark was 434 yards by Gundy in that game against KU.

"I didn't know he did that. That stinks," Gundy cracked. "If I knew that, I wouldn't have called the last pass play."

Reid's powerful 29-yard rush for a score in the third quarter, the one that followed a successful onside kick, cut KU's 17-0 halftime lead to 17-14.

Kerry Meier plays his first game after sitting out three in a row due to an arm injury, but he is not the story today. KU lost to Oklahoma State 42-32.

"Once we got in the end zone the first time, things started opening up wider for me," Reid said.

"D'Juan (Woods) did a good job blocking downfield for him," Reid said of Woods, who had three catches for 42 yards and a score. "Things started going in his (Bowman's) favor. I was happy to be part of it."

Bowman reported that KU didn't use the "cover 2" OSU had expected to see Saturday. He indicated the blocking of his fellow receivers downfield "kind of gave me extra juice."

Of Bowman's effort, Gundy said: "He is fast. He has the ability to use his body to bounce off people and has great balance. I'd say he has a chance to be national player of the week."

OSU, which snapped a seven-game road losing streak in the Big 12, surged offensively following a decision by Gundy to try an onside kick that was recovered by kicker Jason Ricks after the Cowboys' first score - Bowman's 54-yard reception with 8:19 left in the third.

"We needed a little lift there," Gundy said. "We'd made a nice play and scored. You have to take chances to make your team believe you have a chance to win games. It's why we go for it sometimes on fourth down, too."

The Cowboys finished with 603 yards of offense, 300 going to Bowman, who made it look easy.

He's ready to check out his performance at film session on Monday.

Interesting that KU came out in pass coverage that OSU did not expect. Give the track meet results, the Defenseive Coordinator needs to reassess the talent or lack of talent inKU's deep secondary.