Bowl eligibility and a second victory in 14 years against in-state rival Kansas State made for a sweet Saturday evening for Kansas University fans.

"Look at K-State all season long. Take away the Texas game, they are just as equal as KU is. Now if you watch this game, why is it a surprise that KU won? Not a surprise," said Brett Neighbor, a 2004 KU graduate from Overland Park.

Neighbor and Dusty Buell, a 2003 KU graduate from Norman, Okla., teased their friend, a K-State fan, on Campanile Hill just as groups of KU students carried the prized set of goal posts toward Potter Lake.

"KU could easily have one loss right now. They lost so many close games," Buell said. "Take away Toledo, Nebraska, Oklahoma State, all of the games KU blew, but this is a rivalry game, totally different story."

The Jayhawks won their sixth game of the season, 39-20 in the Sunflower Showdown. In the midst of successful seasons for both teams for the first time in many years, Memorial Stadium was filled with a record crowd of 51,821 fans.

Before the game, Lawrence was filled with fans from both teams as heavy traffic congested the streets.

"It was definitely the most intense game I've been to this season. It was so much fun," said Emily Davis, a KU freshman from St. Louis.

Some were hoping the excitement would mark a new competitive era in the showdown.

"What I really hope is that it kind of brings it back, gets it going good again because I think that's a lot of fun to have that in-state rivalry," said Brian Buller, a 2004 K-State graduate from Wichita.

After booming the Rock Chalk Chant through the stadium in the final minutes, members of the Jayhawk student section rushed the field and eventually wrestled both goal posts to the ground.

For the first time this season - but the fourth in the last two years - the students carried the pieces of the posts up the hill and dumped them into Potter Lake to complete the ritual. They also recited a less-than-flattering chant directed at K-State. 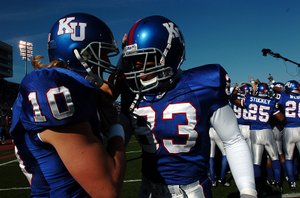 "It was a big deal. Especially since they beat Texas last week," said Kate Williams, a KU freshman from St. Louis.

While KU fans enjoyed bringing down Wildcat fans after their emotional victory last week, some K-State fans didn't think the victory was worth sacrificing the goal posts.

"I just don't understand. Maybe if it was a ranked team, but we are 7-5, and we're still not that good," said Gabe DeForest, a K-State junior from Hiawatha.

But KU fans were glad to see their team on top again and to have a year's worth of football bragging rights.

"I was excited for the bowl eligibility after this big win," said Steve Fritz, a 1996 KU graduate from Olathe.

Who cares what K-State thinks?

yea sure, its been so long since ku should feel like that so its gonna be hard for the students to get that mindset. me personally, as someone who has helped tear down many goalposts, find it very fun stormin the field after the game!

The goal posts came down because the students were starving for something to celebrate. It has more to do with KU winning bowl eligibility and doing it over their fiercest rival. Would they have done it against Iowa State or Baylor? Nope.

Did anyone see Ohio State fans pour onto the field after the Michigan game? Police surrounded both goal posts. Otherwise, I'm sure they would have come down too. Did State fans expect to win? Surely.

If a team with as many losses as Kansas qualifies for a bowl game, that is clear evidence that there are just way too many bowl games. There shouldn't be more than a dozen teams who get to play bowls. Let's face it; KU's season was a let down and not deserving of a bowl game.

There are a ton of bowl games....just because a team is eligible for one doesn't deserve the field to be rushed.

What I didn't read in this article is how the people who rushed the field got booed by their own fans. I was sitting with a friend in the K-State section (I was about the only KU fan over there) and the K-State fans were not the ones who booed them.

There was no reason to rush the field at all, it just shows that if a win that trivial is worth the field being rushed then the KU football program is still pathetic.

On the bright side, congrats to the KU team for beating KState.

I'm 51 and I have a job, a mortgage and a kid. Given my demographics I should be of the opinion that tearing down goalposts is immature and lacking in class and sportsmanship. My only question to those who think the goalposts should stay in place is, what the f@#$ is wrong with kids today? You're not students for long so take this opportunity to get drunk and act stupid. I think it's a great tradition and I hope to see it more often.

How are you suppose to "expect" to beat a team that you have a 1-12 record over the last thirteen years and that team just beat the #4 team in the nation?

Nice win Hawks. Enjoy every minute of rubbing the win in the Wildcats faces. That's what it is all about.

I hate that goalpost crap. Why Potter's Lake? They can only carry them that far, yet they think they are cool for it? Why not just throw them on the ground, or parade them around the streets and then take them full circle back to the stadium to celebrate all over again? That would be impressive, but throwing them in an adjacent pond is embarrassingly stupid.

When we had chemicals leak into Potter's a few years ago, I saw giant turtles that had dragged themselves out of the poisoned water before they died on the bank. I was astonished that there were such creatures living below the surface while herons and hawks grazed above.

I don't understand how you can have any KU spirit and not have any respect for that environment. Football fans, OK, but what are you doing in college??

I didn't think mob mentality was usually so lazy.

How does throwing a goalpost into a heavily contaminated stormwater detention pond constitute lack of resepect for the environment? I'm afraid, Ms. Hadley, that you are picking the wrong battle here. Potters Lake isn't a pristine water body by any stretch of the imagination and throwing some aluminum goal posts in it isn't exactly going to cause further harm to the ecology of the area. It collects stormwater runoff from adjacent parking areas - the chemicals that you are referring to came from a blown transformer behind Strong about 7 years ago. it entered the pond through stormwater conveyances with outfalls as the southern end of the "lake." Those PCBs and lead and whatever other nasties that got in there did result in some kills of amphibians and what not. It is unfortunate but not wholly unexpected. That "lake" gets antifreeze, gasonline, brake dust, oil, trash, and all kinds of other unpleasants running into it after every storm event. It's a dirty, dirty thing.

Let the kids have their fun. They are students supporting their university and celebrating an emphatic victory over a team that has dominated us in the past decade. Instead of worrying about the respect the students have for the environment, perhaps you should be worrying about the respect the students have for their own bodies. That water is foul and if they happened to have any sort of open wound (paper cut, blister, etc.) I would bet there's a 95% chance that puppy is getting all infected. Plus, any water you might swallow... nasty.

It's good that you respect the environment, but it's time that you start to accept certain realities. Work on protecting pristine, healthy areas. Dont' focus so much on the ways that can't be saved. You'll be a lot happier that way.