Yet thanks to more peaks than valleys, the Jayhawks were able to whip UMKC, 66-53, on Thursday night in Allen Fieldhouse.

The Jayhawks were dynamite during the last 81â2 minutes of the first half in holding the Kangaroos scoreless and cruising to a 30-16 lead at the break.

KU's lead grew to as many as 18 early in the second half, but there was no cruise control for this freshman-filled squad. The Jayhawks' bulge shrank to five with about six minutes left before freshman Kelly Kohn scored nine straight points to provide a desperately needed boost.

"Until Kelly gets that run," Henrickson said, "we were going the wrong way fast."

Kohn, a 5-foot-9 guard from Adrian, Mich., wound up as the Jayhawks' leading scorer with 13 points. She also contributed four assists and three steals.

Until Kohn went on that scoring spree - it lasted a little more than 100 seconds on the clock - she really hadn't done much on offense, but something clicked.

"When you get in the moment of the game," Kohn said, "there comes a time when you have to put your foot down, and we had a sense of urgency."

Henrickson was, of course, delighted Kohn stepped up.

Meanwhile, soph guard Ivana Catic didn't have any spectacular moments, but she came off the bench to provide some stability, logging 31 minutes with nine points, five assists and four steals. 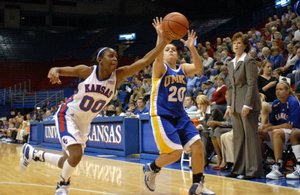 A starter most of last season, Catic has been used strictly in a reserve role during the first three games.

"If I can't start, I might as well play hard when I get in," Catic said. "I wasn't surprised. I didn't really have a good week of practice."

Danielle McCray, another freshman, also came off the bench to score 10 points in just 12 minutes on the floor.

Nine players scored as Kansas bounced back from a disappointing loss to Iowa last Sunday in the championship game of the WBCA Classic in Kansas City, Mo.

"I'm OK with a lot of people scoring," Henrickson said. "That's good for us because we don't really have anyone to go to right now. But that's right now."

The Jayhawks forced 25 turnovers - nearly half of them steals - and shot a respectable 41.5 percent. After bricking 12 of 13 three-point attempts against Iowa, the Jayhawks made 4-of-9 threes Thursday night.

That outside accuracy enabled KU to overcome an sub-par night by center Marija Zinic who had averaged 15.5 points in the Jayhawks' first two games.

"I was disappointed with her lack of poise," Henrickson said of the 6-2 sophomore from Serbia.

Zinic missed nine of 12 shots inside, and many of them were blocked by Alysa Klein, the 'Roos' 6-3 junior center. Klein finished with 16 points, 13 rebounds and 7 blocks. Zinic had 8 points, 6 boards and zero blocks.

Kansas (2-1) will travel Monday to Omaha, Neb., to meet Creighton. The next home game is Nov. 29 against Western Illinois.