Before Wednesday night, Marchello Vealy made only one three-point shot in his entire career.

"I guess I just felt like every time I caught it, I shot it," Vealy said. "Caleb (Green) and coach (Scott Sutton) kept telling me to shoot. I just stepped up and made some jump shots."

Actually, seven to be exact. Vealy silenced an uneasy Kansas crowd with a 7-for-8 shooting clinic from beyond the arc. If that wasn't enough, the Oklahoma City native drilled five threes in a 31â2-minute span in the first half to extend ORU's lead to 10. Vealy's 22-point performance even surprised some of his teammates.

"I knew we had a lot of guys, but Marchello Vealy?" senior forward Caleb Green asked. "No one knew he was going to come in here and shoot like that tonight. He put us over the top tonight."

The KU defense routinely double-teamed Green, freeing up an open Vealy, who could have sat in a lawn chair for one of his threes from the left wing in the first half.

"I'm sure the rim looked like a big ocean to him," Sutton said of Vealy. "Believe me, he'll continue to play more and more minutes for us." 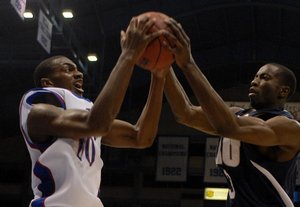 "I've never experienced anything like that in my life," Green said. "There were 16,000 people here that didn't believe we could do it. This is probably going to be the best victory of my life - so far."

Green's personality also shined onto Naismith Court. He joked with ORU bench players from the court and smiled after at least half of his baskets. He left the KU faithful scratching their heads when he held the finish of his shooting rotation after making a three-point basket in the second half.

Green laughed when asked about it and said he wasn't looking at anyone in particular on his way back down the floor.

"I don't usually make a lot of threes, so when I hit a three, it's like, 'Wow,' you know what I mean?," Green said. "This is one of the top three atmospheres to come and play in. You can't come into an environment scared. You have to enjoy every bit of it because you won't ever get another chance like this."

Green said the atmosphere of the fieldhouse initially made him nervous - until he took the floor.

"I've played in front of a lot of big crowds, but I've never seen anything like this," Green said. "It was shocking at one point. But at the end of the day, it's a basketball game. Everyone has to put their shoes on the same way."

To think that Oral Roberts, which plays in the Mid-

Sutton obviously had his team prepared from the opening tip. Oral Roberts jumped to a 17-16 lead with 8:53 remaining in the first half and never trailed the rest of the game. Sutton showed nothing but respect for the Jayhawks following the upset victory.

"I have a feeling this will motivate these guys," Sutton said of Kansas. "It wouldn't shock me one bit if they go on and get to the Final Four and win a National Championship. I think they're that talented. I thought they were the most talented team I've faced in my 12 years of coaching."

When was the last time a KU player (on this team) stepped up with a big game against a better opponent! This is a problem with talent when it can not "kick it" into another gear when it is absolutely necessary.

Why is it that there always seems to be a nobody nothing team with a player that no one has heard of that just so happens to come into some Zen moment against KU? Who was that little nobody guy from St.Joseph's last season? 11 million threes? Last night, Vealy. Really? Come on! What gives?

These teams need to get buried by a team of KU's caliber. Until they can take care of the squads they're supposed to, I'm not too optimistic about the rest of the season.

I know that last night was no more a true indication of this KU team's effort than was the game against Northern Arizona. However, they really need to work on some consistency... and I don't mean consistently letting the 'nobody' beat you.

Get the job done.

that would be Chet Stakitas, or however you spell his last name.

They knew their post defense was terrible, so they double teamed the post.. Leaving a wide open perimeter player..Not good... Rush can get on a roll but we need Chalmers or Robinson to be the go to guy... They finally got it about three minutes left in the game that they needed to take the ball to hoop but by then it was too late... Can't wait till we get Kaun back, just for the extra fouls he'll add and maybe he'll be able to alter a few shots..... We are very young and it showed last night... Good luck Hawks...

yeah.. i'm not going to worry about last night too much.. did you see Green.. it seemed like he was just throwing it up and everything was going in..and 7-8 from 3 point land man i agree w/ Jayceph .....someone does this to us every year.... well at least twice a year.. once against St. Joe.. and then that Summerville kid from Bradley too..

This is a good eye opener for the young hawks though.. makes me think of when we played Texas last year and Aldridge went for 9-10 or something like that...and we bounced back stronger