In the know with ‘Zo

They're all about snowboarding, iPods and the newest edition of Grand Theft Auto.

If it happened more than five years - or five minutes - ago, it might as well have not happened at all.

So when Mill Valley High boys basketball coach Justin Bogart introduced his new assistant before the start of the 2004-05 season, it shouldn't come as a big surprise that the Jaguar pupils weren't starstruck.

Alonzo Jamison? Never heard of him.

"The kids in our program were infants when he was playing for KU. They really don't have any idea of that era of KU basketball," said Bogart, who was a student on Mount Oread while Jamison was busy helping the Jayhawks to the 1991 NCAA title game against Duke.

"I don't know if they were that impressed until they saw a highlight film of him. Then their eyes were wide-open."

Funny how a 6-foot-6 forward with quick hands, nimble feet and a penchant for timely low-post production can alter an attention span.

That inaugural film session has given way to a 2-year-old relationship that has Jamison honing his new hardwood craft while young, impressionable players moving through the Mill Valley program try to build on helpful hints offered by a mentor who learned at the knee of one of college basketball's most successful coaches. 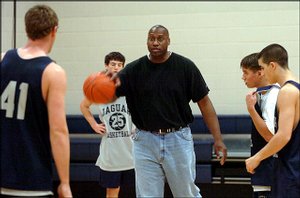 "I felt I needed to get back," said Jamison, who after his three-year career at KU was drafted by the Sioux Falls (S.D.) Skyforce of the Continental Basketball Assn. and played overseas in Sweden and France before retiring in 1995. "I feel I have a lot of knowledge that I need to give back to the next generation of players.

"It's a sport I love, honestly. It's a way to give back for the students who want to learn from me."

Jamison's marriage to Mill Valley came about while he worked in sales for Jerry's Sports Shop in Grandview, Mo. Jamison called on the school, still in its infant stages, and found a willing customer.

"We hit it off pretty immediately," said Bogart, now in his sixth season at the Jaguars' helm. "We had some money to spend, so obviously he was happy about that."

When Bogart was looking for a new assistant prior to the 2004-05 season, and no one at the school was willing to commit, his wife suggested he ask Jamison.

"I invited him in to talk about it, and he agreed," Bogart said.

Not that Jamison needed any arm twisting.

"I came through to see if I could do anything with him. I just wanted to see if I could get my feet wet in the coaching field," said Jamison, reflecting on his initial visits to the Mill Valley campus. "The next year, this came about, and I jumped at the chance."

By both Bogart's and Jamison's account, the latter's first year on the sidelines focused on finding comfort in this newest chapter of his basketball life.

This winter has seen Jamison take a more active role in guiding a junior varsity program that owns a 15-3 record while also helping fine-tune a varsity squad that is 17-1, ranked in the Kansas Basketball Coaches Assn. Class 5A poll and likely to earn a No. 1 seed entering next week's sub-state tournament at Topeka Highland Park.

"He's a tremendous asset to our program. ... I'm still exploring all the potential he has to give us," said Bogart, who singled out Jamison's ability to connect with players as one of his biggest strengths.

"No matter what they think of him as a college player, he has fostered a respect with them, and they have in return. That's critical to effective coaching."

A big reason is Jamison's ability to not dwell on his KU and pro careers.

"He never mentions it at all," said Andrew Wendorff, a Mill Valley junior who splits time between the varsity and junior varsity teams. "He doesn't want any of that. If people didn't say anything, you would never know."

"We brought in a poster one time that said 'The O-Zone,'" added junior Ted Novak, "and he got real embarrassed."

Then again, there are times when Jamison's pedigree has undeniable benefits.

"He always gives us tips on what he learned from Roy Williams," Novak said. "That's obviously legit."

While Jamison has nothing but good things to say about Bogart and his disciplined basketball culture, he admits there are moments when he envisions himself calling the shots of his own program.

"I'm enjoying what I'm doing right now, and I'm learning a lot," Jamison said. "That's what I wanted to do - learn how to run a top-notch program and go from there.

"Who knows what the future may bring?"