What got into the Wildcats during K-State's back-to-back wins over ranked teams? 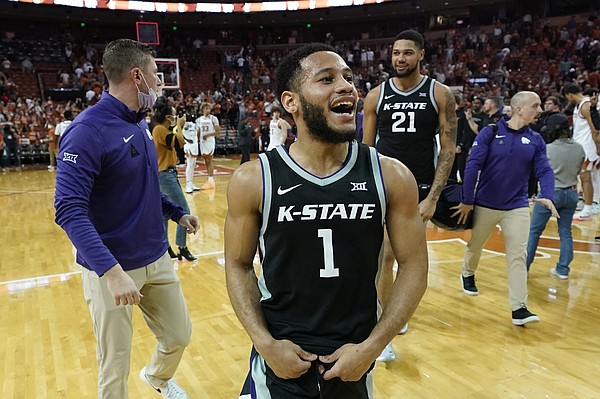 Two weeks ago, a game against Kansas State — at home or on the road — looked like it would be one of those rare off nights in the Big 12 Conference, where a B effort would probably get a win.

Today, it looks like the 7th-ranked Jayhawks will need to bring their A-game to Manhattan with them this weekend to leave with a victory.

The Wildcats are just 10-7 overall and still sit at 2-4 in Big 12 play. But it’s those two conference wins that get your attention.

First of all, they came in K-State’s two most recent outings. Second of all, they were both over ranked teams — at home against Texas Tech last Saturday and on the road over No. 23 Texas on Tuesday night.

After opening conference play with four straight losses — two at home and two on the road — something clicked for the Wildcats, oddly enough, in the immediate aftermath of a complete meltdown in a 60-57 loss to TCU.

Perhaps that was it. Maybe Bruce Weber’s club needed to hit that full meltdown mode — rock bottom, if you will — to get upset and start playing better basketball. Now, a fan base that seems mostly ready to move on from Weber must confront the reality that if they root for him like crazy on Saturday to be the hated Jayhawks, it might actually go a long way toward Weber sticking around well into the future. Tough times.

Before we worry about what becomes of Bruceketball in Manhattan, let’s take a quick look at what went right for the Wildcats in their upset wins over the Red Raiders and Longhorns.

That 66-65 win over Texas on Tuesday came just two weeks after the Wildcats lost to Texas at home by double digits.

The Texas Tech win was even crazier. Not only had the Red Raiders just knocked off Kansas and Baylor in recent games, but the Wildcats absolutely controlled that game from start to finish.

Here are a couple of the common factors present in both games that KU figures to be very aware of heading into Saturday.

• Defense. Go figure. In a league made up of defensive stalwarts, the Wildcats have been pretty solid in that area of late. They limited Texas Tech to 39.6% shooting (including 23.5% from 3-point range) and forced the Red Raiders into 18 turnovers. A few nights later, KSU kept Texas to 42.6% shooting from the floor and the exact same 23.5% 3-point clip, giving up just four 3-point makes in 17 tries to both teams. That’s a big one. 43% shooting overall isn’t necessarily guaranteed to get you beat. But if you don’t make more than four 3-pointers, and yet keep shooting them, that’s going to make things tough. Texas only turned it over 11 times, was out-rebounded by just one (32-31) and got to the free throw line 26 times, making 21. Those are all good enough numbers to win a game. But K-State never let the Longhorns get comfortable or get into what they wanted to run. That’s been a problem for Texas throughout Chris Beard’s first season in Austin, and K-State made them pay for it the second time around. In the first meeting, two weeks earlier, was only slightly better from 3-point range (7-for-23 for 30.4%) but outrebounded the Wildcats 40-28. K-State currently ranks 5th in the country in 3-point defense.

• More defense. In that Texas Tech win, the Wildcats limited TTU to just 0.77 points per possession, well below Tech’s season average and good enough to nearly keep Tech from even getting to 50 points. K-State scored at a clip of .94 points per possession in that one, with Nigel Pack and Mark Smith both having efficient days on offense. In the Texas win, though, the ’Cats were only marginally better in that category (1.10 to 1.08) but still found a way to keep the game in the low 60s. Fewer possessions equaled fewer points for Texas in that game. The 65 points the Longhorns scored was just a half dozen below their season average, but K-State’s 66 points was nearly a dozen more than the Longhorns had typically surrendered. So it wasn’t just about K-State’s defense playing well. It also was about Texas’ defense being less stingy than it had been. Why? Could it be that the Longhorns took the Wildcats lightly after holding them to 57 points just two weeks earlier? Neither KU nor K-State figures to take the other lightly on Saturday, but that could be an explanation in at least one of K-State’s non-rivalry wins.

• K-State’s backcourt is one of the smallest in the country, but Pack (6-foot) and Arkansas Little Rock transfer Markquis Nowell (5-8) are both scrappy tough. And they’re not afraid to defend bigger guards — which they very well may have to do against Kansas — or littler, quicker guards like Dajuan Harris Jr. and Remy Martin. That will be one of the interesting matchups in Saturday’s game. And given the way Self has looked to post up both Ochai Agbaji and Christian Braun at times this season, seeing how these two guards handle that if and when it’s thrown at them could be a big factor both ways. K-State has, at times, played super small lineups, with the tallest player at 6-foot-4. They did that a lot late in the recent win over Texas and it won’t surprise anyone if they show that look to KU, too.

• COVID-19 is everywhere right now and just about every program in the country has had it affect them in one way or another. But it’s worth remembering here because K-State’s COVID issues, which included taking Weber away from the team for a period of time, may have factored into their 0-4 start in conference play. After all, three of those first four losses were by a single possession — two points to OU and three points to both West Virginia and TCU. If that 0-4 mark had been 1-3 or 2-2, it might not have been such a shock that K-State pulled off back to back wins over ranked teams. From the sound of things, the whole team was back together again against Texas Tech and that in and of itself may have given this team a boost in confidence. After all, per KenPom.com, the Wildcats currently rank 55th in the country and are a top-25 defense.

• While K-State played well in both games, there were other factors in play. Texas Tech, for instance, was playing its fifth game in 10 days, and both head coach Mark Adams and TTU guard Bryson Williams admitted to being tired and fatigued both going into and during the loss to the Wildcats. Both also said K-State was the better team that day and deserved to win, so it wasn’t like they were making excuses. Weber has said that one of the biggest factors in their recent turnaround is that these guys figured out for themselves what it takes to compete in this league. It starts with defense, of course, and that, Weber said, gives you a chance. But that’s just on game day. There’s so much more that goes into it — from practice habits, accountability, preparation and more — that players just have to get for it to matter. Weber said he believes his group is a player-driven team right now, and he’ll take that every day over a coach-driven team, because player-driven teams typically have heart. It matters to them. Instead of a coach telling you why you have to do something or why it’s important to play hard, the players feel that themselves because they’re angry, upset and disappointed when they’re not doing it.

Ah, the best time of year for KState fans... they've wanted Weber gone for years, but yet he always seems to manage a few big wins, has some youth and promise on the roster but underwhelms in the postseason, and the administration decides to keep him around because they're really close to getting over the hump.

There is no worse place to be in sports than average. An average team, coach, PG, QB, etc. will do enough not to let you be horrible and blow it all up, but not enough to be good and win anything of consequence.

Bruce is a good coach and the best thing for KU BB. Hope they keep winning the non-KU games.

Looks like they got a good transfer QB as well. Many Huskers are glad they did.

The Tech game was the first game all year where State had their full team healthy. That is the difference. I follow KU first but also follow State and WSU. They have been just so close and Covid and injuries have keep them from being 4-2 instead of 2-4. We (KU) cannot overlook these guys.

KU sometimes looks remarkably bad and turns it over carelessly. The Hawks were ahead of the Sooners 42-30 but suddenly trailed after OU went on a 20-2 run. That is crazy.