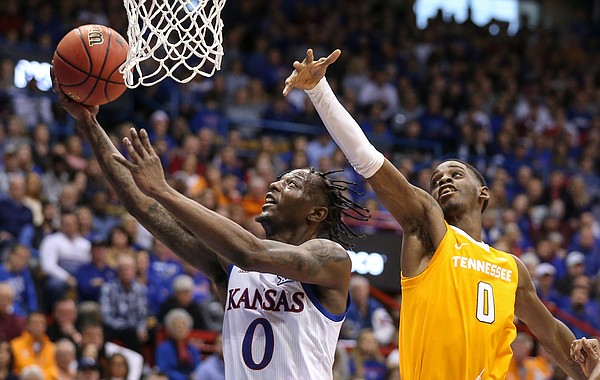 The Kansas men’s basketball team is losing two All-Americans this offseason, but ESPN.com’s John Gasaway still believes the Jayhawks will have one of the best players in college basketball next season.

Gone are Udoka Azubuike and Devon Dotson, heading to the NBA to see how and where they fit at the game’s highest level.

In to replace them is senior-to-be Marcus Garrett, a versatile, do-everything guard from Dallas who dominated on both ends during high school and is poised to play the biggest role of his KU career next season.

Gasaway lists Garrett as the fourth-best player in all of college basketball heading into the 2020-21 season, which puts Garrett in some pretty elite company.

Of KU’s most recent first-team All-Americans, only Devonte’ Graham appeared on any preseason All-American teams. And even Graham was voted one of college basketball’s top five players by just three outlets (USA Today, CBS Sports and NBC Sports) heading into the 2017-18 season.

The year before that, it was Josh Jackson, not Frank Mason III, who received preseason All-American votes heading into the 2016-17 season. All Mason did was win unanimous player of the year honors six months later.

And a couple of years earlier, freshman phenom Andrew Wiggins was named to all but one of the major preseason All-American teams, but Wiggins, despite having a better season than he gets credit for, wound up a consensus second-team All-American by season’s end.

Azubuike and Dotson earned that same distinction after KU’s most recent season, and those two were ranked No. 8 (Azubuike) and No. 12 (Dotson) by The Associated Press in the 2019-20 preseason All-American voting.

At the time he wrote it, Gasaway was still waiting to hear whether some of the top players in college basketball would return to school or turn pro.

Nearly all of them have since decided to enter their names into the NBA draft pool for 2020, paving the way for Garrett to enter his senior season as a preseason All-American.

Not surprisingly, Gasaway is basing his ranking on Garrett’s reputation as one of the nation’s best defenders.

“Your national defensive player of the year has a knack for blowing up whatever play the opposing offense thinks it’s about to execute,” Gasaway wrote. “Indeed, you can make a case that Garrett is one of the best collegiate defensive players under 6-foot-6 since Marcus Smart.”

But Gasaway is at least aware that the potential exists for Garrett to be a much better offensive player than he has shown throughout his first three seasons with the Jayhawks.

So much of it will come down to his ability to knock in shots from the outside. But Garrett’s a smart enough player — and always has been — to take what’s there and work to position himself for the scoring opportunities that best fit his game.

“The version of Garrett that showed up to drain six 3-pointers and score 24 points against Oklahoma in February is arguably the best player in the country,” Gasaway noted. “In larger sample sizes, however, (Garrett) is a career 58% shooter at the (free-throw) line who connects 28% of the time from beyond the arc.”

With more of the scoring load on his shoulders and the title of “senior” next to his name, it’s not hard to envision Garrett leading the Jayhawks in scoring next season. However, if he doesn’t, that could be a great sign for the overall health of KU’s offense.

It’s still May and there’s a long way to go and a lot to learn before we know exactly what the 2020-21 Jayhawks will look like.

But here’s my early attempt at ranking KU’s 13 scholarship players, from most talented down, based on what I’ve heard and seen from them thus far.

1 – Marcus Garrett: The most experienced, most versatile and most talented player on the roster, Garrett will continue to fill up the stat sheet and could be poised for a monster season.

2 – Tyon Grant-Foster: All you need to know about Grant-Foster is that KU coach Bill Self, at one point this season, said the juco transfer would’ve played major minutes for the 2019-20 Jayhawks. Great length, athleticism and a knack for scoring in a variety of ways, he’s well equipped to make an immediate impact.

3 – Ochai Agbaji: Don’t forget, even as inconsistent as Agbaji was as a sophomore, Self rarely took him off the floor. That’s because he trusted him and because Agbaji played and tried so hard at all times. Give him another offseason to expand his offensive game and a more established role as an upperclassman and it’s easy to see a big jump for the local kid.

4 – Christian Braun: Speaking of local kids, Braun’s got my vote (at least right now) for breakout player of the 2020-21 season. Last season he got just enough of a real taste of what playing at Kansas is all about to immediately pick up where he left off next season. Where he left off was as a dangerous and versatile scorer capable of playing many roles and styles who competes as hard as anyone on the floor each time out.

5 – David McCormack: The opportunity is there for McCormack to be a double-double monster. And if he adds some more polish to his game, he’ll have a good shot at making this ranking look ridiculous by season’s end.

6 – Dajuan Harris: This is your next fan favorite, ladies and gentlemen. You’ve no doubt heard plenty about Harris’ potential, but wait until you see him play. Team-first all the way, with smooth skills and a pest’s mentality on defense, KU fans are going to absolutely love this point guard for the next four years.

7 – Mitch Lightfoot: Speaking of team-first, Lightfoot’s return to action is going to be a lot of fun to watch. Remember, this was a guy willing to lay it all on the line on any given night while knowing he still had a couple of years left in his career. Imagine how hard he’ll play when he knows this is it. Add to that the fact that he expanded his offensive game during his redshirt season and steps right in as the team’s best shot blocker, and there’s no reason to be shy about predicting a strong year for the senior forward.

8 – Bryce Thompson: Thompson’s a five-star talent who is getting better by the week and he will play a key role on this team. But he’ll still be a freshman and it could take him a little while to get fully comfortable. If it doesn’t, he’s going to be lights out. But if it does, that’s OK. He projects way more as a two- or three-year player than he does a one-and-done, and that’s good news for Kansas.

9 – Tristan Enaruna: If he could develop more of a killer instinct, I’d toss Enaruna into the top five without hesitation. Many NBA scouts who watched the Jayhawks last season paid close attention to Enaruna while they were in the building and his blend of size, length, skill and athleticism make him a player packed with potential.

10 – Jalen Wilson: Wilson, you’ll remember, was the highest-rated player in KU’s 2019 class. So the potential is certainly there. But it remains to be seen what the injury did to his game and confidence. And it’s also worth watching how far behind he is after being limited and seeing next to no court time as a true freshman.

11 – Silvio De Sousa: After a strong finish to his freshman season, it’s been a rough couple of years for De Sousa. He hasn’t given up, and the coaches haven’t quit on him. But his success during his senior season will be entirely dependent on him finding a role to fill and then going after it with tenacity.

12 – Gethro Muscadin: There’s a lot to like about the freshman big man, but it’s hard to picture him having a huge role right away, particularly if KU plays a lot of four-guard lineups as is expected.

13 – Latrell Jossell: The freshman point guard figures to be a deep reserve next season and may not have a clear path to playing time. But he can shoot it and he’ll contribute in one way or another, most likely as a terrific scout team guard in practice.

I love Garrett and will be interesting to see how he plays this year without Dok and Dotson. He was able to get to the rim with surrounding talent, but who are we going to rely on for points this year? I'm predicting this team will be one of the lowest scoring teams we've had in the BS tenure. If we can play good defense, that will win us a lot of games, but I can't imagine this roster putting up consistent numbers in the 70s or beyond

I believe Garrett will have more room to work with in the lane without Dok. I'm going to assume that McCormack and Lightfoot will be our main bigs, throughout the year, with De Sousa playing reserve minutes in a pinch.

Last year teams knew that when Dok was further than 5 feet from the basket he wasn't going to shoot, so they could sag off him and help on defense. This year, teams will not be able to sag off McCormack or Lightfoot at any time. Both can score up to 18 feet consistently, and at times will shoot the 3. I think that alone will open up the lane for more penetration from Garrett. On top of that, if Braun and Agbaji shoot the 3 at a better percentage this year, and Thompson, Grant-Foster, Enaruna and Wilson can be a threat from 3, we should see more open lanes and more kick outs to open shooters as teams will not be able to help off those guys.

Teams had plenty to worry about when Dok was 5+’ from the basket last year because it undoubtedly meant that he was setting a massive screen and was fully capable of rolling to the basket with a full head of steam.

It does sound like there will be more perimeter options this year. It will be interesting to see how the wings in particular pan out. So many options and sounds like several fit into the combo guard style that Coach loves.