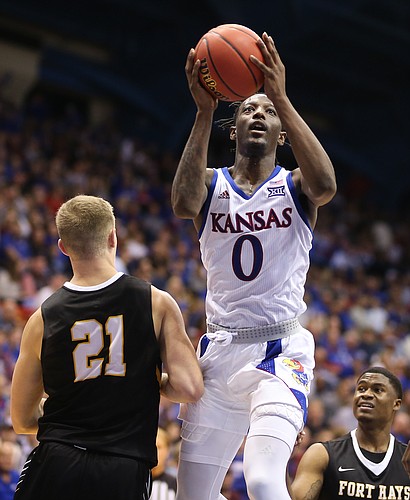 Kansas guard Marcus Garrett (0) floats in for a bucket over Fort Hays State forward Jared Vitztum (21) during the second half, Thursday, Oct. 24, 2019 at Allen Fieldhouse. by Nick Krug

Kansas junior Marcus Garrett is expected to slide back into his regular role during tonight’s exhibition finale against Pittsburg State at Allen Fieldhouse, but his time at point guard last week gave his head coach something to think about.

“Looking back now, I wish I’d maybe done it different in the past (and made) him our backup point,” Self said this week. “He’s probably more of a point than I’ve given him credit for the last couple years. I do think we’re seeing that he can actually run a ball club.”

While that might not matter much for this year’s Jayhawks with sophomore Devon Dotson entrenched as one of the top point guards in the country, Garrett’s ability to fill in at the lead guard spot does provide Kansas with the luxury of a little security at the game’s most important position.

“He ran the show,” Self said of Garrett’s five-assist-zero-turnover game against Fort Hays State last week. “He’s a good point guard. I do wish I’d have played him more on the ball last year. And it still remains to be seen how much he will this year because we may have to play him some at the 4, too. You know, he can play the 4, he can be whatever, but when the point guard’s not in the game, the ball’s got to be in Marcus’ hands because he’s good with the ball.”

Garrett, who played with the ball in his hands throughout his high school career at Skyline High in Dallas, also impressed Self in other areas last week. He hit four of seven shots from 3-point range, continued to be the defensive menace that he has been throughout his KU career and looked cool, calm and collected while doing all of it.

“I think Marcus Garrett’s improved,” Self said. “I don’t want to jinx anything, and one game doesn’t mean anything, especially because it doesn’t count, but he looks like a different player to me because his confidence level is so much higher.”

Self said this week that Garrett was probably as versatile of a player as KU has had in the past 17 seasons and added that his ability to play multiple styles and spots should benefit more than just Garrett.

“I think Devon will really benefit from having an additional ball handler in the game who can make plays off the bounce,” Self said.

Those moments when Garrett can attack will present themselves more often if he can continue to knock in shots from the outside.

A career 26% 3-point shooter who has worked tirelessly to recreate his shot during each of the past two offseasons, Garrett looked supremely confident and comfortable in his 3-point attempts last week against Fort Hays State.

And Self said that was merely a glimpse of what the junior guard has shown in practice.

“I think his confidence level (is so high) and the numbers each day show that he’s a much improved shooter, when you look at the statistical numbers now compared to what he did in drills last year and stuff like that,” Self said. “I don’t think we need to base his play on if he makes shots, but what a bonus that will be if you have to guard him everywhere on the court.”

And 3 year guys too.

I hope that he has improved his sleep habits.