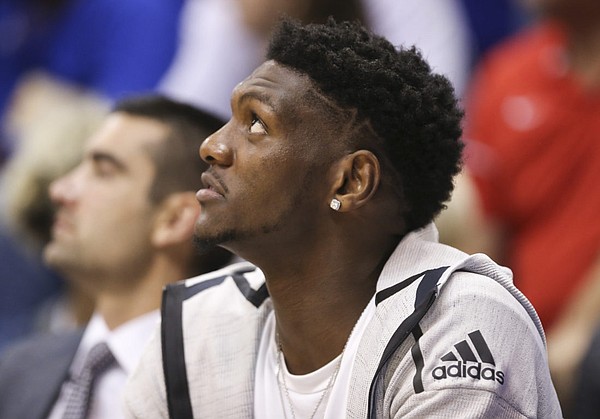 Kansas forward Silvio De Sousa (22) watches from the bench during the second half of an exhibition, Thursday, Oct. 25, 2018 at Allen Fieldhouse. by Nick Krug

Kansas basketball coach Bill Self, quiet on the issue since the end of the federal trial in late October, addressed the eligibility review surrounding sophomore forward Silvio De Sousa during his “Hawk Talk” radio show on Wednesday night.

Self’s comments came in response to questions about De Sousa, who remains held out of action while Kansas awaits word from the NCAA regarding his eligibility in the wake of the recent federal trial on corruption in college basketball and the alleged involvement of De Sousa’s guardian.

By “wheels are in motion,” Self no doubt was referencing the fact that the federal government recently gave the NCAA the all-clear signal to begin whatever investigations it deemed necessary.

Big 12 commissioner Bob Bowlsby told the Journal-World this week that he had not heard anything from anyone at the NCAA about an investigation into Kansas, and KU officials, as of last week, had not responded to inquiries about whether they had heard from the NCAA, either.

“If there's an update, I get an update, but there hasn’t been a lot of updates, and understandably so with the situation," Self said Wednesday. “So we know that it wasn't going to happen immediately. And so, now that we've gotten past immediately, now we're hoping it happens immediately now, since we've had a little bit of water under the bridge over time.”

What's in question, of course, is whether De Sousa should be ruled ineligible because of testimony in the trial that alleged that his guardian, Fenny Falmagne, received both a $60,000 payment from a Maryland booster to attend the Under Armour program and a $2,500 payment from an Adidas rep to enroll De Sousa in online classes so he could attend Kansas.

There also was plenty of talk in the trial — and before it — about an alleged agreement for the Adidas rep to pay Falmagne $20,000 to help him "get out from under" the Maryland money so De Sousa could go to Kansas. According to testimony at the trial, however, that payment was never made because news of the FBI investigation broke before any money changed hands.

All parties involved here have been rather quiet on what this all could mean for De Sousa, but there seem to be three options, at least as of today.

• De Sousa could be ruled ineligible and forced to sit out the entire season.

• De Sousa could be required to pay the $2,500 back and serve a shorter suspension, much like former Jayhawk Josh Selby back in 2010, when he received improper benefits worth an estimated $5,700 and sat out the first nine games of KU's 2010-11 season.

• De Sousa could spend the entire season wondering and waiting, much like former KU forward Billy Preston did a year ago, without any clear timeline of when a ruling might come.

Two of those three options could lead to a scenario where De Sousa would stick around and simply use the 2018-19 season as a redshirt year. But Self said Wednesday there had been no talk of anything like that at this point.

"I don't think that Silvio, my personal opinion, would be a guy that would be in college for five years with his talent level. So I don't know if that would be the case," he said. "I guess it is a possibility, but I don't think it's a realistic possibility, at least right now, unless there's some things that transpire differently than what we know to be as we speak right now."

Option Four...Silvio says "screw it"... goes to Europe to make some money then declare for the NBA draft. Highly unlikely but a legitimate possibility.

The red shirt scenario makes sense with Dok and probably Lawson leaving after this season but is a student being declared ineligible a one year deal or is it, as I suspect, permanent?

Silvio is not a guy who will make to graduation at KU because if his talents. If he somehow gets cleared to play this year, he needs to play this year because he's the key to KU being able to match up with Duke as neither Doke nor Dedric can match up with Zion. Silvio may not be able to stop Zion, but he's athletic and strong enough to hang with Zion and let Doke and Dedric deal with their other bigs.

You're right about option four, Tony.

And let's not forget option 5 (again unlikely but given the NCAA, who knows?): that KU has to forfeit the games from last year in which Silvio played, including the tournament games -- i.e., that the Final Four from last year disappears.

It's still early, but I think Silvio is a huge piece to a National Championship run. He is a rebounding machine. I personally think that he is our next best big guy after Dok. Lawson is very skilled, but is going to be a non factor against high pressure athletic guys as his athletic movements are too slow. If he gets cleared I think our core guys should be:

i think you're being way too harsh on Lawson over 1 bad game...and you're fooling yourself if Self would start DeSousa over Dedric if he got cleared..SD didnt show a whole lot offensive finesse....

Over simplified one aspect. There was some information that was already known by KU and the NCAA and he was cleared last year. However, some things were unknown. The things that are unknown will determine the punishment. For instance, if the $2500 was known and the NCAA cleared him because it was for educational purposes and there was proof of such. Than we are pending the alleged payments which if found to have been made, will likely end his amateurism. If the $60,000 was already known about and the NCAA cleared him because there was no evidence of the transaction, than unlikely that will be reviewed again. There are three alleged payments and each one presents separate issues. All three are still alleged as well, if any of them come to fruition, then the repercussions are completely different.

I think it is sloppy reporting to combine the $60,000 payment and the $2500 payment as like payments. The $60,000 payment is an alleged as hearsay. Neither party involved with that payment has ever mentioned or have testified. That payment was made as a comment about the situation. The $2500 payment was mentioned by the person that actually created the payment. Two very different situations lumped under one issue from this article. I think these are the situations that should be more carefully reviewed by LJW and has led to some incorrect assumptions by people reading these types of articles.

Ala Preston, same song n dance. Talking in circles on all of these eligibility issues has grown old, tiresome, and quite frankly an embarrassment to the KU establishment . Release the kid and let him get on with pro basketball life. College is the furthest thing from his mind right now.

What's your theory on why Sylvio chose to return to college for an entire year if "college is the furthest thing from his mind?"

if the NCAA really cares about kids then they will give KU and Silvio their decision much sooner than later..its not fair for him to waste time sitting on KU's bench waiting for a decision that might never come when he could be in Europe making money right now

College is the furthest thing from Silvio's mind only in the mind of a quitter who has no comprehension of the dedication of the players and coaches. To recognize their perseverance would be to recognize their own pathetic place.

Agreed. Silvio loves KU and we should reciprocate.