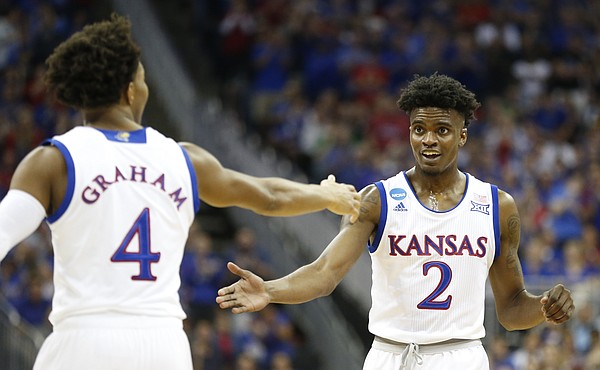 When Lagerald Vick first showed up on the KU campus, he was viewed as a solid pick-up but not a star, a player the Kansas basketball program would be happy to have in three or four years.

Well, Year 3 for Vick has arrived, and I think fans, teammates and coaches would agree that the appreciation for Vick surfaced long before now.

Regarded by Kansas coach Bill Self as the best on this year’s team at turning the corner and driving to the basket, Vick could — and probably should — play by far his biggest role since coming to Lawrence.

Add to that the fact that his confidence continues to grow by the day and you’re looking at a Jayhawk poised for a breakout season.

He Will: Start every game this season as long as he’s healthy

During the 2016-17 season, Vick made just six starts in 36 games. Most of them came early and one of them came when Josh Jackson was suspended during the Big 12 tournament.

Most of the non-Vick starts went to Svi Mykhailiuk and a lot of people believe that Mykhailiuk is poised to keep his starting spot for the 2017-18 season. So how, then, could Vick be in the starting lineup this season? There are two paths, either of which I believe is very possible.

Path 1: Vick starts alongside Svi and the Jayhawks, as they did a season ago, play small and fast with Devonte’ Graham, Malik Newman, Svi and Vick joining Udoka Azubuike in the starting lineup. This option was solidified — if not born — in Italy, where the Jayhawks used this lineup early and often, both with Azubuike on the floor and during the two games he missed due to illness.

Path 2: Vick supplants Svi as a starter and the two merely switch roles. In order for this to happen, either Billy Preston or Mitch Lightfoot is going to have to make a huge jump between now and the start of the season. Both are bigger bodies and good athletes who would fit naturally in that four position. But neither has the experience, explosiveness or scoring ability of Vick or Svi. If one of them makes the jump, though, and Self finds himself picking between Svi or Vick, I think he goes with the driving ability, length and superior defense of Vick and uses Svi for instant offense off the bench.

The smart money, however, says both start and both play a ton of minutes.

As mentioned above, Vick is likely the best player on this KU team at getting to the rim. He’s comfortable handling the ball, likes to turn the corner and is not shy when he gets into the paint.

Because of that, I think you’ll see him look to attack a lot more than he did a season ago, when Josh Jackson and Frank Mason III had the green light to go to the rim long before Vick.

Last season, 42 percent of Vick’s shot attempts (92 of 219) were 3-pointers and he hit 37 percent of those. Look for the number of shot attempts to go up, perhaps topping 300, but for the Memphis junior to fire up fewer 3-pointers than he did a season ago, when he benefitted greatly from waiting on the wing for Jackson or Mason to kick it out to him for open jumpers.

If Vick shoots 300 times this season — and, let’s face it, that’s entirely possible given the fact that the Jayhawks will be missing 821 shot attempts by Mason and Jackson and Newman and Graham can’t take them all — then I’d bet that 100 of them (33 percent) come from behind the 3-point line and the rest are transition buckets or drives to the rim.

He Might: Be one of the most underrated players in the country

At 6-foot-5, 175 pounds and bubbling with athleticism, Vick is the kind of athlete who many teams would love to have.

Add to that fact the reality that he actually has some pretty good skills — solid shooter, above-average defender, good handles — and you’re looking at a guy who can flat out play.

The Kansas coaches know that and many in the Big 12 know that, as well. But I’m not yet sure the rest of the country knows that.

Vick is not a focal point for most people and, therefore, he’s flying in the shadows a little bit. That kind of anonymity is a nice place to exceed expectations. And the real answer to this claim will come in the results. Can Vick continue to produce solid numbers and perhaps take his production to another level as a bigger part of the program with more eyes on him?

If the answer is yes, he won’t be underrated or overlooked for much longer.

I've been impressed with him since the Korea tournament. He really played well during those games and impressed me as much more than a freshman barely at KU.