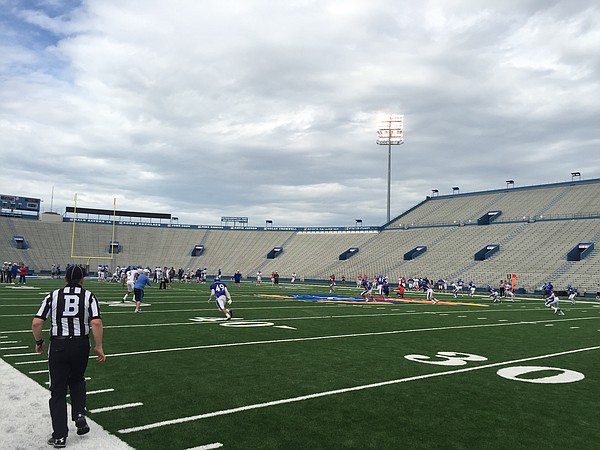 KU QB Montell Cozart looks to pass during Friday's 7-on-7 drills at spring practice No. 11. by Matt Tait

Friday's spring practice for the KU football team — No. 11 of 15 — kicked off with strength coach Je'Ney Jackson sending his guys back to the goal line after a lackluster breakdown that followed their warm-up.

“We're about to scrimmage, fellas,” Jackson and other coaches yelled. “Have some enthusiasm.”

Seconds later, the breakdown was much more spirited and the Jayhawks had that fire the coaches were looking for.

This, of course, is nothing new. Coaches do this all the time and it has happened at KU plenty. But regardless of whether it encourages you to roll your eyes or pump your fist, it definitely shows the kind of commitment to the small details that this coaching staff and these players are working toward.

Unfortunately, we weren't able to stay for the scrimmage but there were a few other things that caught my eye while we were out there. Here's a look:

• One special teams drill I hadn't seen yet was the onside kick recovery drill, which featured roughly 30 different guys running through the drill. One at a time, the guys would practice fielding the bouncing kick and then going down to the ground to secure it. Mixed results, as expected, but it was a fun drill to watch. About that attention to detail, special teams coach Gary Hyman got all over his kickers during the drill for not going rapid-fire enough. “This is their drill, not yours,” Hyman barked. “Get the kicks off faster.”

• Watched the O-Line again for a while and saw Zach Yenser calling out protections and then hovering over his guys while instructing them what to do. Most of them knew what to do to begin with, but he was creating stress and forcing them to focus while under fire. Bryan Peters was working at left tackle with the ones and twos and I can't help but think he's going to wind up being one of those Gavin Howard type guys this fall. He may not be the most impressive guy they have, physically, but he's reliable, can play multiple positions and has a good head.

• The Jayhawks will take the weekend off and return to the practice fields on Tuesday for practice No. 12. 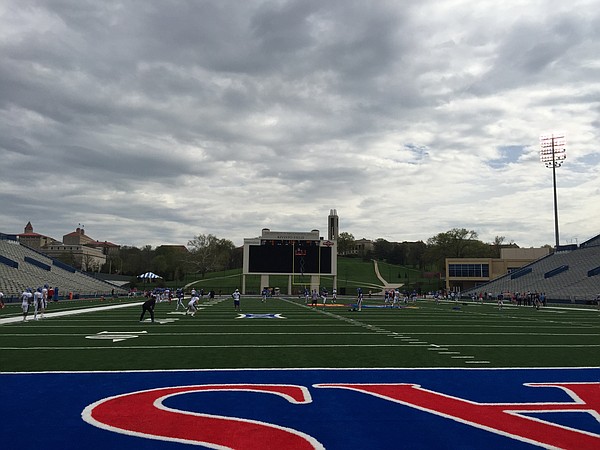 Matt, it's tough to comment on these updates, but don't think that they aren't appreciated. I look forward to them. They also will help us all a great deal in understanding some of the new systems being put in place.

Thanks, Brett. Not worried about comments. Just glad people are enjoying them and finding them useful. There'll be plenty of time for commenting when this team gets going for real. Thanks for the note, though. -- Matt

It's the first thing I look for when I come to the page.

Is TJ still playing QB, injured, or just sat out that QB drill?

Though I'm now noticing that Jordan has moved to TE.

If it's tempo they're looking for (and it is) it's crystal clear that Cummings is a full step ahead in terms of reading and reacting, or at least the numbers would indicate this is the case. (Cumulative time for 4 throws)

Montell is just slightly faster than the first walk-on, and maybe not necessarily better when including the fact that Seurer was slightly more consistent with the times.

It is good to perpetuate the notion of competition to keep Michael working as hard as possible, but my guess is one of the freshmen gives him the most competition from August to November.

(I miss that Newell geek.)

Why do you suppose you were asked to leave for 7 on 7 drill? I understand it is early. The spring game is touch. I am surprised they will keep their offense under wraps until first game. Interesting! !!

Not really trying to hide, just happened to occur after the designated time when the media is allows to observe practice.

I'm thinking nothing at these practices "just happens" to occur at a particular time.