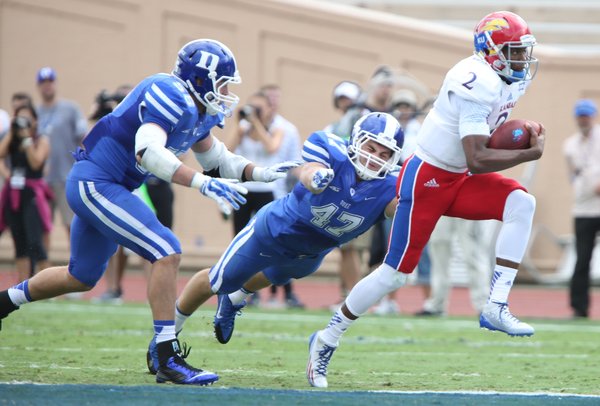 Kansas University sophomore quarterback Montell Cozart on Wednesday met with the media for the first time since his disappointing outing at Duke last weekend in which he completed 11 of 27 passes for 89 yards with two interceptions and no touchdowns in a 41-3 loss.

True to what we've learned Cozart to be, the young QB walked into the chancellor's lounge at the Anderson Family Football Complex just after 1:45 p.m. with a bounce in his step and a smile on his face.

If he's letting last week's outing get to him, he sure isn't showing it.

I asked Cozart the first question of the day, a simple one: "Montell, what have the past few days been like for you?"

But like a seasoned veteran who had been through the ups and downs of playing quarterback dozens of times before, Cozart respectfully put the answer to my question on hold and issued a statement to kick things off.

“Last week, we were disappointed in our performance and I was disappointed in my performance, as well," Cozart said. "Sunday, I came in and talked to Coach Weis and Coach Reagan and Coach Powlus and we addressed the issues. We have no excuses for them, so we're just trying to move past it, look forward to Central Michigan and get ready for this game plan.”

There was nothing phony about it. And I'm sure it helped Cozart to publicly say what he said and take some of the blame for the offense's dismal performance.

I asked the KU media reps if the statement was planned or staged and they said it was not, that it was all Cozart wanting to own up to his part in the meltdown in Durham, North Carolina.

It might not help him complete passes or find open receivers, but the gesture showed that (a) he's a quality young man and (b) he cares. A lesser person would've moved on, let the Duke game die in the past and answered any questions about it with a snarky "I'm not gonna talk about that game any more, it's over." Not Montell. Good for him.

As for my question, he did answer it as soon as he finished his statement.

“They've been pretty good," he said of the past few days. "It's what comes with being the quarterback. Any quarterback goes through it. Started off a little slow, but got off to a great start as practice started to progress and we feel great about things going forward.”

Just for good measure, and to truly emphasize that he's not planning on letting the Duke performance be the one he's remembered for, Cozart threw in one last comment before talking about this week's match-up with Central Michigan.

“I feel good. I feel like that doesn't define me as the quarterback or who I am. I'm just moving forward and not trying to dwell on last week.”

After spending 10 to 20 seconds laughing the way an older brother would about something his younger brother did that he was proud of, senior defensive lineman Keon Stowers said there was nothing about Cozart's decision to get his flop off his chest that surprised him.

“I've been telling people, man," Stowers said. "He is a mature guy. He accepts his responsibility. He comes to work. That doesn't surprise me at all with him. I liked his attitude yesterday and that was encouraging.”

Gotta love the kid. I hope he starts to grow into the role.

You said it, John. It's great to root for someone with that kind of attitude, and it would make it that much better if he becomes successful.

I'm seriously rooting for this kid. I think he just needs to get hit some more. Looks a little afraid to get knocked around by guys that are much bigger than him. If he can get that fear outta the way, I think he can make better decisions and have more confidence. Won't be perfect by any means, but he'll be better. And look at what Reesing did, he didn't care about getting hit. Of course he had a much better line and his foot work was insane, but I remember seeing him make a few guys look reaaaallly stupid and then he threw for a deep pass or completion.