All right. Now that we got past the Kansas University football players who didn't get into the action last year, let's take a quick look at what we should watch for from them and the guys who did.

Here's a glance at the top five story lines heading into spring drills, which begin one week from today, snow or no snow.

1. What's up with the quarterback position?
Here we are, three full seasons removed from Todd Reesing's final game as a Jayhawk and we're still searching for a suitable replacement. Jordan Webb, Quinn Mecham and Kale Pick all got their turns during 2010 and 2011, and Dayne Crist and Michael Cummings each had a crack in 2012. While those guys collectively had a couple of decent moments, none of them proved to be the answer or even anything close to it. So now the focus turns to Jake Heaps, the BYU transfer who sat out last season and appears to be the favorite to be the guy this year. Making a complete read on Heaps — good or bad — based on what he does this spring would be foolish, but it will at least be the first meaningful evaluation we get to make. 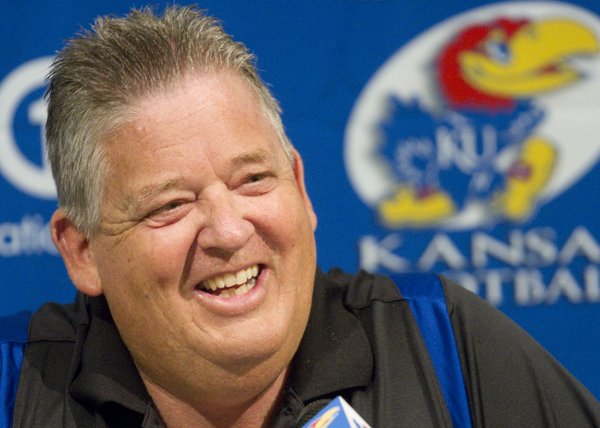 2. What role will familiarity play for the Jayhawks?
I asked KU coach Charlie Weis in December if Year 2 would more closely resemble Year 1.5 because of the crazy amount of turnover and long list of potential new starters on both sides of the ball, some of whom already are here and others who will arrive in June. His answer was a clear no, which led me to believe that he felt pretty good about what his players learned and retained from his first season in town. Coaching transitions are never easy and the second year is almost always better and smoother than the first. The players know what to expect both in terms of coaching style and schemes and the coaches benefit from a having a full year of relationships with their new guys under their belts. 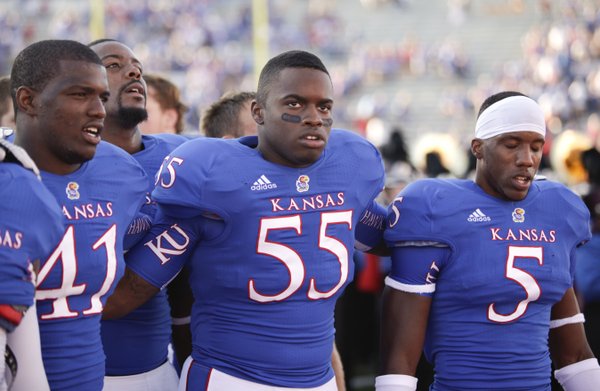 3. Which player becomes “the next big thing?”
Each spring, somebody steps to the forefront and becomes the hot name on offense, defense or both. Last spring, it was Michael Reynolds, who was a monster in the spring game but parlayed that into only minimal success during the season. The year before it was Christian Matthews, who, despite stacking back-to-back solid spring games on top of each other, made next to no impact as a receiver (though he did play a key role as a Wildcat QB). So who will be the guy (or guys) that step up this spring? Always fun to watch, awfully tough to predict. 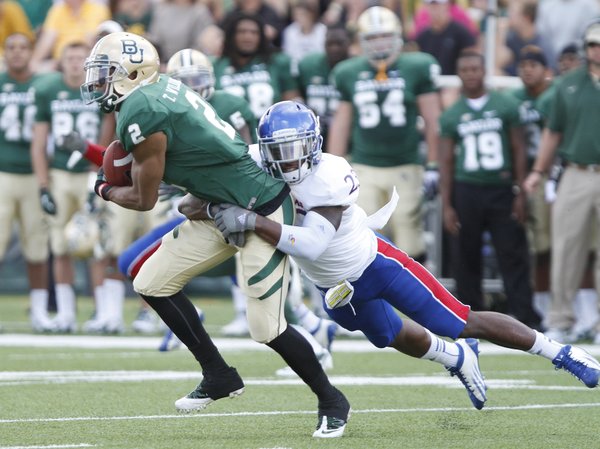 4. Roster/position changes?
It happens just about every year and we've already heard about one move — incoming freshman Colin Spencer will start at RB instead of DB — but Weis promised that more moves are on the way. In fact, the word he used to describe how many tweaks had taken place was “several.” My best guess is that means all kinds of things — a few guys have left the program, others have changed positions and others may even be looking into new roles while playing the same position. The only clue he gave us was that nobody had jumped from offense to defense or defense to offense. I'm sure this topic will be among the first things he addresses at his pre-spring news conference next Monday, but even after that it will be interesting to see how the changes impact the program and develop throughout the spring.

A quick look at the most updated roster revealed the following changes: 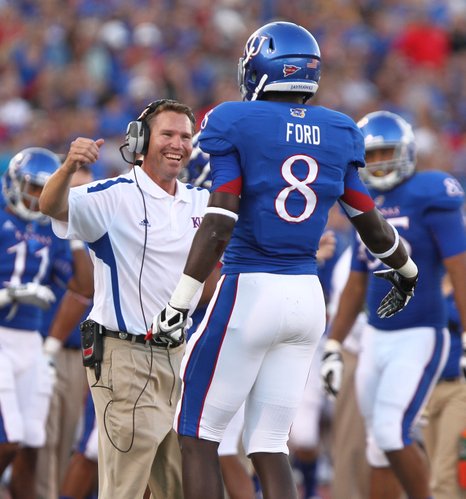 5. Will the coaching shuffle have any impact?
Linebackers coach DeMontie Cross left for TCU this offseason and stepping in to replace him is longtime Jayhawk Clint Bowen. Bowen knows his stuff and, more importantly, he knows the players. So it seems safe to conclude that the loss of Cross will not hurt the defense much at all. Beyond that, though, there are a handful of other new faces in new places throughout the coaching staff and it'll be interesting to see how quickly those guys can settle in and earn the respect of the players. Many of them are familiar faces simply shuffled into new roles, so that will help. But spring is where it will start.

I have my own storylines....

O-line who will step up to fill the voids on the left side, and will the right side improve.

WR- who is going to step up, JM may be legit, but he wasnt starting at oklahoma, so still an unknown.

D-Line- will we be as good as advertised

Wideout is a big concern. I think Mundine is going to be a player and maybe kind of work in a slot position and create matchup problems. Hopefully the offensive line steps up and creates the holes lost on the left side.

Absolutely. Those are coming Wednesday and Thursday in the positions of power and positions of concern blogs...

Wanted to spread it out a little so we could have something every day this week.

Thanks for the article, Tait.

Hope you're right about the D-Line, cleveland. We haven't had pressure on the quarterback consistantly up the middle since James McClinton. Would be nice if Combs turns out to be a Dana Stubblefield.

I still say WR is our biggest concern. I know we went out and got some guys, but the guys we went out and got last year did not produce. I do have a little bit of confidence that Turzilli is going to be a threat. I hope he improves in the offseason because I could see him having a monster season if he puts the work in.

I think we're going to be greatly improved with Heaps this year, but there's obviously a big question mark on the O-Line and whether or not they can protect him. Guess we'll find out.

Looking forward to football season already! Only 6 months away! Ha.

When you are dead last in wins, points, and passing offense...you need a QB who can get the job done. Our rushing offense was outstanding last year. We'll have to wait and see what Heaps can do with the offense.

Can you elaborate on Prolago, Im thought he was suppose to have been a good catch? Thanks for the football stories, can't get enough.

Don't really know much yet. Probably had to do with opportunity. I never heard of him as a huge pick-up or anything like that, though.

Mr. Tait, Really enjoy your football articles. Hope springs eternal or at least until play starts. One opinion piece I would greatly appreciate from you would be a comparison of potential of this years team versus the potential of last years team. Examples:

Quarterback - potential: perhaps even with last year at the start but after play last year, Heaps potential seems larger now than that for Christ. And word was pretty constant that Heaps was having some really good scrilmmages against the vasity on the scout team.

Running back - better this year for two reasons, no 3-game suspension and both have had a full year plus under our strength coach.

Wide recievers - maybe the key to our season this year. The one skill position we seemed substandard on all year long on. If we have great receivers, we might have a really good year.

Offensive line - I have confidence in Grunhard. We developed a successful running program last year, seems reasonable to expect the same this year.

Defensive line - lots of story lines here - but what do you feel like when comparing current to last year.

Kicking - I am still having nightmares here. Hope is good - success is better, but do you even have a guess? Call me a firm blob of jello on this!

Defensive backs - talk is more schemes may be available - coach speak for we are going to be better? So what is your opinion.

Thanks Matt. Knowing answers is difficult, but your opinions are better than ours as you are closer. I find myself cautiously optimistic. Rock Chalk Jayhawk!

"Running back - better this year for two reasons, no 3-game suspension and both have had a full year plus under our strength coach."

We are so stacked at RB I can't even believe it.

And Bourbon at FB.

Still disappointed that we lost Jackson. Thought he was going to be a big surprise for us next year.

Seems like spring success does not mean success in the fall. Did Crist have a good spring? Just wondering.

Mediocre. Even the word by May last year was that Heaps was our best QB.

The last three years sucked. Man, I hope the optimism pans out with 4 or 5 wins this year, I just can't take having a bad football program!!!

Ditto rockchalk. It would be great to have an elite basketball program and at the very least, a RESPECTABLE football program. I've seen to many long rebuilds and I hope that HCCW if successful, stays here a long time.

5r plan to start, tho there were comments that he realized it was going to take longer (8?), which apparently is helped by his wife liking Lawrence.

Maybe it really grows on all of them and he does stay a long time.

I wonder if this springs game will be more competitive and less scripted. Last years had everyone lining up for the kool aid early. Crist and Heaps looked like studs. Defense looked very stout and ready to rock and roll. It seems there is a quickness to appoint some one as the guy without testing him against real fire. Only one that had that happen was Cummings threw him in against Ou in Norman. Though I've seen a few make the statement those boys were in games late in the season and play calling killed us. Ut, TT, OSU,Baylor come to mind. Open competition will not only bring the team together but everyone will respect he fact that the guy starting earned it out right