What caught my eye at Day 20 of Fall Practice 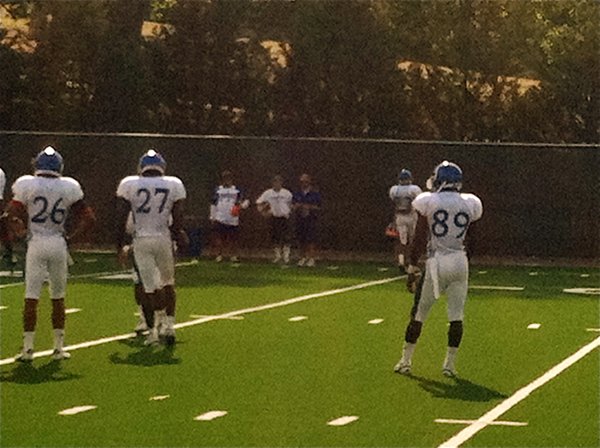 JaCorey Shepherd (89) waits for his turn during defensive back drills as the beginning of Wednesday's practice. by Matt Tait

As promised, here are some of the comments from KU defensive coordinator Dave Campo regarding WR/CB JaCorey Shepherd:

“It’s not a permanent thing,” Campo said of Shepherd’s switch. “We’re trying to develop some depth at a lot of different positions. When you’ve got young guys as back-ups, you never know how things are gonna work out. We just wanted to get a good look at him.”

“He was definitely one of those (offensive) guys (I had my eye on),” Campo said of Shepherd. “He’s a very quick athlete. One thing with a corner is quick-twitch, the ability to plant and drive. He doesn’t know a lot right now about playing over there, but athletically he fits the mold of a guy that has a chance.”

My eyes did not deceive me. KU sophomore JaCorey Shepherd once again was wearing white on Wednesday and working with the defensive backs in practice.

I first noticed the move on Tuesday, when Shepherd was not working out with the wideouts. We get to talk to defensive coordinator Dave Campo after tonight’s practice, so I’ll be sure to update this with Campo’s thoughts on Shepherd as a D-Back.

No word yet if this is a full-time switch or just something they’re trying out, but it seems to be an obvious indicator that Shepherd is not in the immediate mix at wide receiver.

As for how he looks as a DB, I was impressed. He’s got good, quick feet, gets into and out of his breaks with ease and obviously has the speed and athletic ability to hang back there. This could wind up being a good thing for him and the team. We’ll see.

One thing I did like was that he still seemed to be having fun over there. I didn’t see a lot of pouting or moping, which could very easily be the direction he took it. Instead, he was having fun with his teammates and working hard when his turn was up.

More on that in a while.

As for the rest, here are a couple of other things that caught my eye Wednesday:

• I did not see Darius Willis working with the linebackers today, at least not during the first part of practice. Willis, who started all 12 games last season at middle linebacker started the 2012 preseason in a battle with true freshman Schyler Miles for the No. 2 spot at the same position. Both were behind Notre Dame transfer Anthony McDonald, but, with Miles coming along slowly but surely and sophomore Ben Heeney emerging as another option at MLB, Willis seems to have fallen down the depth chart. I’m not exactly sure what his absence Wednesday means. Could mean nothing. He could have been excused for one reason or another. But I definitely did not see him out there during the time we were watching. Worth keeping an eye on.

• Tuesday, I mentioned a new player on the Jayhawks’ offensive line, and, thanks to the solid effort put forth by a couple of loyal readers, we were able to pinpoint the mystery man’s name. Alex Beglinger, a 6-foot-8, 320-pound guard who was a teammate of new KU quarterback Turner Baty last season at City College of San Francisco, evidently has joined the squad as a walk-on. Here’s a look at Beglinger’s bio from Rivals.com: http://rivals.yahoo.com/ncaa/football/recruiting/player-Alexander-Beglinger-140364

It should be noted that Beglinger, No. 78, is not the only new face out there these days. Several walk-ons have come and gone during the past couple of practices and a handful of them will probably still be out there next week when the season starts for real. I’ve been told they’ll be added to the roster at that point, so keep an eye out for that if you’re interested.

• Ty McKinney was not at today’s practice. Still no word. McKinney Watch rages on. Stay tuned...

• Finally, the Coach Weis song of the day was “Wanted Dead or Alive” by Bon Jovi. This was definitely one of the more popular Coach Weis camp songs, as I even heard a handful of players singing along with the classic anthem during warm-ups.

Thanks, Matt. I was tweaking without my daily update!

Run it effortlessly? Georgia Tech did anything and everything they wanted to do effortlessly! I've been a Jayhawk for a long time, and that was a Top 3 mauling...

Unfortunately the other 2 of that top 3 were last year also!

Hey Matt, did you take that picture with a 1983 point and shoot Minolta?

Hey Matt - can you tell us if the coaches use the tower between the two practice fields ?

Does Weis get up there ? Is it easier for coaches to assess practices and players from up there ?

It's typically used for the video guys to be able to film different angles of practice. They also have scissor lifts at the north and south ends of the practice fields, but the one in the middle allows for different views of the formations and stuff.

I don't know for sure that Weis doesn't go up there, but I'm guessing he doesn't. Same for the rest of the coaches.

Tait, is Mcdonald still the projected starter at ILB even with Heeney getting all his reps?

Thanks for all the info!

Hard to tell. Miles has not made the progress needed to be a starter just yet, and Heeney's still pretty inexperienced. I think all three will play plenty this season and I think McDonald's role will come down to his health, which I don't think is that bad at this point.

My odds for who will start at MLB on Sept. 1:

Heeney is speedy, but I think Miles is going to be a nice guy to come in for certain situations, but hey I haven't watched any of the practices. Everyone on a team has a role and the goal is the same. Turn this thing around, Right Now.

Charlie Weis might want to take "Right Now" and make it another song for them from Van Halen.

I am so psyched for this season....I still can't believe we got Charlie Weis..who is my favorite football coach...I never miss a news conference...I love this man...and he is a great guy..yes profanities exist..the man has a temper sometimes...its FOOOTBALLL!!!!....see you next Saturday....and you fence sitters..get your season tickets now!!!!...its going to be fun...and you season ticket holders..go the next step and invest in the Williams Fund...get behind this university...and do it now!