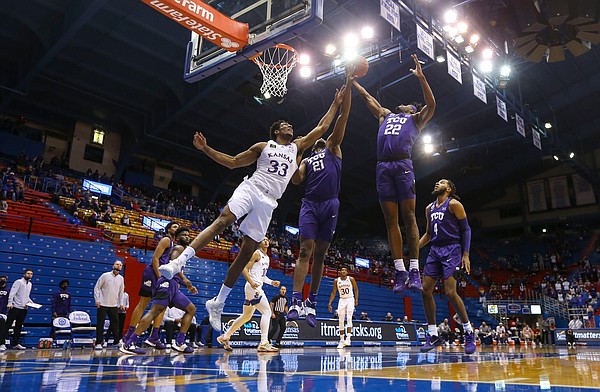 Kansas forward David McCormack (33) fights for a rebound with TCU guard RJ Nembhard (22) and TCU center Kevin Samuel (21) during the second half on Thursday, Jan. 28, 2021 at Allen Fieldhouse. by Nick Krug

Sure, Kansas put an end to its un-blue blood like three-game losing streak Thursday night against TCU. But what transpired at Allen Fieldhouse didn’t come close to resembling the type of turning point in the season the Jayhawks needed.

Senior Marcus Garrett spoke earlier in the week of looking at the remainder of the schedule as a new season. And this matchup had all the elements to be the reboot game KU had been chasing. TCU hadn’t played in 16 days and arrived in Lawrence as one of the two worst teams in the Big 12.

For some reason, though, what should have been an easy A for the Jayhawks played out in the first half like they showed up to a final exam having never attended a lecture nor read any of the course materials.

Misfires multiplied — they were 5-for-23 and missed 11 in a row as the two teams traded woeful droughts — and the Jayhawks just got tighter with every clank and turnover.

College basketball is supposed to be fun, but that 18-point first half was the antithesis of that.

The possibility of KU’s losing skid going from three to four felt very real in the first half, and the No. 15 Jayhawks played at times like that was the only thing on their minds.

“I don’t know if we played tight, per se,” McCormack said of the first half. “I think some people were just thinking too much or overthinking. We just told them to relax, play the game, but still be turned up at the same time. Once we got a well balanced mindset everything came natural.”

They weren’t just bad in the opening 20 minutes. They were abysmal. It was troubling. Any of the Big 12’s top teams could’ve buried KU by halftime. If this was an NCAA Tournament game in Indianapolis in March, even against a double-digit seed, the Jayhawks would’ve been packing their bags and headed home.

But this was a late-January game against a TCU team that entered the night ranked No. 93 in the nation at KenPom.com. So the Jayhawks won.

The result doesn’t mask this team’s issues. Inconsistencies continue to plague KU. The extreme fluctuations in the effectiveness of individual players from game to game or even half to half has kept the Jayhawks from achieving their typical elite status. Jalen Wilson went scoreless in 18 minutes against TCU. Christian Braun only attempted three shots in 27 minutes. Both have proven this season they are capable of far better.

For much of the year, the volatility in how KU plays defense has been at the front of head coach Bill Self’s mind.

After the Horned Frogs shot 35% from the floor and coughed up the ball 22 times, on this night at least, Self felt better about one of his team’s problems.

“We didn’t play great offensively the first half. We guarded for the most part for 40 minutes,” Self said. “Really proud of our guys for how they competed. I know they’re feeling some pressure. And they needed to enjoy this and I’m going to, too.”

It took an unexpected second half burst onto the scene from junior backup Tyon Grant-Foster (nine points and five rebounds in 17 minutes) and David McCormack playing to his potential — and even connecting on the first 3-pointer of his college career — in the final 20 minutes for the Jayhawks to recover at home and beat TCU.

But the Jayhawks have been in such a rut of late that they only focused on the positives afterward.

“A win is a win at the end of the day,” junior Ochai Agbaji replied, when asked whether the Jayhawks left less encouraged than they typically would following a victory. “Coming off of three straight losses, that’s what we just wanted to come in here and do, no matter what. You have to win games like those where things aren’t going our way offensively, and we’ve got to really lock in defensively and make them play bad. Those wins are always fun, and I think all the guys are enjoying this one, too.”

Self didn’t go as far as to call what happened fun. But he, too, surely while considering the psyches of his players, opted not to dwell on the negatives.

That’s what Self said because that’s what his Jayhawks needed to hear at this stage of a season that hasn’t lived up to his standards.

Even so, KU enters a challenging trip to Tennessee having merely survived against TCU.  The Jayhawks didn’t look like they started a new season. They’ll have to put off hitting that reboot button yet again, as they hope to eventually evolve into a team that can make a deep NCAA Tournament run.

Hey, it could be worse. We could be Duke, UNC or UK.

But at this point it's hard to imagine us doing much in the tournament this year.

Tennessee is going to feast on KU’s pitiful attempt at offense.

18 points at half? I dunno. I feel like it's just excuse after excuse when you don't play well. But that's what happens when you lose and you're not accustomed to losing this much. That 2013 team did respond and went on a 7 game win streak. I really don't know what I'm going to get from KU game to game. McCormack is the only thing that seems somewhat reliable right now. They did get a lift from the bench this game and grant foster finally played closer to his capability. That was somewhat encouraging. I'm trying to glean positives and will stay positive but it's one thing to have an "off-night" against an inferior opponent, but the mistakes have stayed consistent no matter who we have played. Sloppy passes, bad turnovers, taking bad shots, not rebounding well. Most of that is effort and game awareness related. I don't see any true leadership from Agbaji or Garrett. I'm surprised by this. McCormack honestly seems like the best vocal leader currently. Maybe a win gets them going in the right direction, and maybe winning by playing good defense gave them some confidence on that end of the floor. I hope so. Saturday is an opportunity, take advantage of it.