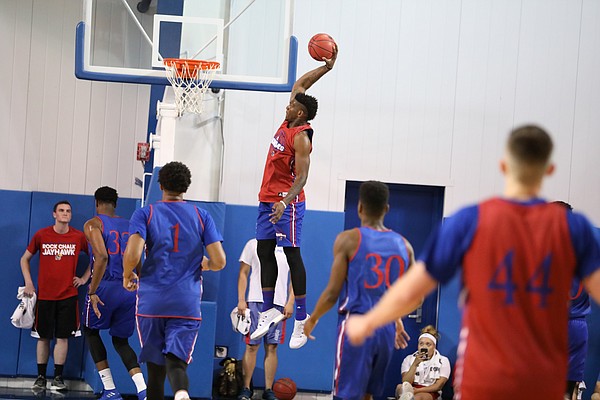 Red Team forward Silvio De Sousa (22) soars in for a dunk during a scrimmage on Tuesday, June 5, 2018, at the Horejsi Athletic Center. by Nick Krug

Both have just one season of college basketball experience on their résumés. In terms of height, one of them has just one inch on the other. And when it comes to fit, either of the two University of Kansas big men have the ability to partner effectively inside with 7-footer Udoka Azubuike.

So which sturdy forward is the man for the frontcourt supporting role next to Azubuiike when KU plays big? Silvio De Sousa or David McCormack?

Head coach Bill Self and his staff, of course, have much of the offseason, preseason practices, scrimmages and even exhibitions to navigate before they really have to figure that part out.

In the meantime, the rest of the Jayhawks should get to witness quite a competition between the 6-foot-10, 260-pound McCormack, who became a more impactful player for KU late in his freshman season, and the 6-9, 245-pound De Sousa, whose first year of college basketball followed a similar path before the NCAA ruled him ineligible for what would have been his sophomore season.

“It could be,” McCormack said recently, when asked whether his battles with De Sousa in the weeks and months ahead could determine which of them enters the 2019-20 season as a starter. “But, I mean, I see it as friendly competition, pushing us to get better. And I know either way it’s going to benefit us both.”

As a freshman this past season, McCormack played in 34 games, averaging 3.9 points and 3.1 rebounds in 10.7 minutes a game. The big man who played at Oak Hill Academy (Va.) as a prep finished his debut college year shooting 62.5% from the floor, and proved to be far more effective toward the end of the schedule, after growing more comfortable at the collegiate level.

In early March, McCormack put up double-digit points in three consecutive games. In his season finale he provided 11 points and 6 boards against Auburn. McCormack projects as an overall more effective player for KU as a sophomore, particularly with the positive individual momentum that led into his offseason. 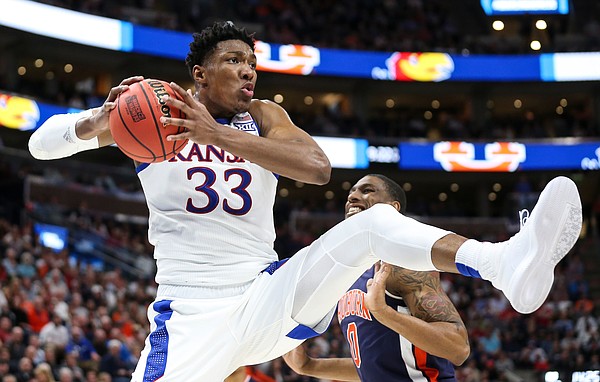 De Sousa’s a lock to blow away his previous season’s numbers, as well. Before breaking through late in KU’s 2018 Final Four season, De Sousa often played sparse minutes when asked to prove his merits to Self. Four minutes there, two minutes here. De Sousa played one minute three times in his 20 appearances off the bench for KU. In half of those 20 games he played four or fewer minutes.

It’s already been more than a year and two months since De Sousa proved in an Elite Eight matchup versus Duke (4 points, 10 rebounds and 1 block) that his presence can change a game for the better for KU. The big man never got the chance the following year to show off how much he had added to his repertoire since putting up 4.0 points and 3.7 rebounds in 8.8 minutes as a freshman, when he shot 68.1% from the floor.

Ahead of his junior year with the Jayhawks, the forward from Angola expects his clashes inside with McCormack will be intense.

“Oh, yeah,” De Sousa began, before making it clear that didn’t mean any animosity existed between the two KU bigs. “Battles are on every team. Everybody who wants to play, they must earn it.”

After watching closely as McCormack developed into a more forceful presence inside, De Sousa assessed that his teammate had a good freshman season.

“So I’m going to have to battle and fight every single day and just kind of earn the spot,” De Sousa added.

These two will be tussling in the paint and around the rim on KU’s practice courts, but how they handle various other parts of the job is likely to dictate who plays more.

If Self wants to start two big men, rather than four guards around Azubuike, ultimately, the forward who emerges as the starting 4-man will be the one who is the best fit for the lineup overall. And that might come down to which of them is more comfortable operating from the high post and/or playing some on the perimeter in order to better balance the floor.

Neither has proven in live action what he can do in that role, and neither is likely to look as natural doing so as Dedric Lawson, for example.

Both could kill it on the offensive glass playing next to Azubuike and both burly forwards possess the potential to make the paint a treacherous place to visit for KU opponents.

However, unless one of De Sousa and McCormack unexpectedly dominates the other, making the victor a no-brainer of a decision for Self, it could come down to other intangibles. Who is more versatile defensively? Which one can keep the ball moving offensively and feed Azubuike in the post? Who can drive the ball not just to score but to help keep the offense flowing?

They’ll have all summer long and then some to fine tune those aspects of the game that might not come as naturally as a jump hook off a post up.

De Sousa seems to have the more natural jumper between the two, and not because of that, but due to the tenacity that characterizes much of his game and his bounce, the sure to be fan favorite inside Allen Fieldhouse who won his appeal after the NCAA robbed him of a year of his basketball career would be my pick to win the available staring job up front.

And McCormack would be a terror of a first big off the bench.

Maybe a dumb question but is Silvio considered a Junior from an eligibility standpoint as mentioned in the article?

Yes. He lost a year of eligibility for his Spring 2018 play (wasn’t always the case, but I forget when the NCAA stopped doing partial years for December starters as they did with JoJo White in the 1960s), and he lost a year with the NCAA penalty. He has 3 years left to play two seasons, starting with his junior season this fall.

What I would give to be able to, just one time, do exactly what Silvio is doing in the photo. My goodness, I hope they have a spare rim close by.

Brett, old buddy, I had exactly the same thought when I saw this photo. My other thought was, dammit, what would our season had been like if this nice young man hadn't been royally screwed by the NCAA!!!???

I think we all know the answer...the streak would be still alive, KU would have made the Sweet Sixteen...and maybe more and Silvio would probably be about to make some big money for his family via the NBA!!!

But now instead he is going to help us bring home a natty!! Much better than S16. Honestly, we really whiffed hard on recruiting high school kids this year, but I can't think of a better year for herd thinning and bringing back the best players. We lost worthless Moore and KJ, as well as Grimes who was also worthless most the time. We brought back Dotson, Dok and De Sousa. I still have mixed feelings about Dedric. I mean, on paper, he looks like a magnificent player, but from the eyeball test, he just didn't seem like an elite player (though I admit the emergence of his three point shooting was definitely huge down the stretch for us).

I don't agree with the premise of this article. DMac is a backup for Doke, period. He cannot play next to him for extended minutes as their games are VERY similar and neither one can play from the high post effectively, shoot from 15 feet with any consistency, drive to the basket, etc. They are both effective at the same things, namely scoring near the basket, rebounding, and catching lobs.

Silvio on the other hand while not an ideal type of player at the 4 next to Doke (that would be a long and athletic guy who can guard the 3pt line and also shoot the 3 effectively), Silvo certainly has a better chance of making midrange jumpers and driving to the basket, and he's the best rebounder of the bunch.

So I suspect it will be Doke & Silvio starting, DMac will back up Doke, and all 3 will see some time at center if/when we go small with a single post player. Udoka will get 25 minutes or so (foul trouble and conditioning have traditionally limited his minutes), Silvio will get 25-30 minutes, DMac will get 15-20 minutes or so, and Lightfoot & the small ball 4's will get the remaining 5-15 minutes.

I tend to agree. We are very fortunate to have all three of those bigs coming off dominating stretchs just prior to them not playing. All should have high confidence levels. Its going to be great!

The chances are good that at least one of these three guys will be in foul trouble in every game so it’s great that we have three of them to rotate in and out.