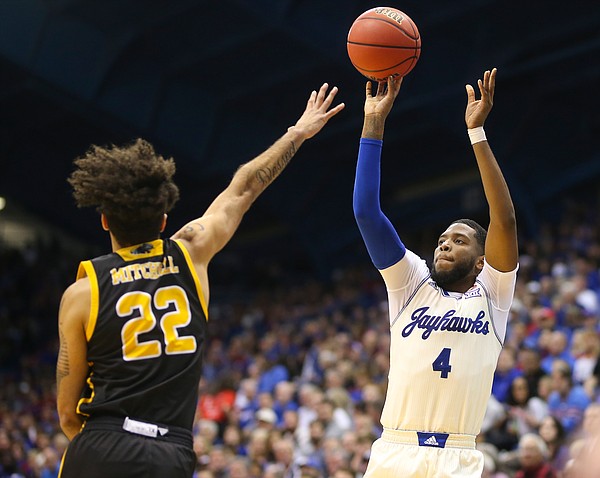 Kansas guard Isaiah Moss (4) pulls up for a three over Milwaukee guard Shae Mitchell (22) during the second half, Tuesday, Dec. 10, 2019 at Allen Fieldhouse. by Nick Krug

Kansas basketball coach Bill Self was in the middle of describing how his team, now ranked No. 1 in the country, needed to improve in “a lot” of areas when he raised eyebrows with a statistical tidbit.

Wait a minute. What?

No, Self didn’t misspeak. Nor was he attempting to speak into existence some implausible goal for his team.

The very same Jayhawks who have connected on four or fewer 3-pointers in four of their 10 games so far and shot below 35% from long range in two other outings are the Big 12’s most consistent shooting team — at least as of mid-December.

KU (9-1) is shooting 37.3% from behind the arc to date, not an impressive number by any means. Self’s recent teams hit better than 40% from 3-point range three seasons in a row during Devonte’ Graham’s sophomore through senior years, for example.

As of games played on Sunday, KU ranked 51st nationally in 3-point percentage. Good. Just not great. And, most of all, surprising. Maybe it’s just the hangover from KU’s 35% 3-point shooting season a year ago, but this year’s KU team doesn’t seem like one that can deep-six opponents with deep 3’s.

The Jayhawks’ strength would appear to be its still improving defense, which is limiting opponents to 38% shooting overall (33rd nationally) and 29.9% on 3-pointers (74th). KenPom.com ranks KU as the No. 9 team in the country in terms of adjusted defensive efficiency.

So what if, on top of that and the presence of 7-foot Udoka Azubuike, who is making 83.1% of his shot attempts in the paint, KU also can maintain its spot as the best 3-point shooting team in the Big 12?

Well, for one thing this won’t be much of a race for the conference title. That’s one significant “what if,” though. Every Big 12 team except for West Virginia is attempting more 3-pointers a game than KU’s 20.1. And the Jayhawks are averaging 7.5 made 3-pointers per outing, trailing TCU (9.4), Texas (9.1) and Baylor (8.8) in that category.

KU could separate itself from the rest of the conference quickly by getting rid of the long-range shooting discrepancies that have characterized its first 10 games on the schedule. After KU’s drubbing of Kansas City on Saturday, Self only referred to KU’s current standing as the Big 12’s best 3-point shooting team to bring up that the Jayhawks actually need to be better.

“You've got to be able to stretch the defense in order for this team to be as good as we can be. And we’re so inconsistent,” Self said.

While the Jayhawks made 10-plus 3-pointers against four outmatched opponents — UNC Greensboro, Monmouth, Chaminade and Milwaukee — against three of their toughest foes to date, they were 4-for-9 in a loss to Duke, 4-for-11 against Dayton and 6-for-13 versus Colorado. They also easily survived a 1-for-14 performance against East Tennessee State and a 4-for-18 night versus BYU.

“We have to be the most inconsistent 3-point field goal percentage team around,” Self said. “And so we’ve got to get more consistent in that area.”

The Jayhawks need that stability in their outside scoring, as Self knows, because they haven’t even played a true road game yet, and they won’t be able to clank their way to wins at No. 18 Villanova (8-2) or Stanford (9-1) in the next couple of weeks, nor in Big 12 arenas in January and February.

KU’s best 3-point shooter, graduate transfer Isaiah Moss, is making 1.8 of his 4.2 3-point tries per game. The Jayhawks need to be creating even more catch-and-shoot opportunities for the 6-foot-5 Moss, their ultimate floor spacer, in his 22.6 minutes per game.

The whole point of any season is finding ways to maximize your team’s potential, and KU becoming a steady 3-point shooting team — with the help of some more shots for Moss — would allow the Jayhawks to play to their offensive ceiling.

They don’t have to rely upon 3-pointers as much as some other Big 12 teams this year, but the Jayhawks can make their games away from Allen Fieldhouse a little more manageable by knocking down a high enough percentage from outside that defenders can’t afford to pack the paint.

(Through games played on Monday)

The most dangerous one is not the best %, unfortunately. It's the one with the most attempts, and from many different players in the team.

I guess the whole league sucks at the trifecta...not a total surprise based on the increased distance this season.

It would be interesting to do a fresh "restart" tracking of all three point shots by Big 12 teams after the first of the year....bet the percentage will make an improvement.