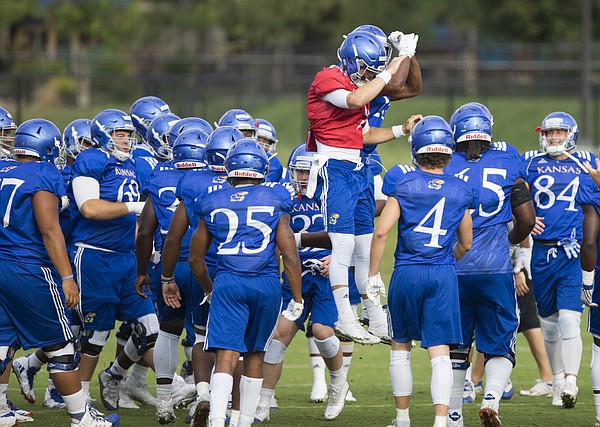 Kansas quarterback Carter Stanley gives a flying bump to running back Kendall Morris, obscured, as the Jayhawks gear up for practice on Friday, Aug. 18, 2017 at the grass fields adjacent to Hoglund Ballpark. by Nick Krug

When David Beaty leaves a preseason practice, it’s difficult for the upbeat Kansas football coach to limit the best plays he saw to one or two.

So when asked Friday morning following the Jayhawks’ scrimmage what stood out on both sides of the Ball, Beaty proceeded to identify more than a dozen players who pleased him with their contributions.

Beaty said KU emphasized a lot of situational work during the morning session, and highlighted the following athletes as standouts from his perspective.

• Travis Jordan, fr. WR: “Stuck out to me a lot. He had several targets that came at him and he had some health issues early in camp, and he’s coming back off that and he made several plays today, which were really nice plays — required strong hands and powerful attempts at the ball with guys hanging all over him. That was impressive.”

• KU’s defense as a whole: “We were down on the goal line a few times today, and watching Joe Dineen, Mike Lee, Osaze Ogbebor, (Keith) Loneker … Daniel Wise made a couple great plays today. Those guys up front, it seems like the tighter we got down the better they played.” 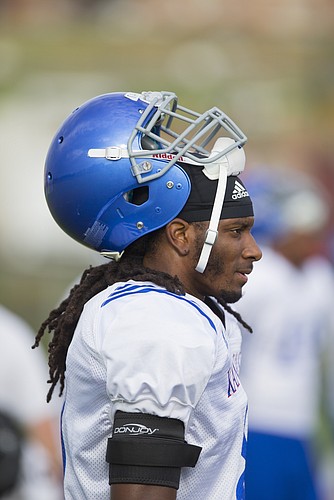 Kansas cornerback Shakial Taylor watches from the sidelines during practice on Friday, Aug. 18, 2017 at the grass fields adjacent to Hoglund Ballpark. by Nick Krug

• KU’s secondary: “Defensively, we’ve got to get more turnovers. But Shak Taylor still continues to show out to me, and Tyrone Miller was running around knocking people out today. Enjoyed watching him play.”

• Taylor Martin, jr. RB: “Has played really well over the last week-and-a-half. He’s been explosive. He had a couple of unbelievable runs today. Another one in that stable of backs that really is doing a good job for us.”

• KU quarterbacks: “I thought all three quarterbacks played pretty good today, made good decisions. We’ve had one interception in the last three scrimmages, and it was by a brand-new guy. It wasn’t by Peyton (Bender) or Carter (Stanley). So they’re taking care of the ball, which is something (offensive coordinator Doug Meacham) has done a great job of stressing.” 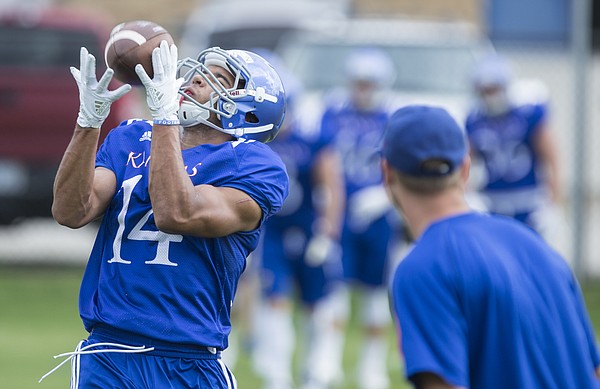 Kansas receiver Kerr Johnson Jr. pulls in a catch during practice on Friday, Aug. 18, 2017 at the grass fields adjacent to Hoglund Ballpark. by Nick Krug

• Kerr Johnson Jr., jr. WR: “Everything gets quiet and the next thing you know he’s making a play.”

• Quan Hampton, fr. WR: “Just the little Mighty Mouse. Number six, Quan Hampton. That dude is fast,” Beaty said, mid-chuckle, “as all get-out. He is quick and he is strong. I saw him stiff-arm somebody — I’m not going to mention him, because they’ll wear him out over it. But that little dude is strong. He is really fun to watch, man. I’m excited to see what Coach Meacham does with that guy.”

• Dom Williams, fr. RB: “Man, he had a couple of really good runs today. He’s hard to tackle now. … It was early in the scrimmage and I basically put a big challenge in front of our defense about, ‘Are you gonna be able to get this guy down? Really. I mean, he’s a freshman. Can you get him down?’ And they hit him later,” Beaty said, with a laugh. “They got him one good time, knocked the breath out of him. But that dude, he can run.”

After Beaty spoke, a few KU players offered their thoughts on the most memorable plays from the morning’s scrimmage.

“The big stops in the red zone,” the Big 12’s preseason Defensive Player of the Year said. “The offense was at the five-yard line or closer and then we would come out with two or three stops like that. I think that was the most impressive thing.”

As Beaty alluded to, Armstrong thinks the defense has a tendency to respond when the players’ backs are against the wall.

“I think that’s how we’ve been for a while,” Armstrong added. “We need it to be like that every down — not just in the red zone. I like how we’ve come together. We’re like a brick wall, nothing gets through us.”

“There was a third down in the red zone where we just had four verticals called,” Bender shared, “and we converted that. That kind of stood out to me that everyone was dialed in, and it was good converting on third.”

“It was Cover-2 and he got a good release,” Bender said. “Hit him at about the three-yard line and he just kind of reached out his arm and got it in.”

“Taylor (Martin) had a really nice run on an inside zone that he took for probably 45 or 50 yards,” Bender revealed. “So I’d say out of all the plays those two kind of stood out to me.”

“I haven’t watched the film yet so I can’t think of one in particular, but we had some great situations,” Stanley began. “We had our first four-minute situation of camp today, which is when the offense is up and you’re just trying to run out the clock at that point and win the game.”

In that period, Stanley said he was encouraged by the consistency of the offensive linemen in front of him.

“I don’t think we had any busts up front,” the QB explained. “We ran the ball and we converted on third down, which is nice. Got the ball out to Bobby Hartzog for some first downs, so that extended the drive.”

Travis Jordan was a recruit I was really excited about KU landing so I'm glad he's doing well. He's going to make a huge impact for the team.

Dirk- Just saw your question. Octavius Matthews has yet to practice.