KU in midst of 'big week,' preparing for Texas

Kansas University football coach Charlie Weis made it clear at his weekly press conference the amount of respect he has for Texas — the Jayhawks’ (2-1) first Big 12 opponent of the 2014 season.

Weis had plenty of KU-related topics to discuss, though, too. The third-year coach touched on all three facets of the game while meeting with the media Tuesday afternoon.

• On upcoming 3 p.m. Saturday kickoff vs. Texas (1-2): “Obviously this is a big week for our program,” Weis said. KU has so many Texas natives, and it’s homecoming. “We’re gonna have to play really, really well to have a chance.”

• Weis knows former Longhorns coach Mack Brown well, but he won’t be reaching out for inside tips. “I had a couple of humorous texts with Mack this week on that subject,” the KU coach said. Weis wouldn’t make that call; he would gladly take Brown’s call. Weis wouldn’t want to put Brown on the spot. 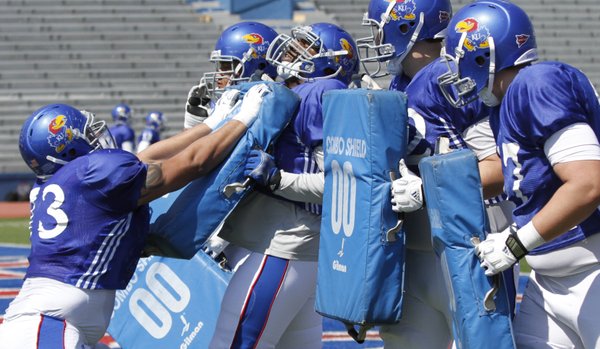 • Junior RT Damon Martin has a couple of tests today regarding his health. Senior RG Mike Smithburg (appendectomy last week) will see the doctor tomorrow. Neither played on Saturday vs. CMU. KU could have neither/one/both this weekend. Weis doesn’t know yet. He would love to have at least one of them back.

• Redshirt-freshman O-lineman Joe Gibson has been sick and hasn’t practiced in a couple of weeks. So true freshman Jacob Bragg is listed at No. 2 at center this week. But if Weis had to have someone go in for starting center Keyon Haughton, he’d probably go with Bryan Peters. Peters is a “jack of all trades.”

• This week, there will be a much different look from the opposing defense when QB Montell Cozart drops back to survey the field. Those easy throws, there won’t be as many of them as there were last week. Weis feels as if KU has some good answers for that problem, though. 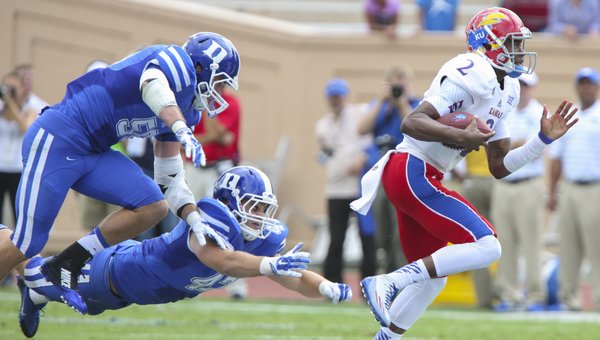 • Teaching pocket presence is something that can happen. A lot of things with a QB have to come naturally. Over time, Weis anticipates Cozart will become much better in the pocket. Cozart takes his first step backward when pressure comes, and that’s because he is trying to get outside and use his speed.

• KU has to work on Cozart’s execution with the option, too. They will be spending more time on that. “There are a lot of things that are new.” Weis thinks Cozart is perfectly capable.

• Senior nose guard Tedarian Johnson graded out as one of the best players against Central Michigan. Weis thought it was the best game Johnson has played at KU.

• There were fewer issues between Cozart and center Haughton this week on snap exchanges, but there are still things to correct. Obviously, there was a false start called on “everyone but the center” against CMU. 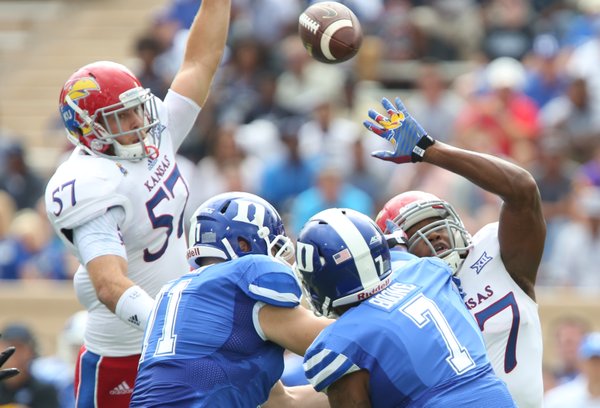 • Junior weak-side linebacker Jake Love has great instincts, which showed up when he got a clean look on a blitz vs. CMU, sniffed out the play and got to the screen pass for a loss. “If you smell a rat, it’s a rat,” Weis said the coaches like to say.

• KU won’t back off on the physical practice approach that the team used last week. It’s never going backward. It’s only going forward. KU doesn’t have a really deep roster, so there is a chance guys can get banged up when you hit hard in practices. But if they don’t go hard Tuesdays and Wednesdays, they won’t be ready on Saturdays.

• Junior receiver Tre’ Parmalee had probably the best preseason camp of anyone on the team and then banged up his elbow. Now he’s back and ready to go, so he is on the depth chart. Those freshmen receivers aren’t even in the same breath as junior receiver Parmalee right now.

• Texas, after scouting KU’s first two games, probably feels pretty good about rolling into Lawrence for the start of Big 12 play. … Weis expects a close game around halftime, and then the perspective might change.

• KU’s defense, other than the big plays in the Duke game, has looked good. Kansas can’t give up big plays, though. Or have situations where a team rallies like SEMO did in the fourth quarter. The Jayhawks, defensively, weren’t perfect vs. CMU, but they ended up only allowing 10 points. KU will have a problem if it gets in a game where the scoring is in the 40s.

• Texas has a lot of good, physical players, so facing CMU and its old style the week before could set up well for Kansas.

• With this being homecoming, KU will have some former players coming in and they will be on the sideline. A couple of NFL players have bye weeks. … Until the game’s over, it’s all business. 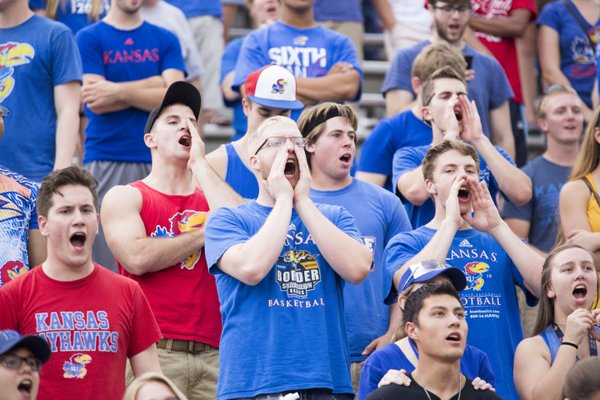 Fans shout "rock chalk" across the stadium after a key Kansas first down during the second half of Kansas' game against Central Michigan Saturday afternoon at Memorial Stadium. by John Young

• Weis was pleased with the crowd vs. CMU. Would he like 15,000 more? Sure. But the crowd came despite threat of bad weather and supported a team that had struggled the week before. … There is a great forecast for Saturday and the game will be over by 6:30, so Weis is hoping for an even better showing.

• On KU’s kicking situation … Sophomore Matthew Wyman is capable of hitting more than 50 percent (4 of 8 this season). If Weis thought freshman kicker John Duvic was capable of outperforming Wyman, Weis would make the change. … There are only a handful of guys that pan out to be front-line kickers. … This past week, the kick Wyman missed (from 35 yards), he had no excuse, and that’s no big secret.

• Junior WR Rodriguez Coleman isn’t on the depth chart. So don’t expect to see him play. … Nigel King gives KU the best chance to win, and King is backing up both Tony Pierson and Justin McCay. King is a tough guy, just like McCay.

— Listen to the complete press conference: Weis talks Texas, a 'team in transition'

— Also, hear from KU coordinators Clint Bowen and John Reagan: Bowen and Reagan on the challenges of preparing for Texas

Can someone explain why Wyman jumped Duvic in the first place. Duvic was ahead of Wyman all camp never got a shot. I get he probably doesn't have the leg that Wyman has, but if he's 90% from inside 40 yards, let him do that and let Wyman try the longer FG's since we know he has a leg up 55-60 yards.

Weis basically said he pissed down his pants in practice once he was given the job.

This made me LOL

I'm curious about Coleman ... Is he injured? Not doing well academically? Or just flat out being out played?

CW's comments are interesting in not talking about Coleman, but mentioning the others - that King is physical like McCay. Maybe Coleman isn't manning up the way the coaches expect. Maybe that's also why Jr Parmalee is so far ahead of the freshmen.