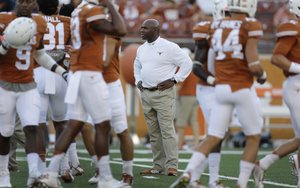 Forget the fact that they enter Saturday’s 3 p.m. game at Memorial Stadium with a first-year head coach, a 1-2 record and a lack of identity.

The burnt orange on their uniforms and years of success give the Texas Longhorns all they need to catch any opponent’s attention.

Kansas University coach Charlie Weis emphasized that on Monday morning’s Big 12 coaches teleconference, when asked what it would mean to pull out a victory this weekend against the Longhorns.

“We have a lot of respect for Texas, the program, the tradition, everything that goes with it,” Weis said. “... We understand that we’re gonna have to play very well to have a chance. We don’t underestimate the Texas athletes one bit.”

One of the biggest reasons for that is the fact that 25 players listed on the KU roster in this year’s media guide are natives of the Lone Star State and grew up watching and/or rooting for the Longhorns as young athletes.

Weis and his coaching staff are well aware of that fact, and they hope to tap into it this week as a source of motivation for the Jayhawks (2-1).

“Very few of those guys ever got a sniff from Texas (in recruiting),” Weis said. “So there’s a lot of incentive for these guys to play their best game, realizing they have a lot of physical guys, and we’re gonna have to play very well to have a chance.”

UT coach Charlie Strong, who won his debut over North Texas but has since lost to BYU and UCLA, uttered similar words about his team, which lost starting quarterback David Ash for the season because of concussion issues and has endured several suspensions during the season’s first few weeks.

“It’s about effort,” Strong said. “It’s all still about us and going out and competing and playing with a sense of urgency. We just need to be a team that goes out there and plays with some effort and with great assignments and fundamentals and technique. You have to win every snap and every play and just play hard.”

Weis hopes to draw on recent experiences versus UT for confidence.

Two years ago, KU held a lead on Texas until the game’s final few seconds. Last year in Austin, the Jayhawks were driving to make it a one-score contest in the third quarter before the game got away from them.

“Even though the coaching staff is different, and they’re doing different things, Texas still has a bunch of good players,” Weis said. “And in the last two years, our team has been very competitive against Texas.”

Like in those matchups, Weis believes the Jayhawks have to approach this weekend’s meeting a certain way.

“Our team is not built to get into shootouts,” he said. “Our team is more built to try to hang in there and win a slugfest. If we can keep the games like that, it really minimizes your margin for error, but I really believe that’s the mentality we have to have. If we’re gonna win football games, we have to play with that mentality.”

During the last few seasons, 11 a.m. was the most popular starting time for KU football games.

So far this season, early afternoon games have been more en vogue.

Add another such start to the list, as the Big 12 Conference announced Monday that KU’s Oct. 4 kickoff at West Virginia was slated for 3 p.m. The game will be broadcast on Fox Sports Net.

The WVU rematch will mark the third straight early-afternoon kickoff for the Jayhawks, who began their 24-10 victory over Central Michigan at 2:30, will kickoff against Texas on Saturday at 3 and will do the same at WVU the following week.

West Virginia leads the all-time series with Kansas 2-1, with the Jayhawks winning last year’s matchup, 31-19, in Lawrence. Both of the Mountaineers’ wins have come in Morgantown.

“Our team is not built to get into shootouts,” he said. “Our team is more built to try to hang in there and win a slugfest."

Uh-oh. It's awful early in the season to throw in the towel on the Reagan offensive revival.

Coach Weis is being realistic. We have a raw QB, a thin offensive line, only year 1 of Reagan's offensive structure, and we lost our 2 senior RBs right before the season started. I agree with Coach, our offense isn't ready to put up 40+ points on Big 12 defenses.

KU doesn't have the personnel to run the spread yet. The players Weis had been recruiting were to run his pro style offense, not Reagan's up tempo spread offense. It takes time to get the right players into the system.

Aaron - agree. It also takes these players time in the system to fully understand how to execute it. The timing of Reagan's hire was off by 2 years. If Weis would have brought him immediately, we would be in better shape.

"The timing of Reagan's hire was off by 2 years. If Weis would have brought him immediately, we would be in better shape."

I think KU pulls the upset this weekend.

Really? I am not confident that the Hawks will score.

isn't this the title of a story every week...Weis, Jayhawks wary of "insert opponent team name here". Really, there should be an article about who they are not wary off. SMH

There wouldn't be any articles if they wrote about who we are not wary about.

As much as it pains me to say it, there is only one Div 1 school in Kansas with a football program and they reside in Manhattan. This will just be another loss to Texas on the way to not winning any conference games this year. I don't think Cozart had that great of a game against CMU. His completion percentage was decent mostly from short passes. When pressured he cannot complete passes.

Well, at least TU can say the same thing about our hoops team when it comes into town...name on the jersey, colors, tradition. Rock Chalk!

There it is... "Wait for basketball season!"

I'd love to have Bevo for dinner. I'd like it well done please from getting torched by the Hawks.

I don't think a lot of people realize just how bad UT's offense really is. This very realistically could be a game where neither team reaches 20 points. It also could realistically be a repeat of 3 years ago when UT almost had more points than KU had yards of offense in a game where the UT offense gets "healthy". I'm hoping for the former, but won't be shocked if the latter happens.

Of course, UT has played two Top 25 teams already this year which might be a reason for the low numbers on offense.

UCLA gave up 35 point to Memphis and Texas managed just 17 against UCLA. BYU has about as much talent as Duke and Texas scored 7 points against BYU. I watched a good chunk of both of those games and UT is just a bad football team this year as they transition from Mack Brown to Charlie Strong. Do not be surprised if Texas only wins 3 or 4 games this year.

The question is, will Memorial Stadium have more burnt orange in the stands than crimson and blue?

There will be a lot of burnt Orange, but it's not like the Red River game. There might be a good 5000 Texas fans at the game, maybe a little more. The KU fans are just going to have be really loud from the start. Last week the fans were louder, or it seemed so from watching on TV, but we need that stadium with at least 45,000 fans on Saturday for homecoming. Have a red out or something like that. Be the twelfth man even if KU loses, that will be a big lift for KU, especially on defense.

Despite the fact that "Charlie Strong" is a misnomer, at least insofar as his coaching is concerned, this is going to be a tough game for Kansas. Texas lost, yes. Nevermind the insignificant detail that those pair of L's came at the hands of two top-20 teams in the country. A "W vs. Texas" is unlikely, but Ill be a sport. If the Gods are smiling and a couple of them suit up against the Longhorns, and if the Devils wreak havoc with Tejas' QB, then we've at least got a snowball's chance in hell.