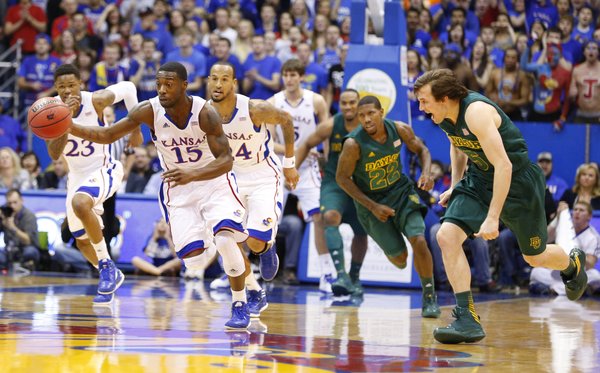 Kansas guard Elijah Johnson takes off up the court past Baylor guard Brady Heslip after a steal during the first half on Monday, Jan. 14, 2013 at Allen Fieldhouse. by Nick Krug

The Kansas men's basketball team ranks 17th in Ken Pomeroy's adjusted offensive efficiency — a measure that takes into account a team's points per possession while adjusting for schedule strength. A year ago, the Jayhawks finished 19th nationally in the stat.

So the Jayhawks are following the same offensive formula for success, right?

Actually, what's interesting is that this year's team varies greatly from last year's in the way it produces offense. 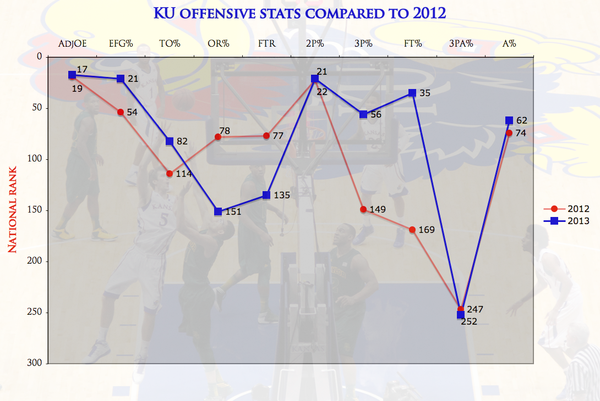 Let's start with the positives for KU: The Jayhawks are a much better shooting team this year, which makes some sense considering they are more balanced offensively compared to a year ago.

Though the Jayhawks' shooting is better — especially on three-pointers and free throws — that hasn't made as much impact as it could because of the team's struggles with offensive rebounds and getting to the free throw line.

KU has grabbed just 32.5 percent of its missed shots this year. If that number stands, it'll be the lowest percentage by a Self team at KU (last year's team was second-lowest at 34.6 percent).

The Jayhawks' free throw rate (37.0) also is on pace to be the lowest in the last five seasons.

Meanwhile, the Jayhawks continue to be a team that shares the ball well, though part of that high assist percentage this year might speak to the fact that the Jayhawks don't have many players that can create for themselves off the dribble.

In the end, KU is having similar offensive success this season compared to last while producing those points in an entirely different fashion.

Though this team doesn't get offensive rebounds or to the free throw line like a typical Self team, it has made up for it by shooting a high percentage while taking care of the basketball better than any Jayhawks team in the past decade.

Your numbers support my "eye test." This team denies shots on defense and makes shots on offense. Last years team tried to wreak havoc. They wanted to turn you over, get out on the break and dunk. It seems we don't get as many transition baskets but we take more jumpers.

The genius of Bill Self, he coaches to his teams strengths!

I'm confused; is this looking at their stats compared to this time of the season last year...or their final numbers?

If you're saying their mid-Jan. numbers are already on par with the entire season last year...that's a VERY good sign.

This is KU's stats this year compared to its final numbers in 2011-12. I've added a note above that hopefully will clear it up a little better.

man I wish I had your job!

Three pointers are the great equalizer in the NCAA tournament.

I thought the same when I read that part of the analysis. However, good perimeter defense is the mitigating factor to minimize the potential "esposure" to a team that could get hot for that one game.

Great stuff per usual Jesse. Is there any way to see this compared against previous seasons? The 07-08 team would be the one I'm most curious about.

You're right about JW, drgnslayr. I often wonder why he isn't a better rebounder. And the team in general isn't very good at it, with one obvious exception: Kevin Young. If the others could just pay attention to what KY is doing and follow his lead, the team could improve its rebounding significantly. He seems to be one of those guys who not only has a nose for the ball, but an intense desire to do whatever he can to get it.

Also, do these numbers take into consideration the fact that with a higher FG% there are inherently fewer opportunities for offensive boards? That correlation seems important. I wish Withey would rebound better as well. I agree with all of the above posts. Some players just have a certain knack for the way a ball will carom off the rim, just as Jeff has a certain knack for getting his hand on a ball that is being shot. KY has that rebounding knack, but lacks the height and muscle that someone like T-Rob had. If he had that kind of power and height in addition to his nose for the ball, he would be amazing on the boards. There are, however, quite a few times that Withey (and others) seem like they are just standing there watching the ball, waiting for it to come to them. They don't always box out, and occasionally they actually watch the ball bounce on the ground off the rim before anybody bothers to go after it. That drives me nuts. T-Rob used to rip the ball out of his own teammate's hands... I want to see more of that!