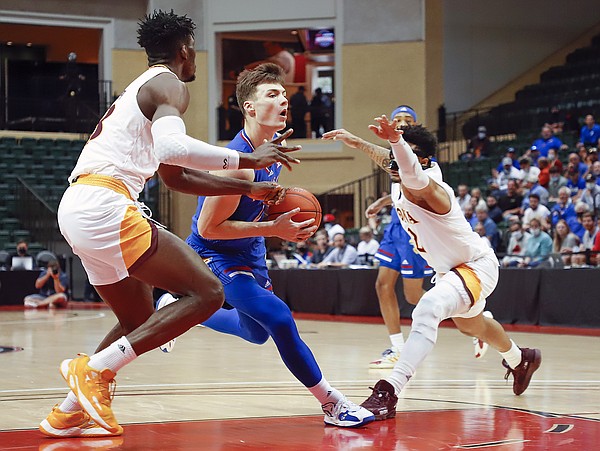 1 – Christian Braun – Brought energy, played D, crashed the glass and consistently attacked the rim on a day when the KU bench was emphasizing the guards getting downhill. In short, another real strong day by Braun, who was easily KU’s best all-around player in Orlando. Twenty points on 9-of-16 shooting with 7 rebounds and 4 assists in 33 minutes.

2 – Ochai Agbaji – Scored when he had to but was somewhat quiet at times, too. His outside shot is not falling with the same frequency, but the rest of his game is solid. Finished with 17 points (on 8-of-14 shooting) on a day when he didn’t seem to really get going offensively. KU also didn’t need him.

3 – Mitch Lightfoot – Didn’t play big minutes, but played important minutes. And delivered 10 points and 6 boards in 15 minutes. The biggest difference between him and McCormack at this point is Lightfoot’s confidence and quick decisions. He attacks and doesn’t give opponents time to react or disrupt. He’s also always willing to battle on the boards, regardless of his chances or the result.

4 – Remy Martin – Martin was good from the jump today. He looked to set up his teammates (5 assists, 1 turnover) and also appeared to play smarter defensively, with less gambling and scrambling. 11 points, 5 rebound and 5 assists, with one turnover, is a pretty good line for Martin, who shot 4-of-6 from the floor.

5 – Dajuan Harris Jr. – This was a pretty typical game for Harris. Nothing outrageously good and nothing all that bad. He had a couple of bad fouls but he also scored a couple of buckets in the paint and dished three assist to one turnover. They’ll still need more from him, but he’s been pretty consistent so far this season.

6 – Joseph Yesufu – The reserve guard who entered the day averaging just 6.6 minutes per game played 12 in this one and provided KU with an offensive spark while showing off his potential in transition in KU’s faster lineups.

7 – David McCormack – Far from terrible but still not very good. There were too many times where his indecision allowed Iona players to knock the ball away or bump him off balance. That leads to fouls and missed shots and a spot on the bench. Did finish a few post-ups better than he had all year, so perhaps the light is coming on. Still a long way to go before it’s shining brightly, though. Final line read 13 points, 5 assists, 4-of-6 shooting and 4 fouls in 14 minutes.

8 – Jalen Wilson – Still working his way back into form and there’s plenty of room for improvement. He played just 12 minutes and shot 2-of-6 from the floor but added five rebounds and was a steadying presence when he was out there with KU’s second unit.

9 – Bobby Pettiford – Pettiford was the first Jayhawk off the bench in this one and, per usual, he looked like he belonged. He didn’t do much in the way of production, but he’s reliable and can get other guys shots while providing ball handling and defensive options.

11 – Zach Clemence – Played 2:13 in the first half and missed his only shot and also picked up a foul by reaching.

12 – Jalen Coleman-Lands – Played the final two minutes of the first half and spot duty in the second but did not attempt a shot or register much on the stat sheet.

CB is our silent assassin! Glad to see his aggressiveness!

1 - CB and there's not anyone even close. He was the best player in a KU uniform this week by a significant margin in my opinion.

2 - Prison Mitch, all the guy does is compete his tail off and do the things that McCormack should with less talent. Possibly our best rim protector right now. Just needs to learn not to foul so much. If not for him and KJ we would have had ZERO inside presence.

3 - Joseph Yesufu, he looks like he's starting to figure out his role. Come in, inject some juice in the team and hustle your rear off. Guy is lightning fast and had some big time grit and grind plays.

4 - Remy Martin, had some big buckets at crucial times and I love this guys attitude. He's on full tilt all the time and his teammates feed off of it. Brings a lot of energy to our squad and the fans.

5 - Och, had his 18 but they didn't seem to come very easy and he should have had more. Didn't need to do as much this game but still made some nice plays and we were better with him on the floor.

6 - KJ, all this guy does is come in and play aggressive and physical. He competes so hard and really gets amped up. You see moments where he's lost for sure, but the effort is second to none.

7 - the rest of the Jayhawks. I know we are figuring out our rotation and there's a lot of mix and matching going on, so it's hard to really get in a rythm to shine. I just thought that this week was a ho hum week and after the top 6 you could put a blanket over them.

This week showed me that right now, we're not quite a top 5 team. Gonzaga, Duke, Purdue and Villanova have all looked much better than us............. but the season has just begun and you can see talent wise we can hang with anyone. RCJH

Matt, feel free to remove my note to you after you've read it, but sometimes the surveys show up an article overlay making the video not viewable or article readable. There has been a post for a couple of days by Keith Swinehart on the Lightfoot/Braun interview in this regard. (Obviously, you haven't seen, hence this note here.)

Might want to fix that particular overlay problem, but also double-check going forward that this doesn't happen. (I've seen this in the past as well.)

I would provide you a screen paste, but the comment section does not seem to allow it.