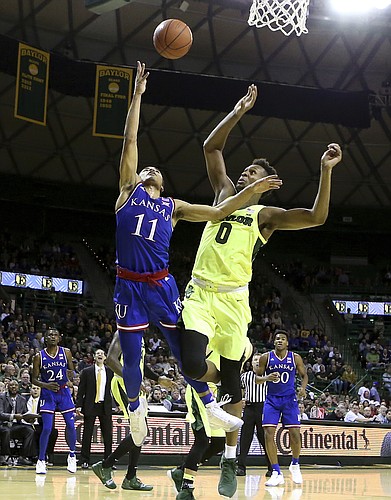 1 – Devon Dotson – Set the tone for the night with a stellar start and bounced back nicely from a rough game against TCU. Finished with 14 points on four shots and added five rebounds and five assists in 33 minutes.

2 – Dedric Lawson – Better than his final numbers of 17 points and 3 rebounds show but not as good as he needs to be. He didn’t do much on the glass, but his five steals and five blocks helped make up for an off night rebounding.

3 – Lagerald Vick – Hit 6-of-8 from 3-point range to move past 1,000 points for his career (on his birthday, no less), but also turned it over four times and was quiet in most other areas, including on the glass, where he grabbed just three rebounds.

4 – Ochai Agbaji – Scored 10 points in 21 minutes, making four of the five shots he attempted. He continued to bring activity and athleticism to the floor, enough that KU coach Bill Self said after the game that Agbaji quickly was becoming one of KU’s better players.

5 – Marcus Garrett – Four points, three rebounds, four assists and a block in 25 minutes might not wow you. But he was the catalyst for everything KU did defensively

6 – Quentin Grimes – Grabbed six rebounds in 27 minutes, which helped make up for his 2-of-7 shooting night. Also chipped in 2 of KU’s season-high 11 blocks.

7 – K.J. Lawson – Double-digit minutes for the second game in a row, the older Lawson wasn’t great but he did enough to explain why he was out there.

8 – Mitch Lightfoot – The shot to the mouth limited his minutes and may have hurt KU in the rebounding department. We’ll give Lightfoot the benefit of the doubt here for the two boards and one block he did get in 3 minutes on the floor.

10 – Charlie Moore – With most of his minutes going to Agbaji, Moore played just second minutes and didn’t do anything to earn more, misfiring on both shot attempts, including one from 3-point range.