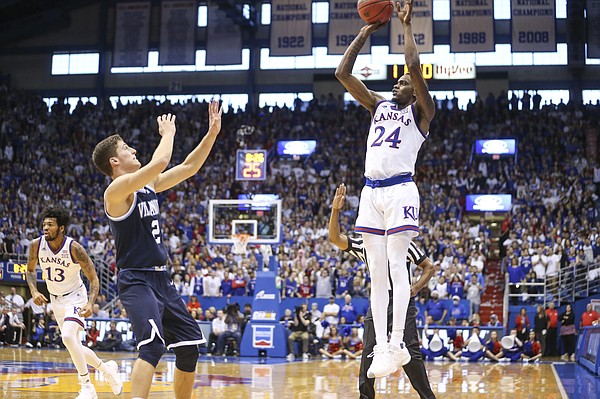 1 – Lagerald Vick – Earns the top spot because of the degree of difficulty of so many of his shots. Bounced back from a bad week in a big way with 29 points and 7 rebounds in 39 minutes, including 9-of-15 from the floor. Also flashed that killer confidence and mean streak that this team needs.

2 – Dedric Lawson – So good in the first half and so solid with his positioning. Villanova had no one who could guard him and Lawson took full advantage of that for yet another double-double, 28 points and 12 rebounds in 38 minutes.

3 – Devon Dotson – Hounded Villanova’s Collin Gillespie all game and came up with a couple of huge buckets and free throws down the stretch to ice the tough victory.

4 – Marcus Garrett – Forget his offense, which came in doses. It was Garrett’s defense, both making life miserable for Eric Paschall and by hounding opposing ball-handlers with his quick hands. Four steals, four rebounds and three assists more than made up for scoring just one point.

5 – Mitch Lightfoot - Numbers weren’t as good today as they were against New Mexico State, but his impact was. KU had some of their best stretches with Lightfoot on the floor and the junior could quietly be carving out that young Landen Lucas role.

6 – K.J. Lawson – Played 14 minutes because of Grimes’ struggled but didn’t do anything spectacular. Does have a knack for getting his brother the ball in good scoring position.

7 – Charlie Moore – Not his best day. Missed his only shot, turned it over three times and fouled three times in 18 minutes.

8 – Quentin Grimes – Another rough, rough day for Grimes, who attacked a couple of times but spent most of the day a step slow and turning the ball over.

9 – David McCormack – Only action came at the end of the first half, when he didn’t have time or opportunity to do much.

Grimes’ attempted entry passes makes me think that he has a future with the American Telegraph Company.

I hope Moore realize what he's done - he could've cost us a loss by not going all the way to the rim when we're only 3pt ahead with still 50sec left.