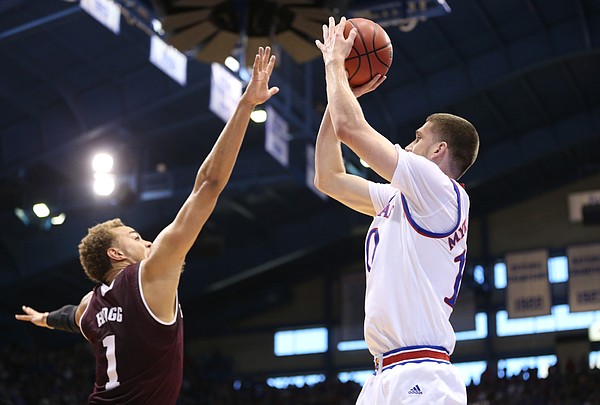 1— Svi Mykhailiuk: Scored 17 of his game-high 24 points in the first half. Also had six rebounds and three assists without a turnover. Made 4 of 8 3-pointers and all four free throws.

2 — Marcus Garrett: Stood out defensively supplying on-time help and had two steals and several deflections. Made all four of his field-goal attempts, including a 3-pointer from the right corner in the second half. Scored nine points.

4 — Udoka Azubuike: Received a technical foul after slamming and looking down at an opponent on the ground beneath him. “I think he might have said something, too,” KU coach Bill Self said of the third foul that put his center on the bench for a long stretch. Azubuike had a terrific first half with six rebounds and four blocked shots. Didn’t get any of either in the second half, when he scored six of his eight points. Didn’t shoot any free throws after spending time working one-on-one with Self on his form.

5 —Devonte’ Graham: Totaled eight points, six rebounds and seven assists but made just 2 of 11 and missed all six shots from inside the arc. On drives to the hoop he sometimes looks as if he’s trying to draw a foul at the expense of giving himself the best chance at making the shot by keeping his eyes up and on the target.

8 — Silvio De Sousa: Played two first-half minutes and received a huge ovation for his blocked shot. Self said he was hoping to play him more, but Kansas was unable to maintain its big lead in the second half.