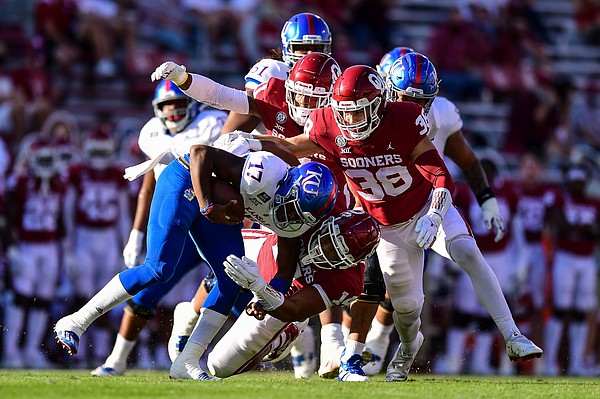 After an offseason that featured plenty of change to the roster and the coaching staff, the Kansas football program will be below the national average in terms of returning production ahead of the 2021 season.

Bill Connelly of ESPN released his updated returning production rankings via his personal Twitter account on July 6. The list should provide a better understanding of where all 127 Division I rosters stand in regards to what they are bringing back.

In this latest update, the Jayhawks rank 106th in the nation by returning 67% of their production from an 0-9 campaign in 2020.

Kansas is not actually the lowest-ranked Big 12 team in this specific category, however. Texas is slated to bring back 59% of last year’s production, which is a number that puts the team at 118th in the country.

Iowa State, meanwhile, leads the Big 12 in returning production. The Cyclones have 88% of its production coming back after making it to the conference title game a year ago. They come in at No. 24 in the nation.

TCU and Kansas State are the only other teams in the league listed inside the top-70 in returning production. The Horned Frogs come in at 63rd at 77%, while the Wildcats rank 70th overall at 76%.

Oklahoma, which is the favorite to repeat as Big 12 champions, is ranked 73rd in the nation in what it is bringing back. The Sooners notably have the league's preseason pick for offensive player of the year, Spencer Rattler, under center once again.

Baylor is ranked 78th at 75%, and Texas Tech is 86th with a clip of 74%. Oklahoma State is listed at 91st by returning 73% of its production from last fall. West Virginia is just above KU, bringing back 68% of its production to rank 103rd in all of college football.

It is also worth noting that KU’s two nonconference FBS opponents are on opposite ends of this list.

Coastal Carolina comes in at 17th overall with 89% of its production coming back from an impressive season in 2020. Duke, which is slated to face KU in the last week of September, has just 57% coming back from last year to rank 120th in the country.

On offense, Kansas has its top-two passers and leading receiver returning this fall. Jalon Daniels and Miles Kendrick combined to throw all but 10 of KU’s pass attempts in 2020. Kwamie Lassiter II is back for one more season after catching 43 balls for 458 yards and two scores.

Alright, I've officially scrubbed all the rosters, and I think I'm up to date on the portal, so...

2021 RETURNING PRODUCTION RANKINGS AS OF JULY 6.

Only 14 teams below the typical national avg this year. Crazy. pic.twitter.com/nam8od5Z6V

It would seem that super seniors are the contributing factor in the difference from the past averages, and we got almost none. Still excited about the young/new guys (players and staff).

Do the numbers include defensive production or only offense?

Dale - In other articles I’ve read it includes all facets.

Given how we did last year, it might not be the worst thing to have a lot of players gone.

OTOH, losing those three players to the SEC really hurts ...

Actually Len, we don’t have a lot of players gone. We just don’t have many super-seniors that have skewed the data for this year.

How we did last year also seems to relate closely to 2 factors: 1. The previous coaching staff’s inability to find a LOT to replace the 4 year starter lost to the nfl. 2. Fielding the 2nd youngest team in the country. Fortunately, it sounds like we have a couple options at LT and general improvement across the entire OL, and the young players will continue to develop - especially with the staff changes.