Film room: A closer look at KU's struggles at o-line against Coastal Carolina 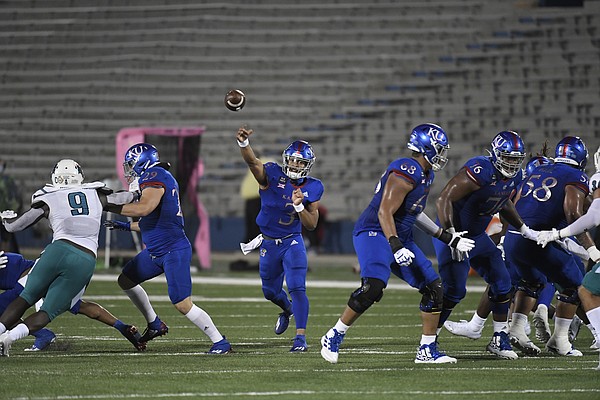 By now, you have probably seen the clip on social media. Just before a crucial fourth down attempt of KU’s 38-23 loss to Coastal Carolina, senior left tackle Malik Clark needed a moment to vomit on the turf at David Booth Kansas Memorial Stadium before eventually getting in his stance in time for the snap.

The play was successful. Miles Kendrick delivered a 14-yard touchdown strike to Andrew Parchment to end a 15-play, 89-yard drive that used up 8:12 of the clock in the third quarter. But the sequence was really emblematic of a key battle that played a part in deciding the outcome.

KU’s offensive line, which was playing its first game without former left tackle Hakeem Adeniji in five years, was completely outmatched by Coastal Carolina’s defensive line on Saturday. Even when the Jayhawks had success moving the ball — like they did in the third quarter — it took a lot out of the players up front.

As a unit, the Kansas offensive line gave up five sacks in its second consecutive loss to Coastal Carolina. The Chanticleers recorded 12 tackles for loss, which was tied for the fourth-most TFLs in a single game in CCU history and the most by the defense since 2013.

Most of the struggles were especially evident in pass protection. According to NCAA Premium Stats on Pro Football Focus, Kansas posted a pass blocking grade of 19.7 in the loss. PFF’s premium stats only go back to the start of the 2014 season, but KU’s previous worst mark in that department was a grade of 34.4 against TCU in 2017.

But even all of those statistics don’t tell the whole story. In order to better illustrate what went wrong for the Kansas offensive line, let’s break down some of the tape to see if there are issues that this unit can fix before Big 12 play.

Using what the Scouting Academy taught me this past summer, I will share my thoughts on each lineman after rewatching the game. I also went ahead and created a three-minute video using clips from the FS1 broadcast, which includes 10 bad plays and one good rep by KU in pass protection, so you can have an idea of what happened on Saturday.

Film room: A look at KU's o-line struggles in season opener by KUsports.com

Game notes: Malik Clark (LT), Jacobi Lott (LG), Adagio Lopeti (Center), Chris Hughes (RG) and Earl Bostick Jr. (RT) all started up front for KU. Api Mane mixed in at center in the first half before taking over on every possession after Lott went down with an injury at the 10:06 mark in the third quarter. Lopeti slid over to left guard when Lott was sidelined.

With that, let’s take a look at my notes on each lineman, which will also include individual numbers provided by PFF:

The second play of the game served as a sign of things to come for Clark, who was making his first start at left tackle after playing left guard over the previous two seasons.

Clark took a small lead step with his right foot at the snap in an attempt to take the inside away, but defensive end Tarron Jackson chose to test him on the edge. Jackson swiped Clark’s initial punch away and got past his outside shoulder, where running back Pooka Williams Jr. had to help. Clark then had nobody else to block.

Jackson, who was actually PFF’s highest-graded pass rusher with a mark of 92.0 last weekend, continued to expose Clark the rest of the night. Jackson had the speed to beat him to the edge, but often relied on his inside spin move when Clark got caught going too far to his left.

It wasn’t just Jackson, either. CCU took advantage of Clark in passing situations for much of the game. It was obviously supposed to be an adjustment for the 6-foot-4, 315-pound senior, but there were some glaring issues for Clark in his first try at tackle.

Clark rarely won the initial punch with a defender, and didn’t have the lateral quickness to avoid being beat on the edge. His change of direction was concerning, particularly when defenders attempted a counter move against him.

It was just one game, but some of these issues are much harder to hide for a tackle who is often in one-on-one situations with a defensive end. Based on what we saw Saturday, it wouldn't be surprising if there was at least a conversation about moving Clark back inside.

Lott’s biggest mistake during the first start of his career came on the very first play in the second period, when defensive tackle C.J. Brewer powered his way past the left guard to sack Kendrick.

On that play, Lott’s first step was left because Brewer was lined up as a 3-tech, which basically means he was to the left of Lott. Brewer immediately crossed Lott’s face, and made first contact by lowering his shoulder. Brewer eventually charged through the 'A gap' — the hole between the center and guard — and made the play on Kendrick.

The play highlighted some of Lott’s issues, as his initial hand placement was often outside the shoulders and late against most defenders. When he doesn’t have the physical strength to win a matchup, Lott needs to do a better job of keeping a solid base with his lower body.

In fact, I thought Lott did a better job anchoring after giving up initial ground on 3rd-and-4 at the 9:12 mark in the second period. His defender ended up deflecting the pass attempt, but Lott held his ground better than the rest of the o-line on that play.

There weren’t a whole lot of individual mistakes by Lopeti that were noticeable on the broadcast version. His ability to start at center and move over to guard when necessary is important for any offensive line to have.

In Lopeti’s first rep at left guard, which came at the 10:07 mark in the third quarter, Kansas actually ran behind him for a 9-yard pickup. Lopeti fired off the snap and removed Brewer from the play by staying low and having solid use of hands until the whistle.

Lopeti, who made four starts a year ago, did have to pull more often when he moved to guard. He didn’t always seem to have the speed to get out in the open field for a block, which led to some improper angles every now and then.

In the passing game, Lopeti was charged with two quarterback hurries by PFF.

Hughes was only charged with one quarterback hurry, and one of his bigger mistakes came at the 8:05 mark in the final period. He got caught sliding a bit to his right, creating a bit of a jam with the right tackle and two Coastal defenders.

The defensive player who was Hughes’ responsibility, Brewer, then had an open path to the quarterback just moments later. It forced Kendrick to roll out to his right before launching the ball out of play.

Hughes, who started at right guard for KU last year, had a lot of success in run blocking against the Chanticleers to kick off his final campaign. That could be something worth monitoring, since he graded out better as a pass blocker last year by PFF.

The former tight end made his first start on KU’s offensive line in the opener, and he will likely have better days in pass protection.

Like Clark, I thought Bostick was susceptible to getting beat off the edge by Coastal Carolina’s defensive front. Bostick was also vulnerable against inside spin moves, as he was charged with three pressures allowed in the loss.

The difference for Bostick, however, is that this might be more of a technique issue. At the 14:20 mark in the second quarter, when Jackson flew by him off the edge, Bostick messed up by standing tall at the snap and not being decisive enough with his initial steps.

Bostick’s bigger issue was on display at the 4:46 mark in the third quarter. Bostick was simply tossed to the ground by Brewer, which could be concerning when he has to go up against defenders with more functional strength than him.

Mane appeared in the first half before taking full control of the center position due to an injury early in the third quarter.

It’s tougher to find mistakes by a center on the broadcast version, but we got a good look at a miscue that led to a sack with 5:08 left in the game. Jeffrey Gunter, who was a standup defensive end on the play, came all the way around to burst through the right side of Mane for a sack on Kendrick.

It was one of the few times we saw the Chanticleers get creative to generate pressure, as most of their success came from winning one-on-one battles. In this instance, Mane probably should have come off his block a bit sooner to catch the late twist in time.

After all, having that level of mental processing is what helps a center have success in pass protection. I think Mane has it, especially since he posted the best PFF grade among KU linemen against Coastal.

Before getting to my final thoughts, I wanted to take this time to acknowledge that PFF's grading system essentially comes down to whether a lineman won or lost a rep on any given play. Most plays end up being graded neutral by the PFF staff.

This podcast mentions that PFF isn't putting as much emphasis on technique by a lineman, at least compared to winning or losing a rep, which could occasionally lead to some differing opinions between tape evaluators and the grading system.

The numbers and film might be scary, but it’s probably not time for KU fans to panic just yet. Because of the pandemic, this is a unit that didn’t get as much time together in the offseason as they would have liked, and it does take several reps for an offensive line to truly come together.

I do think a majority of these issues are correctable for each lineman. This unit also had a lot of success in the run game, which could be another film breakdown down the road since I still have plenty of those clips that didn't make the cut for this blog.

The problem for Kansas is that it won’t get any easier, of course. After a bye this weekend, the Jayhawks will now have to square off with faster and stronger defensive lines in the Big 12. But it still wouldn’t surprise me if better days are ahead for KU’s o-line.

I sure hope better days are ahead for the o-line. If they continue as they did the first game there is no way we have any chance at all at a B12 victory.

As I mentioned after the game, KU looked like they didn't know the plays. Bad footwork, bad hand placement, not really knowing which way to block the CC defense which was just speeding by KU. I was somewhat surprised because HC Miles is known as a Offensive LIne coach. But I was even more surprised with Costal Carolina's speed on defense compared to KU's OL. By now KU has 3 star athlete's at every position so KU should be more than as fast and as talented than CC by now and the point is....."we got out coached" and KU players are responsbile for not preparing themselves. CC players were better prepared, better developed, and faster in their decisions and physicality.

“We got out coached”, but that’s “a player responsibility”?

It’s interesting that those individual grades equate to such a low overall grade.

The challenge with moving Malik back inside, where he probably belongs, is still needing a L-OT. Unfortunately, it appears that maybe there isn’t a better option post-Hakeem. Maybe one of the places the lack of practices hurts the most.