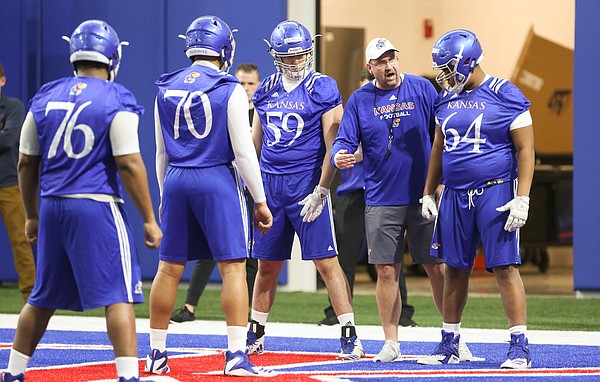 In his first season in Lawrence, Meadows has multiple players that will make an impact on the offensive line. It is the main reason why he plans to rotate guys this fall. Meadows even has plenty to like about some of reserve options as well.

During KU’s media day, Meadows provided insight on many members of the offensive line during an interview with the Lawrence Journal-World. Based off his comments, it also helped shed some light on a likely depth chart for the position with less than two weeks until the season opener against Indiana State.

With that, let’s look at the likely pecking order for the guys up front with some information from Meadows at each position:

Nothing to see here on the starting unit, as Adeniji has started all 36 games of his first three years. Meadows mentioned taking 10 reps per game off Adeniji as part of his rotation plan, and Bostick appears primed to fill that role.

“Earl is going to be a freak,” Meadows said. “I don't know if I have coached a guy that's got the skills that he has. He's only played offensive line since April and he's doing some stuff. It is unbelievable.”

The starting spot at left guard seems solidified for the Jayhawks. Clark started in 11 of the 12 games as a sophomore, and has made strides this offseason.

“Malik Clark has taken his game to a different level than what he was in the spring,” Meadows said. “Been really coachable, really fun to be around.”

Lott, who missed all of last year after leaving the team’s practice fields in an ambulance during preseason camp, is currently in line to serve as Clark’s backup.

“Jacobi Lott is going to be a really good football player and he knows what he has to work on,” Meadows said. “They are all fixable things, and he will go and get it all right.”

The Jayhawks plan to employ both Mane and Tovi at the starting center spot. Meadows won’t pull either guy out in the middle of a series, but he expects both to play significant snaps for KU this season. Gilbertson is the reserve option, though sophomore Jack Williams could be in the mix in the future.

“Joey is going to be a good football player, and he's only a sophomore. So we are in pretty good shape,” Meadows said. “The guy that never gets any reps is Jack Williams, a kid that walked on from Texas, and I love Jack too.”

Based off Meadows’ comments, the right guard competition is anything but over. Hughes appeared in all 12 games last year, while Lopeti redshirted.

“Chris Hughes is going to be a really good football player, I'm trying to get more out of him,” Meadows said. “To Adagio Lopeti's credit, he's had a really good fall camp. I gave him some reps with the 1s, and he hasn't disappointed. He's a kid that I wasn't sure about when I got here. He's changed my mind really fast.”

It sounds like it is a three-person race for the right tackle spot. Last season, Feder started all 12 games in his first year with Kansas. Both McCauley and Frazier appeared in all 12 games in some capacity in 2018.

“At right tackle, we are repping three guys. Someone has to stand out there,” Meadows said. “I can say right now, Clyde is probably a little bit closer. All three of them have gotten better.”

Behind that trio is redshirt freshman Nick Williams, who is from Overland, Missouri. While Williams might not have an impact this fall, it is clear that he is a part of Meadows’ plan down the road.

“He's going to be a guy,” Meadows said. “We are expecting him to play next year and he has all the ability to do so. He loves football, he's my type of guy."