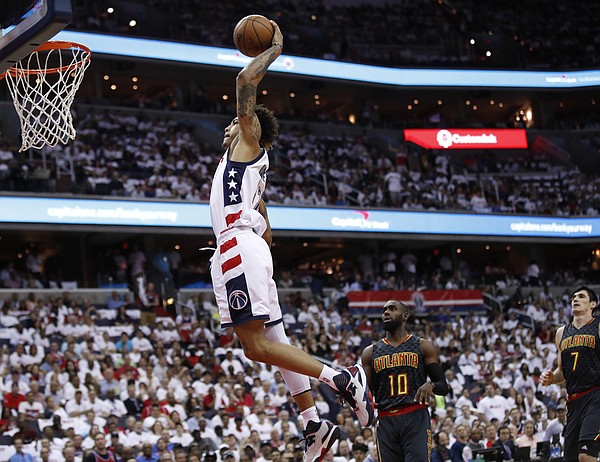 Suspended for Game 4 of his team’s second-round playoff game on Sunday, Washington forward Kelly Oubre Jr. had to watch from afar — at his home, with his father — while his teammates handled Boston without him.

The former Kansas wing’s Game 3 run-and-shove retaliation on pesky Celtics screener Kelly Olynyk earned him a flagrant 2 foul, an ejection and a seat next to Kelly Oubre Sr., due to the NBA’s decision to suspend him.

The 21-year-old, second-year pro told CSN Mid-Atlantic his natural inclination was to enjoy viewing what turned out to be a 121-102 Wizards blowout. Good old dad had to keep junior in line when a big play had him “going crazy.”

"He wasn't in a bad mood,” Oubre Jr. said of senior, “but he would just constantly remind me if I was joking about something, he would be like, 'It would be easier if you said that on the court.' But that's my dad. That's my dad for you. It's tough love and I love it."

The 6-foot-7 backup forward will be a much more active participant in Game 5 of the Boston-Washington series, tied 2-2, on Wednesday night. Oubre anticipates Celtics fans not being as excited about his return as he is. During Game 4, in D.C., Wizards supporters, who also relentlessly booed Olynyk, chanted Oubre’s name during one dead stretch. Wisely, he’s expecting the opposite response from fans in Boston for his return.

"If a whole stadium full of people are chanting my name, that's a blessing,” Oubre told CSN Mid-Atlantic. “I see what we did to Kelly Olynyk, so I'm not going to be surprised by anything."

"I've played in all the loudest arenas and against a lot of the best fans," Oubre added. "I just have to stay focused and lock in."

His coach, Scott Brooks, had some advice for Oubre, who scored 12 points apiece in his first two games at Boston this series:

"Oh jeez. Bring some ear plugs,” Brooks said. "They're definitely gonna let him have it."

"Man, I feel like we all should bring ear plugs. But if you ain't booing then you ain't doing something right, then. That's how I look at it."

As it turns out, Oubre said his time at Kansas prepared him for what awaits him in Boston.

"I went to Kansas University," he told Washington Post reporter Candace Buckner Wednesday, "so I'm used to all the booing."

Oubre identified a certain Big 12 arena in Manhattan as one place where he heard plenty of boos.

"Kansas State is the worst," he said. "They've got a whole student section that hates your guts."

"Shoutout to Kansas State, but rock chalk, man," he added.

Last time he was focus of fans' hate? College.

Oubre: "I went to Kansas University so I’m pretty much used to all the booing..."

Oubre on the worst place he heard boos in the Big 12.

"Kansas State is the worst. They’ve got a whole student section that hates your guts"

"They want you dead. Shout out to Kansas State but Rock Chalk, man."