Former Kansas University forward Perry Ellis, who still is less than a month removed from being the face of the KU basketball program, teamed with the popular web site The Players' Tribune to pen a farewell letter to Jayhawk fans everywhere.

The letter, titled "Thank You, Kansas," takes Jayhawk fans on a journey all the way back to Ellis' freshman year and before, with pictures from his days as a young baller and tales of his childhood in Wichita.

Some of it you've heard before, but even if you have it's one final look at what being a Jayhawk meant to Ellis.

Dubbed "a new media company that provides athletes with a platform to connect directly with their fans, in their own words," The Players' Tribune has taken the sports world by storm, with letters, flashbacks, inside stories and memorable moments from some of the world's best known athletes.

Fellow former KU great Paul Pierce already has been featured on the site 11 times, including this look back at the heartbreaking loss to Arizona during the 1997 NCAA Tournament. 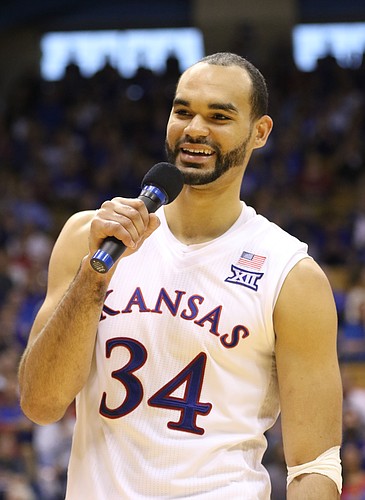 The sure sign of a true Jayhawk is when they refer to it as the "University of Kansas". Well done, Perry! Can't wait to see that jersey in the rafters!

With Ellis leaving after 4 great years, the debate will linger on about hanging his jersey. I suspect for most Kansas fans, had we gone to the Final Four this past year, the decision would be a slam dunk emphatic 'YES.' If I had a vote, I'd still vote 'yes' since he finished with 4 Big 12 Titles, Top 10 scorer and top 12 rebounding...in addition to his earning All-Big 12 two years in a row, consensus All-American this year and an academic record that brings worthiness to the meaning of the idea of "Student-Athlete."

Note to Bill Self....Hang 'Em High....get that number 34, which represents the greatest player ever to come out of Kansas, up there where is belongs.

Although you're usually not, I hope you're wrong here. I hope there's no debate.

You may be right Dale. That's why they say that they retire the jersey and not the number.

Anyway, I still think that Perry's qualifications are a slam dunk, and like everyone else, I look forward to seeing his jersey from the rafters.

Since you brought up the subject Suzi, who do you think are the five best KU players to come out of Kansas, assuming you exclude someone like Danny Manning who we can claim but who is really a native North Carolinian? I guess my five would be Perry Ellis, Darnell Valentine, Calvin Thompson, and perhaps two from the Phog Allen era, Howard Engelman, and B. H. Born (?, is he a Kansan, Mick?). I'm ready to stand corrected for any obvious names that I have missed.

The three you mentioned, sans Manning, were the first to come to my mind (Ellis, Valentine, Thompson). Wayne Simien would be on there. Calling Ellis the greatest of all the Kansas born player might be a bit of emotional hyperbole on my part due to the recentness of his play. Valentine certainly has a strong, strong claim to that top spot.

For non University of Kansas, Kansas players, Lucius Allen would have to be on the list of top 5. Buddy Hield would have a case.

Clyde is from Indiana.

I 100% agree that Perry Should have his Jersey Retired. this guy has been a complete icon of consistency throughout his 4 years and hes done it with nothing but class. A great example of what a student athlete should be. As far as the #34 being retired Im alittle bit biased due to the fact that Paul Pierce was my personal favorite Jayhawk of all time. Hes definitely not the greatest but i just loved his game!! But regardless of the decision they make Perry above all deserves recognition BIG TIME!!!

Really cool of Perry to take the time and effort to put the letter together.

To some, Perry's shy nature may have come across as him being aloof. I hope this letter puts that notion to bed.

I don't know if Perry should have his jersey retired, but he certainly deserves to go down as one of the all-time greats.

Great quote from the letter:

But all of the outside input was meaningless. I knew what school was right for me. I’d known since the first time I stepped on campus. I was born to be a Jayhawk.

Loved watching you play Perry, you'll always be Jayhawk. Good luck in your pro basketball ventures and hopefully in a few years we'll see you back in the Phog, this time in a suit and tie. Coach Ellis has a nice ring to it.

Perry is pure class. He will always be one of my favorite players. Such a great young man.

Mr. Perry Ellis! You are the standard at which all young men should follow. Faith(x) Family(x) A Care and love for strangers(x) Amazing Student(x) One of the all-time greats to wear a Kansas uniform(x)

My favorite quote > Now I was playing for something bigger than myself. I was playing for the kid who was sitting with his dad in the stands, hoping to one day be in my shoes. I was representing Kansas. This was my state. These were my people.

Now folks this is good stuff!!

Perry is such a class act! I enjoyed all 4 of the years he played. I will truly miss him! Funny, his being so quiet and humble, I'm sure we would all agree that during some games we would be thinking "Perry's not doing so well tonight" and then at the end of the game would find out he scored 20+ points. He did it so quietly that you could miss it! LOL Good luck Perry! We wish nothing but the best for you in the future. You always have a place to come home to in Lawrence!

Oh, Suzi, how embarrassing that I left out Wayne Simien. He definitely is on the list, and I'll have to expand my number to 6 since I refuse to remove any names from my list. They all were/are great players, and better yet, great ambassadors for KU.

Your one word response, Brett, is priceless. I award you the prize if there is one.

P. S., per Wikipedia, B. H. Born was born (how about that) on June 6, 1932, in Osawotamie, Kansas. Therefore, he clearly is on my list as he was, I believe, the Most Outstanding player in the 1953 National Championship tournament the year after the late Clyde Lovellette and the Hawks won the National Championship as well as the Olympic Games.

With all due respect, Clara, Max' situation is a very special one and is certainly worthy in its own right. His 60+ years of loyalty and service to KU are unparalleled. Although Bob Davis' tenure certainly wasn't that long, I hope that the same honor is bestowed on him at some point.

I think we all are in agreement that Perry's jersey should be there, and I imagine that it will be very soon.

Fabulous letter from a true star, on and off the court. We will miss watching you play collegiate ball but hope you get pro opportunities. Thank you for your hard work and dedication to the Jayhawks; congratulations for your many accomplishments and well deserved honors. Can't wait to see your jersey hanging in AFH. Rock Chalk.

It's great when you have good players on your team. It's even better when they're great people. It's better still when they're home grown. Perry Ellis is a great talent and an amazing human being. Gonna miss him.

Amen, Joe. Also, regardless of what one other individual seems to want to say, you don't get under my skin. I am certain that you know that. It's people with personality disorders who do, notwithstanding his offer to wash my car or mow my lawn.

Thanks Harlan. I do know that. Our respect has been mutual whether we have agreed on issues or not. And try not to worry for me too much. To the extent that I am silent, I am for a purpose. But a reckoning is on the horizon.

Are you working on the self control to avoid making comments that are factually dishonest? Are you training yourself to admit the inaccuracy of these comments when they're politely pointed out instead of lashing out with childish insults?

I "reckon" that would be huge personal growth for you Joe. I'm cheering for you.

You always seem to take the high road, Joe. Wish I could remain silent when it is appropriate. My wife tells me that I always have to get the last word. Oops, I guess she is right although that wasn't my intent in this final response on this subject.

Ellis reminds me so much of Simien. Hopefully his NBA career is longer. Regardless of his path I'm sure he'll find ways to be fulfilled.