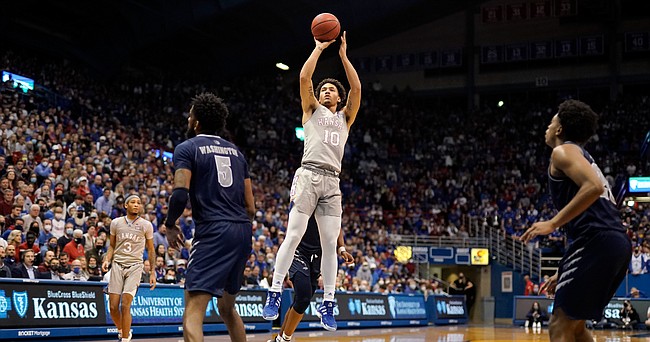 Kansas forward Jalen Wilson (10) pulls up for a jumper against Nevada during the second half on Wednesday, Dec. 29, 2021 at Allen Fieldhouse.

Wilson, who flirted with turning pro but elected to return to school for the second season in a row, was one of six players on the Big 12’s first team.

He becomes the 38th Jayhawk to earn preseason all-Big 12 honors and KU now has had at least one player on the preseason all-conference team in all but two of the 27 seasons the Big 12 has existed.

The league’s coaches voted for the team and they were not allowed to vote for their own players.

Both players are expected to start for the Jayhawks during the upcoming season, but Wilson has the biggest path toward stardom.

After playing a key role on each of the past two KU teams, Wilson returns for his redshirt junior season as the Jayhawks’ top returning scorer and rebounder from the national title team.

The Denton, Texas, forward averaged 11.1 points and 7.4 rebounds per game last season and was a couple of rebounds shy of averaging a double-double throughout the NCAA Tournament.

After earning his way into an NBA combine invitation through his play at the pre-draft G League camp, Wilson took in the feedback and elected to return to KU for another run with the Jayhawks.

He said then that helping teach the young guys and newcomers the Kansas way was important to him, and he was also eager to take on a bigger role for Bill Self’s squad both as a player and a leader.

“I really want to focus this year on communicating, being a good leader, because the next class is always going to learn from the older guys,” Wilson said this summer when talking about his return. “I just want to be the best example I can be.”

That approach figures to increase his opportunities on the court, as well. Wilson has worked hard on his outside shot this offseason and he said during a recent day-in-the-life video shot by Kansas Athletics, that his main goal was to make everything about his jump shot automatic.

“That’s all I’ve been working on now,” he said. “Just having the same shot, same rhythm, same flow and doing it every day. Being consistent is the thing that I’ve seen that’s helped me the most.”

Wilson was one of three players who were unanimous selections to the 2022-23 all-Big 12 preseason team. Baylor’s Adam Flagler and TCU’s Mike Miles Jr. were the others.

Oklahoma State guard Avery Anderson III and Texas Longhorns Timmy Allen and Marcus Carr rounded out this year’s team. There were six players on the five-man squad because of a tie in the voting.

Absolutely. Those 3 steals in the second half were huge. Juan "the theif" should be getting his props.

A fun aspect of college basketball is seeing the players that will come out of nowhere to be all conference players at the end of the year. If memory serves, Remy was pre-season conference player of the year and while everyone knew Ochai was good no one was predicting he was lottery good.

Wilson will be getting tons of touches and should be 1st team at the end of the year, but KU always has a 2nd player that's top 15 in the league. Exciting to find out who it'll be!

3 from Texas and 3 from Baylor, but I doubt they will be at the top of the Big 12 at the end of the season.

Wilson is a tough matchup and can go from 1-4 in defense very effectively, that is why he is an outstanding college player.

Hopefully Wilson picked up a thing or two from the combine. I don't care about preseason cr@p, but he has to prove he's better at scoring/shooting, not only good at rebounding. And I expect him to dunk at least 1 per game!