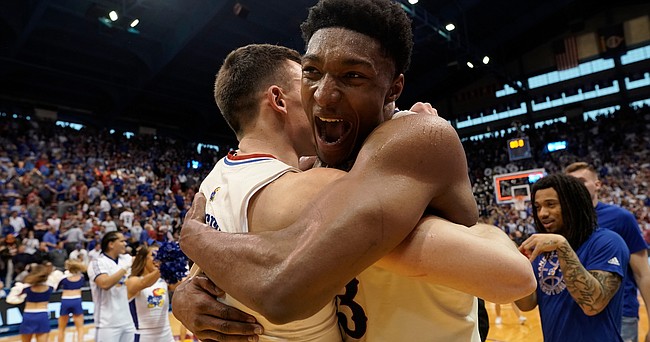 Kansas forward David McCormack (33) wraps his arms around fellow senior Mitch Lightfoot (44) following the Jayhawks' 70-63, overtime win against Texas on Saturday, March 5, 2022 at Allen Fieldhouse. The Jayhawks defeated the Longhorns to win a share of the Big 12 conference title.

Kansas basketball coach Bill Self said Tuesday that he had “no concerns right now” about the health of KU forwards Mitch Lightfoot and David McCormack as the Jayhawks prepare to head to New Orleans for this weekend’s Final Four.

Both players have battled injuries throughout the past few weeks, with McCormack trying to manage foot soreness that has been with him throughout the year and Lightfoot fighting back from a knee sprain that he suffered during the Big 12 tournament.

Lightfoot, who has firmly fallen into the role of the first big man off the bench, said on Tuesday that his left knee felt fine and that he was hoping to play his best basketball of the season this week.

“I’ve been working on it,” Lightfoot said. “Against Miami was the first time I really didn’t think about it. I forgot about it during the game. So that’s kind of nice, getting over that.”

Lightfoot has worn a brace on his left leg throughout the NCAA Tournament that has allowed him to play in all four games of KU’s run thus far.

By far his best came in the win over Miami last Sunday, when he scored nine points and grabbed three rebounds in 17 minutes. Lightfoot also recorded four blocks in 16 minutes in a Sweet 16 win over Providence.

Being able to produce at that level again so quickly after the injury was a welcome sight for Lightfoot, who said he was fearful of the injury when it occurred in Kansas City, Missouri, five days before the start of his final NCAA Tournament.

“I think whenever anything like that happens you have those thoughts,” he said Tuesday. “But I had confidence in our medical staff. They’re the best of the best. And I wasn't really too worried after we got back to the locker room. They explained it to me. I'm not a doctor. So, to have some doctors telling me that I'm OK and I’m going to be all right was good.”

McCormack’s injury has been more of the nagging variety, making his ability to get loose and stay loose critical to his performance.

Self said Tuesday that he thought, going into the season, that McCormack would “the key player” for Kansas. And even though others have stepped up to take bigger roles, he still believes McCormack and senior guard Remy Martin

“When they play at a high level it totally changes our team,” Self said. “Because the others have been pretty consistent. David’s the one guy who can come away with 15 (points) and 10 (rebounds) and not have to be his best because he has a natural knack for putting the ball in the basket when he catches it in tight.

“We need David to play well. There’s no question about that. I wish his health allowed him to play more free and more healthy for an entire season. But I do think he’s feeling as well as he has all year long and we certainly need him to be big on Saturday.”

McCormack is KU’s third-leading scorer at 10.1 points per game. He also ranks second to Jalen Wilson in rebounding at 6.8 boards per game and is tied for second with 32 blocks, one swat behind Lightfoot’s 33.

Meanwhile, Lightfoot, who moved into the top 10 on KU’s all-time blocks list this season, is averaging 4.7 points and 2.8 rebounds in just 12.3 minutes per game.

“I think Dave and Mitch, combined, have been a terrific 5 man for us over the course of the last month,” Self said Tuesday.

Kansas' Bill Self speaks on facing Villanova in the Final Four by KUsports.com

Kansas' Mitch Lightfoot on returning to the Final Four and facing Villanova by KUsports.com