Here’s what Villanova’s missing without injured guard Justin Moore, along with how they plan to replace him 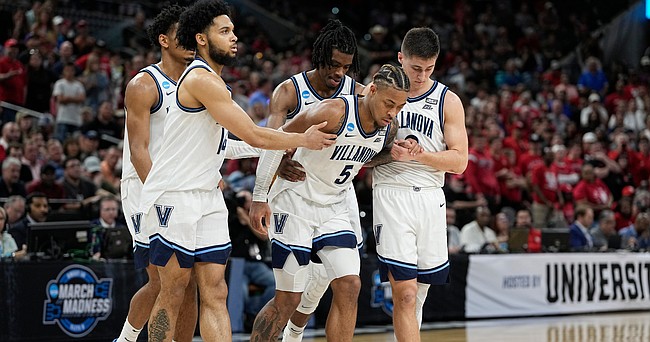 Villanova guard Justin Moore (5) is helped off the floor during the second half of a college basketball game against Houston in the Elite Eight round of the NCAA tournament on Saturday, March 26, 2022, in San Antonio. (AP Photo/David J. Phillip)

Villanova coach Jay Wright said Monday that injured guard Justin Moore had surgery over the weekend to repair a torn Achilles tendon that will keep him out of Saturday’s Final Four matchup with Kansas.

Moore, who leads the Wildcats in minutes played, suffered the injury in the final minute of Villanova’s Elite Eight victory over Houston.

During a Zoom press conference previewing his team’s upcoming trip to New Orleans, Wright opened with a little about Moore and his impact on the team.

“I want to try to address early in the week just what an incredible player Justin is and how unique he is in our program,” Wright began. “He’s one of the best rebounding guards in the country. He plays every position for us, offensively, except 5, and he’s a leader out there. He’s probably our most valuable player. I think he’s underrated in terms of his value to this team and what he’s done this year. He’s one of the most complete players in the country. He truly is.”

A junior from Fort Washington, Maryland, Moore was the Wildcats’ second leading scorer in 36 games this season. He averaged 14.8 points per game and played a team-high 34.5 minutes per game.

That only scratches the surface for what type of player Villanova will be without.

Moore also ranked second in assists, with 81, third in rebounding at 4.8 boards per game, and third in steals at 35.

He attempted the most shots of any player on the roster (456) and hit 80 3-pointers this season while shooting 36% from 3-point range. He scored in double figures in 28 of his 36 games, hitting for 18 points or better in 10 of those.

He also was a 75% free throw shooter and ranked third on the team with 14 blocks.

The absence of all of that leaves a sizable hole in the Wildcats’ lineup, but Wright said his group, though devastated for Moore, was ready to push forward.

“It’s a team,” he said. “And you have other guys that just don’t get the opportunity because he’s playing the most minutes because he’s great. Other guys can step up and we can be a good team without him.”

Wright said Monday that he wanted to open his first Final Four press conference by celebrating Moore’s contributions to Villanova getting this far simply because he did not want to see the 6-foot-4, 210-pound guard get overlooked this week.

At the same time, Wright said he felt it was important to address it head on because he did not want to undervalue what Moore meant to the team by talking about how they will move on without him.

“All of our guys that come off the bench will be given more minutes,” Wright said. “Even Eric Dixon, who starts, will play more minutes. It’s opportunities for them.”

Kansas and Villanova are slated to square off at 5:09 p.m. Saturday at the Caesars Superdome in the first of two national semifinals that day. Duke and North Carolina will play the late game and the winners will meet Monday night for the national championship.