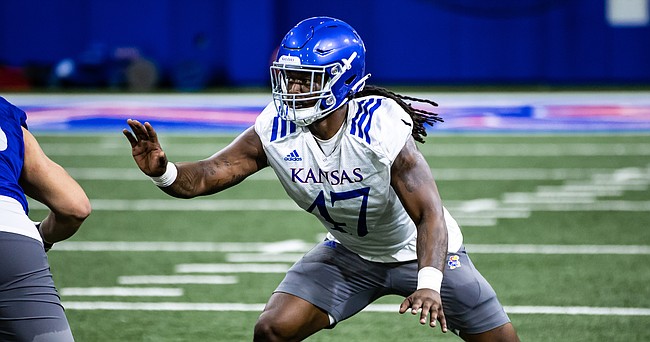 Lonnie Phelps Jr. can recall the exact moment when he felt at home at Kansas.

It was January, not more than a week into the spring semester, when the defensive end was recognized on campus. The fans didn't just know Phelps plays football. They knew his full name and that he had just joined the Jayhawks following a transfer from Miami (Ohio).

"That was just abnormal for me because when I was at Miami, I didn't get that type of attention from fans," Phelps said. "It was people that I didn't expect to know me that knew my full name, so that was cool right there."

If all goes well for Phelps, many more people will know his name — and soon.

A redshirt junior, Phelps is the Jayhawks' marquee addition to the defensive line, a player whose 9.5 sacks last season ranked third in the MAC and tied for 22nd in the FBS.

No player who entered the transfer portal had more sacks than Phelps, making him, in one aspect, the most proven pass rusher to change schools after last season.

Nearly immediately, he knew he wanted to play at Kansas. Phelps, who decided he wanted to leave Miami at midseason, received a scholarship offer from the Jayhawks on Dec. 24, hours after his transfer request was processed.

"I felt like it was the perfect fit," Phelps said. "I've never been this far from home, so it was a lot to adapt to, but my mom said I could do it because where I'm from, I'm a product of my environment and I can adapt to anything if I put my mind to it."

Kansas knew it needed to find a way to replace Kyron Johnson, who had a team-high 5.5 sacks last season and was chosen by the Philadelphia Eagles in the sixth round of the NFL Draft in May. The Jayhawks combined for just 15 sacks, which not only them with TCU for the fewest in the Big 12 but ranked 120th out of 130 schools in the FBS.

Phelps, who is 6-foot-3 and 245 pounds, said he has watched some of Johnson's highlights from last season to understand what's being asked of him. Coach Lance Leipold said what will be expected from Phelps, however, will be different from what Johnson could do.

"We know what Kyron gave us last year, but we also have to be honest: He was undersized and really played his tail off in tough situations," Leipold said. "Lonnie gives us a little more size there and he's going to be good against the run as well. I like that about him. He mixes things up. He works at it. He takes coaching, all those things. It's exciting."

Phelps emerged last season after playing in all three of Miami's games in 2020, a season shortened by the start of the coronavirus pandemic, and 13 games as a true freshman the year before, when he finished third on the team with 4.5 sacks.

He said his success rushing the passer is a culmination of his speed, power and aggression, and that he tries to pattern his style of play after the Watt brothers. Leipold, meanwhile, said Phelps "has a tenacity about him that he keeps going and he fights and scraps and plays to the whistle."

"Lonnie is a freak of nature," senior safety Kenny Logan Jr. said. "Lonnie can swing the edge. Lonnie has a high motor. Lonnie goes and goes and goes, and he's strong, so Lonnie's going to be a great help for us."

Yet the most is being expected from Phelps, whose passion for the game came from his father, Lonnie Phelps Sr. Although the elder Phelps didn't play football, he has helped train his son by studying clips on YouTube and used to record Miami's games in order to provide feedback.

Recently, when Phelps was issued his No. 47 game jerseys, the nameplates merely showed his last name. He wants to have "Jr." appended to it, like he did at Miami, in order to recognize his father and to remind himself why he's now at Kansas.

"It was just football at Miami," Phelps said. "Now, it's everybody."

It is simple, KU's 2022 defensive line needs to improve substantially in stopping the run and in getting much more pressure on the quarterbacks. Last year opposing QB’s had "all day" to pick the Jayhawk’s secondary apart. One can only hope that Mr. Phelps (and others) can bring improved athleticism to the defensive front. I still think Malcom Lee can be one of the best on the defensive line. I listened to coach Leipold last night and he assured the throngs of KU fans hoping for change that the talent level is improved and that the team would be competitive. We can only revel in the Texas road win for so long – KU still finished 2-10 and success is measure by wins and losses. As pointed out by a Texas fan on social media to the fact that it has been 1,027 days since Texas has defeated KU in football; it has been 5,031 days since KU won 6 games in a single season. An 1-11 or 2-10 season, even though the schedule on paper looks more challenging than last season, should be viewed as unacceptable. Rock Chalk.

Lonnie is a bigger version of Kyron so hopefully he can create as much or more pressure on the QBs as well as be more effective against the run.

There was also an article about one of the DTs that was pressed into action even though he was no where near Big12 DT playing weight. I think he put on something like 50# during the offseason. That will go a long way towards stopping the run. Having 6-DTs should as well.

There appears to be so much improvement across the board on the D in particular and not just the 1’s, but a quality 2-deep as well.

I think we’ll be surprising folks. Wouldn’t it be fun if we got to 6 Ws before ut beat us?

As I recall Lonnie is from the Cincinnati area and last year he was named second team ALL MAC at Miami of Ohio located in nearby Oxford.

It is interesting that Phelps patterns his play after JJ and TJ Watt. As we all know, Watt is a measure of electrical power and it sounds like Lonnie brings great energy to the field. Edge rushers are in high demand in modern day football.

And for a bit of trivia, the greatest KU player named Phelps was Edwin in the 1930's. Ed Phelps was an All 6 Lineman, who graduated in Engineering, and later advanced to President of Peabody Coal Company.