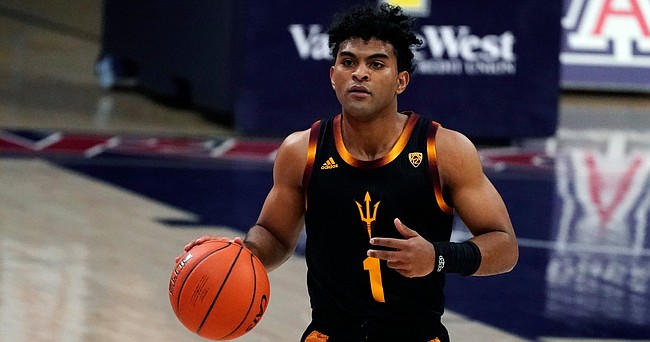 Arizona State guard Remy Martin (1) during the first half of an NCAA college basketball game against Arizona, Monday, Jan. 25, 2021, in Tucson, Ariz.

That allowed Kansas coach Bill Self to share his thoughts on the two most recent commitments, veteran guards who bring a combined 251 games of college basketball experience, including 185 starts.

Martin, a two-time first team all-Pac 12 performer during his four seasons at Arizona State, is both the biggest signing and the biggest question mark of KU’s 2021 recruiting class.

Like potential Kansas teammates Ochai Agbaji and Jalen Wilson, Martin has entered his name into the NBA draft pool and is currently going through the process of gathering feedback about where he stands ahead of the 2021 NBA draft.

If he likes what he hears, the 6-foot, 175-pound Martin may consider keeping his name in the draft pool. If not, he has shared plenty of enthusiasm over the opportunity to come to Kansas for his super senior season.

Self and the KU coaching staff are equally excited about the idea of bringing Martin on board.

“We believe Remy to be one of the best lead guards in America,” Self said in a statement announcing Martin’s official addition to the roster. “We watched him up close play back-to-back years when he led the Sun Devils to victories over us, both in Allen Fieldhouse and in Tempe. He has declared and is preparing for the NBA draft, but we know if the decision is made to return to school, we will welcome his talent and experience.”

In 118 games and 83 starts at ASU, the guard who was named the Pac-12’s Sixth Man of the Year as a freshman brings a style that Self likes his guards to have.

“His competitiveness will elevate others overnight,” Self said. “He would be a very high-energy leader on our team and within this campus.”

Martin, who has until July 7 to pull his name out of NBA draft consideration, would come to Kansas with 1,754 career points, 466 all-time assists, 151 career steals and 176 3-point field goals made. He earned his sociology degree from Arizona State in 2020. 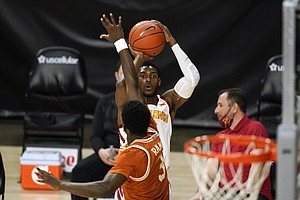 At age 24, and set to start his seventh season of college basketball, Coleman-Lands brings even more game and starting experience, though not quite at the same level as Martin.

The Indianapolis native logged 102 starts in 133 career games at Illinois (2 years), DePaul (3 years) and Iowa State (1 year). After redshirting the 2017-18 season following a transfer to DePaul, the former top-40 prep prospect had a medical redshirt in 2018-19 after getting injured. He started all 41 games he played at DePaul and then started 22 of 23 games with the Cyclones last year.

That included two games against KU, in which he scored 20 points in each.

“I’m not even (just) talking about Remy’s maturity, because Jalen is two years older than Remy,” Self said in the news release. “Jalen is a college graduate who is pursuing his master’s degree. He’s very bright and can really shoot the basketball.”

Self said the veteran guard, who stands 6-4, 190 pounds, would add “great shooting depth on the perimeter.”

“That is something we needed last year,” Self added. “And we are addressing that, which he is a big part of.”

Self said Coleman-Lands’ age and college experience could be huge for the new-look 2021-22 KU roster.

“Not since Brady Morningstar have I coached a young man that is 24-years-old and will graduate at 25,” Self said. “But I think that maturity and experience will bode well with so many newcomers next season.”

With junior college big man Sydney Curry reopening his recruitment on Wednesday, the additions of Martin and Coleman-Lands bring KU to 13 scholarship players heading into the summer.

Should Agbaji, Wilson or Martin elect to remain in the draft, KU then would have another scholarship to hand out. But if all three choose to stay in school, KU’s roster would be set.

Will Yesufu be a sophomore? Junior?

I believe Yesufu will be a sophomore.