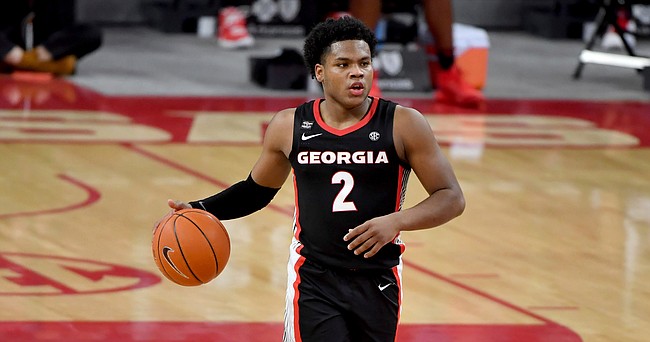 Georgia's Sahvir Wheeler (2) against Arkansas during the first half of an NCAA college basketball game Saturday, Jan. 9, 2021, in Fayetteville, Ark.

The Kansas men’s basketball program made the cut for Georgia point guard Sahvir Wheeler, a sophomore transfer who released his four finalists on Friday morning.

Wheeler, a 5-foot-10, 180-pound lead guard who averaged 14 points per game for the Bulldogs last season, is down to Kansas, Kentucky, LSU and Oklahoma State.

He announced his four finalists on social media Friday morning via a 10-minute video of him and his father, Teddy Wheeler, breaking down game film of each of his finalists.

In the video, you see the faces of the Wheeler, a native of Harlem, N.Y., and his father sitting on the couch and the back of the laptop they’re watching.

They spend a couple of minutes on each school and discuss style of play, the head coach, the fit and the opportunities that might come from picking that program.

While the Wheeler announcement is the latest in a long line of made-for-social-media recruiting videos, it’s different than most that have come before it in that it provides raw insight into the thinking that helped the player his decision.

“This is a sneak peek into my process of breaking down each of the four schools,” Wheeler wrote on Twitter and Instagram. “Hope you guys enjoy!”

No timeline was given for Wheeler to make his final choice, and he told Adam Zagoria, of Zagsblog.com, that he also was testing his NBA draft stock.

“Each of these schools I feel like give me an opportunity and a chance to win at the highest level and be able to compete at the highest level for a national championship, Final Four run,” he told Zagoria. “(They) also allow me to elevate my game and get to the next level because there’s a direct correlation between getting to the NBA and playing in the March Madness, having a winning record and placing at the top of your league. And I feel like those schools give me an opportunity to do that and also play my game and grow consistently as a player.”

Kansas currently has one scholarship to give out and is awaiting draft decisions from 2020-21 starters Ochai Agbaji and Jalen Wilson.

This is a sneak peek into my process of breaking down each of the four schools. Hope you guys enjoy! 🤞🏾 #ChasinGhosts #KUbball #BootUp #BBN #GoPokes

I think he would have a great college career at KU. I prefer Wheeler over the "other" PG considering our program.

Interesting that the list includes OSU considering his criteria and coming from Georgia.

His highlight video said he is 5'8", so even shorter than 5'10". I prefer taller guards as well - they can block shots as well as shoot over smaller defenders. Ty-Ty also has a higher rating from the various ranking services (take that as you will). KU will be loaded even if we miss on both these guards.

why in god's name would we want to put another guard, and a sub-6'one, on the roster. craziness...

i guess just to add another tough, physical guard to the scout team, and then have him transfer out next year to open the scholarship up for someone who's at least taller than me... I know, Collins and Mason, i get it they were gems...

Glad to see Muscadin find a landing spot . New Mexico is his new home . Hes the 3rd Jayhawk since 2006 to transfer there others being J.R.Giddings , Carlton Bragg and now Muscadin .Self said Muscadin became a terrific practice player and over time would be a great player .....for New Mexico . All the best for Gethro

This one is very unlikely. I predict Oklahoma St.

Give me TyTy with his height and length! He would be an elite defender and make us an even more elite defensive team! He is a great shooter and will go to the basket and dunk on people