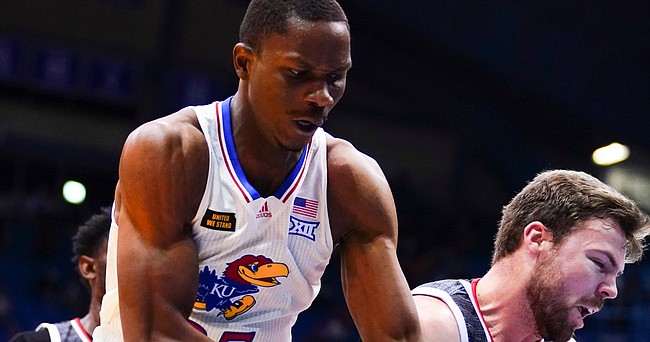 For the third consecutive day, a member of the 2020-21 Kansas men’s basketball team added his name to the transfer portal on Wednesday.

Freshman forward Gethro Muscadin becomes the latest Jayhawk to decide to head elsewhere, joining wings Tyon Grant-Foster and Tristan Enaruna who put their names in the portal earlier this week.

“We recruited Gethro to come in and be a contributor for us over time,” Kansas coach Bill Self said in announcing Muscadin’s decision to leave on Wednesday. “He certainly got better daily during practice and was a terrific practice player. With the rules being such, with guys getting the year back, Gethro sees it’s in his best interest to look into some other opportunities and we totally support and agree with that decision.”

Muscadin’s departure opens up another spot for Self and company to fill.

A native of Haiti who played prep ball at Aspire Academy in Kentucky, the 6-foot-10, 220-pound Muscadin appeared in 10 games for the Jayhawks this season, scoring two points and grabbing nine rebounds.

Although he was never expected to be a part of the Jayhawks’ rotation as a freshman, Self said Muscadin’s future remained bright.

“If he continues to progress, gets stronger and keeps his athletic ability like it is now, he’s going to be a really good player,” Self said. “We certainly wish him the very best and know that he will be successful and he knows that we’ll always cheer for him.”

I do not mean this to sound cruel and I wish him nothing but the best, but I swear to God that I thought he was either a redshirt or was going to join the team this coming year. That is how much I recall hearing about him this season. I hope that he finds success and happiness wherever he goes.

Now this has to be entirely development related. I'm guessing the coaching staff doesn't see growth potential after year one and we're about to make room for the Marquette transfer (?) That would be huge. fingers crossed this means something good and not another unexpected case of players fleeing the ship before impending penalties by the NCAA...

so we are recruiting great practice players ,we recuit players based on potetial.we recruit players to stash until Self feels they are ready .PLAYERS DONT WANT TO WAIT ANYMORE What players see is when a team is struggling that they feel they want to help the team .I imagine Jossell will be next . A comment was made about Self is a career killer If they dont play they dont stay.Not knowiing how NBA GMs and scouts evaluate talent Enaruna was on their radar so they saw something there . Someone posted yesterday that Diallo didnt get minutes because he was behind Ellis Mickelson Traylor and Lucas ,bur Diallo was the only one drafted Maybe Self meant we need to get less athletic and slower .

Diallo was suspended by the NCAA for the first nine games of the season, which had a big impact on him fitting into the rotation. Diallo had the talent to start but he was nine games behind everyone else thanks to the paid travel issue. And let's not forget that Diallo is the third player named in the NCAA violations. It might end up being a good thing that he didn't play in more games once the NCAA investigation in finished.

Bryce there is some trurh to your question ,.When you recruit an unknown player and that unknown player leaves that is a good question If he was a good practice player practicing against the first team but he wasnt good enough to play against bad basketball teams e.g Iowa State ,TCU and the likes ....either he can play or he cant .........We only know what Coach Self says ....he is athletic and he will be a good player .....arent we suppose to keep those players around

A lot of people are griping on here about all the transfers but it would be interesting to see how our transfers (not just this year but over the last few years) compare to other top programs. I doubt that our numbers are really that different; we're just seeing ours and not others.

And of course this year the number of transfers is probably going to break a record, with the combo of getting an extra year and (likely) getting to transfer without having to sit out a year.

It is correct--many fans get upset about the transfers and have not adjusted to the new overall reality of the open portal. I'm not sure if this is a one year pandemic thing that goes without the penalty, but I read there are 1,000 names in the portal. Even before the lax portal rules, transfer players are becoming more of the norm. Schools in the 100-320 range of D1 are minor leagues. Players not in the top 50 of recruits can play right away and get two to three years and 80-90 games of solid playing time and then finish their career in a power 5 if good enough. Power 5 recruits that have to wait years might go the other direction. The championship game this year will likely pit Gonzaga against Baylor. 2 of the 7 top Gonzaga rotation players are transfers and 4 of Baylor's 8. That is 6 of 15 rotation players that transferred into these institutions and the championship game.

Matt, Yours is a great explanation! It's amazing how few of the Baylor/Gonzaga players were top 40 HS recruits. (I think Timme was ranked below McCormack.) I don't blame kids who want to see their practice time rewarded with significant minutes. You only get one college career.

I'm more confused when a starter leaves. I'm thinking about Grimes who's in the FF as Houston's leading scorer. I'd like someone to remind me, if it was ever really known, what the reason was for him leaving. We could have used him. And if someone knows, what's the salary for an un-drafted, non-NBA player like Dotson?

Guess I'm "old school" since I don't like this transfer mess...seems too much like professional teams where the teams change so much year to year. No one has any ability to stick with their commitments now days.

That being said...is Self just signing these players to provide "bodies" when they are originally recruited?

Hell half of next year's roster is going to be "new blood."

I have no problem with players transferring. Schools can recruit over players and can revoke scholarships. And some players are just not a good fit at a school for whatever reason. It's only fair for a student-athlete to have the right to leave if they believe a move is in his/her best interests.

The article(s) is about a transfer, so I guess it is expected to be hyper-focused on transfers. It’s still a bit humerus to see some critical of Coach, but then that’s to be expected as well. We did after all lose our last game.

The reality is that there are players that have learned to play here and stuck around to develop. That unfortunately is becoming less of the culture we live in.

Coach will continue to be successful and we might even become the winningest program. The college landscape is definitely changing, and I would venture to say it’s mostly an iceberg.

Even when the roster is finalized, none of the returning starters, can expect to start next year, unless they earn it.

Obaji, Braun, Wilson, McCormack; I love them all, but which ever one does not improve next year, will be key coming off the bench.

Thompson,a 5 star recruit, is the one who should be much better next year.