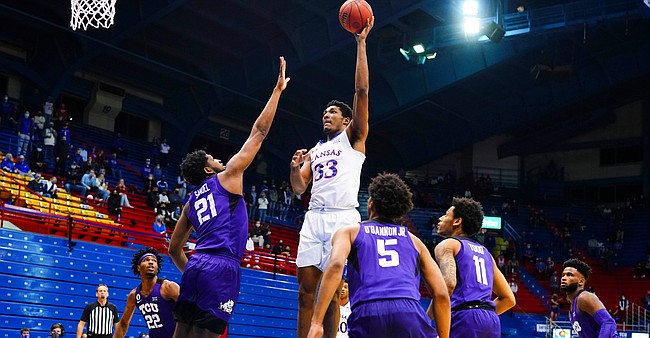 Kansas forward David McCormack (33) turns to put up a shot in the paint over TCU center Kevin Samuel (21) during the first half on Thursday, Jan. 28, 2021 at Allen Fieldhouse.

Kansas forward David McCormack was voted by the conference’s coaches as the Big 12’s Most Improved Player for the 2020-21 season.

McCormack is the second ever recipient of the newly created Big 12 postseason honor, and he was one of five Jayhawks to receive some love from the Big 12 coaches on Monday.

A junior from Norfolk, Va., who has started 27 games for the 11th-ranked Jayhawks, McCormack led the Big 12 with a shooting percentage of 53.6% in conference games.

He also ranks third in the Big 12 with six double-doubles and he reached double figures in scoring in 17 games, including 11 of the last 12.

After averaging 6.9 points and 4.1 rebounds per game in 18 starts last season, McCormack bumped his numbers to 13.1 points and 6.1 rebounds this season.

That was enough to land him a spot on the all-Big 12 second team, where he joined teammate Marcus Garrett.

Senior guard Marcus Garrett was a unanimous selection to the Big 12 all-defensive team. And he and McCormack received second team all-Big 12 accolades.

Junior Ochai Agbaji and sophomore Christian Braun received honorable mention nods. And redshirt freshman Jalen Wilson earned a spot on the all-newcomer team and also was a unanimous pick for the all-freshman team.

Monday’s announcement marked the first time since the 1999-2000 season that the Big 12 coaches did not vote a Kansas player to the first team.

And it did not bother Self a bit.

“I thought it was actually pretty fair,” Self said Monday night. “I think Ochai could have been on one of the teams and I think Jalen should have been honorable mention. … So I’m disappointed that didn’t happen for Jalen, but, geez, that’s not a big deal. He’s going to have more opportunities in the future to do that.”

McCormack and Garrett were joined by Andrew Jones of Texas, Mac McClung of Texas Tech (newcomer of the year) and Miles McBride of West Virginia on the second team.

Baylor's Scott Drew earned the Coach of the Year honor. Coaches were not allowed to vote for their own players.

Congrats to Dave!! a well deserved title.. Next season, hopefully we'll add another:

Is t that like telling your wife, “you know, your butt is t as far as it used to be” ?