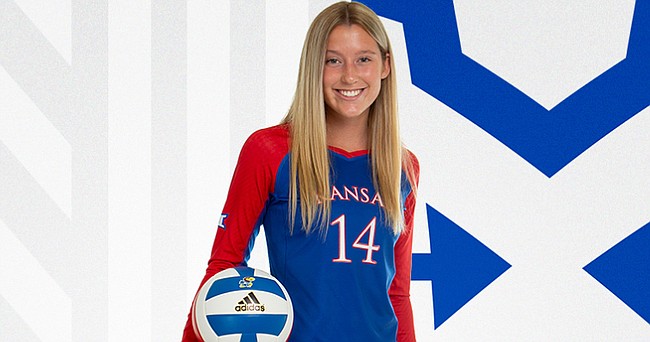 KU freshman Caroline Bien, of St. Thomas Aquinas, has been named the Big 12 Conference's Preseason Freshman of the Year.

For the second year in a row, the Kansas volleyball roster features the Big 12 Conference’s Preseason Freshman of the Year.

In 2020, it was local prospect Caroline Crawford who earned the honor, and this year Caroline Bien received the early recognition from the Big 12 coaches.

Bien, a product of St. Thomas Aquinas High, was the Kansas Gatorade Player of the Year and No. 14 overall prospect in the Class of 2021 by PrepVolleyball.com.

Bien, who played both outside hitter and libero in high school, led the Saints to a 29-2 record and Class 5A state title last season and also was named a first team All-American by the American Volleyball Coaches Association.

"Caroline has elite platform skills (and) has developed into a high-level attacker as well," KU coach Ray Bechard said when Bien signed with Kansas last November. "This combination will allow her to significantly impact our program as a six-rotation performer. Caroline has great feel for the game, she is a proven winner and she has a lot of great volleyball ahead of her."

Bien was joined on this year’s preseason all-Big 12 squad by Crawford, now a sophomore, and super senior Jenny Mosser.

As a freshman, the standout middle blocker from Lansing High appeared in all 22 of KU’s matches and earned both first team all-Big 12 honors and a spot on the all-Big 12 Rookie Team.

Mosser, who came to KU from UCLA prior to the start of the 2020 season, also earned first-team all-Big 12 honors last season after leading KU in kills (229) and kills per set (3.37) in the 18 matches in which she appeared.

With all 16 players from last season’s roster returning and four newcomers joining the mix, KU will field its largest roster in school history this fall.

The Jayhawks will open Big 12 play at Texas Tech on Sept. 24 before hosting Iowa State Oct. 1-2 in the program’s first Big 12 home series of the season.