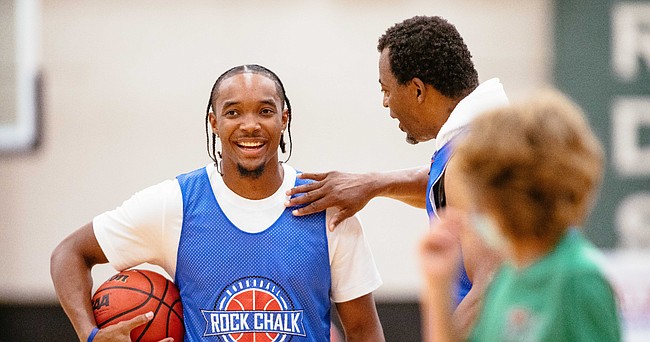 In short, it’ll be more of the same from the Raleigh, N.C. native and fourth-year pro, who just was moved from Charlotte to New Orleans as part of a sign-and-trade deal worth $47 million over the next four years.

“I don’t let that kind of stuff get to me,” Graham said after Thursday’s Rock Chalk Roundball Classic in Lawrence. “But I’m excited for the contract. It’s definitely life changing — it’s a blessing — but I’m going to remain who I am and who I’ve been.”

After being selected by the Hornets in the second round of the 2018 NBA draft, Graham signed a three-year rookie deal that paid him just over $4 million for his first three NBA seasons.

Steady and strong play during that stint, particularly during the past two seasons, made Graham a bona fide starter and somewhat of a commodity around the league. His big scoring nights and 3-point shooting prowess — which paired nicely with his surging confidence — made him a household name among NBA fans in his home state.

But even with that comfort and the dream-come-true scenario of playing for the pro team he grew up watching, Graham always knew that things could change quickly.

“Obviously, you always hear everybody saying it’s a business and this and that,” Graham said. “And it’s been crazy all summer because you just never know.”

In a matter of about 24 hours last week, Graham, who scored 19 points and delighted the crowd during Thursday's Roundball Classic, found out exactly what business in the NBA is all about. He said his agent had given him a heads-up that change could be coming. And that allowed the former KU All-American to enter free agency with his eyes wide open.

“I kind of started mentally preparing myself that maybe I won’t be in Charlotte,” he said. “But I’m happy with it, and you’ve just got to go with life, man.”

In town for the Roundball Classic, Graham has yet to make it to New Orleans to meet his new teammates and check out his new surroundings. But that’s coming in the days ahead. And he’s looking forward to the fresh start.

“I’m excited to get down there and start this new journey,” he said.

With his time with Charlotte now in the rearview, Graham said the franchise would forever hold a special place in his heart. Graham will always remember the Hornets, most notably GM Mitch Kupchak and owner Michael Jordan, as the organization that gave him his first crack as a professional and the chance to live out a dream.

“Being from there, being from NC and being able to represent the NBA team and my state and my city (Raleigh), it was a blessing,” Graham said Thursday night. “I appreciate everybody in the organization who gave me a chance to be there to represent them and my family.”

Congratulations to Devonte'! So well deserved. A New Orleans Pelican now, and a lifelong JAYHAWK.

this is so awesome! what a well deserving young man and Jayhawk. Congratulations Devonte!

I love Devonte and it's great that he's getting paid well, but let's be serious: $4 million for three years would be "life changing" for most of us. It's a little silly to say that this new contract is life changing.

That was my thought Len. Heck, 10% of it would be life changing for most college graduates though I don’t know how much of it they actually get after agents, etc.