Beaty testified that he had a verbal agreement to accept the job at Texas, and that he was even given a Texas university identification number. But then, Beaty said, Long called Texas AD Chris Del Conte and mentioned "egregious behavior" by the 49-year-old coach. After Long's call, Beaty said, the job offer seemed to be off the table — and Beaty has since had to make a living as an Uber driver and motivational speaker.

Beaty currently works at a fireproofing company in Dallas while he continues to seek long-term football employment, he testified. A Texas athletic department spokesperson did not return a request for comment Wednesday seeking confirmation that Beaty had, in fact, been offered a position at the university.

Beaty's 247-page, wide-ranging deposition focused on allegations that he used more coaches than are permitted by NCAA rules — the justification Kansas Athletics used to fire him without paying a $3 million buyout — as well as his knowledge of the firing process.

The former coach, who was with the university for four seasons, named high-profile KU donor families — the Andersons, Fritzels and Sutters — in addition to former Williams Education Fund Director Matt Baty as people who told him the KU athletic department was searching for a reason not to pay him his buyout money.

Beaty disputed the allegation that he used former video coordinator Jeff Love as a countable coach, and he also disputed several former KU quarterbacks' accounts of Love occasionally running position meetings when Beaty had to be elsewhere.

Beaty's deposition was unsealed Tuesday after a series of rulings from a federal judge in Kansas City, Kan. U.S. District Judge Kathryn H. Vratil also denied Beaty’s request to have a portion of the lawsuit against Kansas Athletics ruled on without a trial.

Beaty and his team of Texas-based attorneys asked in December for a summary judgment on whether KU’s athletic department breached his contract by retroactively firing him for cause and not paying a $3 million buyout after discovering potential NCAA rules violations.

To be granted a motion for summary judgment, a party must show that no material issues of fact are in dispute and that the case can be decided as a matter of law.

Vratil did not find grounds for summary judgment, ruling that Beaty was “attempting to read into the contracts a right that is not there.”

Put simply, Vratil found the contract was written in a way that leaves the reasons KU would have to fire Beaty open to interpretation. The contract also doesn’t prohibit KU from going back and firing Beaty with cause, and it’s not within the court’s right to add language to a contract, which is what Beaty’s team was asking the judge to do, Vratil said.

Vratil went on to say the factual record “creates genuine issues of material fact on (Beaty’s) claims that (Kansas Athletics) breached their agreements by terminating Beaty’s contract without cause and refusing to make the required payments.”

The crux of Beaty’s defense is layered. He argues that his contract states that the primary and only relevant function of his contract was coaching the KU football team and that not meeting performance standards wasn’t a justified cause to fire him without paying a buyout.

The contract, Beaty’s team argues, is ambiguous about whether his duties extend to maintaining a culture of compliance with NCAA rules and regulations — which is what KU Athletics is using to justify not paying Beaty’s buyout costs.

Vratil disagreed with that argument in Tuesday’s filing. The contract, while ambiguous in some areas, is clear that Beaty’s job was to ensure the football program was in line with the rules of the sport’s governing body, she said.

Since Beaty’s motion for summary judgment was denied, the case will go to a jury trial if it is not settled. The deposition seemed to indicate the case was headed for a trial, as one of Beaty's attorney made a comment that he would "reserve our questions for the time of trial" as the deposition ended.

It's currently unclear what the timeline is for the case's legal progression, but there are still outstanding material requests that could shape how it unfolds.

Namely, Beaty's lawyers on April 1 signaled their intent to subpoena T.J. Gassnola, the former Adidas executive embroiled in KU basketball’s ongoing recruiting scandal, for any relevant documents on KU’s relationship with Beaty; those documents have not been unsealed.

Summary: As a point of argument, Beatty asked to get money early claiming contract did not cover performance or complaince. KU says "No" and Judge agrees. Trial is next with jury, and media. But first, judge unseals documents, as it goes toward's "intent" and shows coach Les Miles' recent non-compliance so that everyone can compare it to Beatty's situation... meanwhile the media has a hay day until date of trial. At which Grassnola spews everything the FBI would not to the NCAA from the NIKE trial and confirms that Long planned to fire Beatty from day one anyway.

I see no brigthside in this for KU. To me, there is not one thing in that time line that is in KU's favor. I don't see how KU has any offense in this at all and all we can do is defend against accusation and revelation. IMO, KU needs to make this go away....and fast.

If Gassnola spews everything the FBI would not to the NCAA from the NIKE trial, it might be time to fire Long for cause.

There are some things in this story that make me questions Beaty’s credibility.

What possible motive would Long have in sabotaging his chance of finding work?

He made I believe in excess of $6m during his four seasons and now he is reduced to driving for Uber. Really?

Every time I interviewed for a new job... and every time I seriously considered hiring a new employee, the references were contacted, especially previous employers. My guess is that Texas contacted Long for reference and Long gave his opinion. To NOT contact previous employers would amount to not properly doing the hiring job. What we don't know is the relationship between Beaty and Long during his employment and, especially, after his firing. The "egregious" behavior may well be a valid description. Or not. We don't know.

Whether Long intended to fire Beaty from the first day of Long's term as AD is irrelevant. His job coming in was to assess the department and make appropriate changes as needed. With Beaty's record it's a no-brainer that Beaty should be replaced. That much any of us could see even prior to Long's hiring. This is a non-issue to me.

What NCAA Division 1 coach has no network amonst his profession?

This legal battle between Long and Beaty is more entertaining than any of Beaty's KU football teams ever were!

Good thing I get real entertainment during football season from the Iowa Hawkeyes! 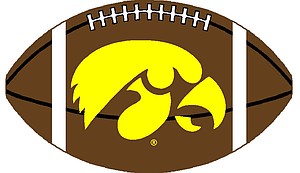 Can someone with some photoshop skills please put Beaty's face on Chris Farley as motivational speaker?

What Self's program did or didn't do is not material to Beaty's KU operations. His lawyers are simply trying to throw shade over the department in hopes of a out-of-court settlement. But it won't work in court.

Incorrect. If what Beaty allegedly did.. constitutes firing for just cause. Then if and when Self and for sure Townsend... get found culpable for alleged illegal recruiting practices... they should be held to the same standard. Clearly, that won't happen. So it really isn't being fired for "just cause", now is it? And KU self-reports Beaty... and claims to never even having had a conversation with Townsend about it. A total joke...

This is the first time, I've heard that Beaty and attorney's were saying that compliance was not part of his role.

Terrible look for KU. Just pay the guy. Weiss is getting way more for nearly zero effort. And now that Les Miles is starting to have mental problems KU would be better served to look to start looking to the future. Burying a fired coach who had a relatively small contact to begin with isn’t exactly going to help with our next hire.

Lance, gossip is not a good look either.

So after reading this....

1) I still feel like he should have been paid as per his contract.

2) This is the first time I think Beatty is reaching because there is no way he was getting the UT job after his KU gig.

3) I still think they should have paid him and this makes KU look terrible to outsiders, insiders, and prospective candidates down the road.